(Minghui.org) A 66-year-old physician in Haining City, Heilongjiang Province was beaten to death by the authorities for her faith in Falun Gong, a mind-body practice that has been persecuted by the Chinese communist regime since 1999. 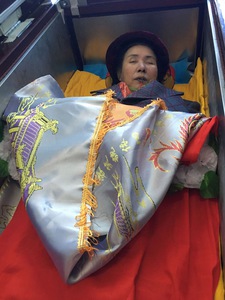 Ms. Wang Shukun was a doctor of internal medicine at Hailin Town Hospital in Hailin City. She hadn’t gone to work for months due to the coronavirus epidemic outbreak. In late June 2020, she received a call from Han Yan, the Party secretary of the hospital, and was told that Chen Guangqun, the president of the hospital, was looking for her.

Ms. Wang thought that the hospital was arranging for her to return to work. When she got to the hospital, it turned out it was officers from Hailin City No. 1 Police Station who were looking for her. The officers attempted to force her to write statements to renounce Falun Gong and to acknowledge that her husband, Mr. Yu Xiaopeng, also practices Falun Gong.

Mr. Yu, a surgeon at the same hospital, was fired 29 years ago for refusing to fabricate medical records as directed by the then-hospital-president. He had been petitioning all these years and was considered a primary target by the authorities, who tried to further the persecution of him by claiming he also practiced Falun Gong when he never did.

Ms. Wang suffered sharp pain in her leg and begged for the officers to let her go. They agreed, but threatened that they would find her again a few days later.

Ms. Wang had to crawl up the stairs to get back to her apartment unit. Her husband noted she had bruises on her body. Her kneecaps were broken, and she was soaked in sweat.

Ms. Wang suddenly suffered cerebral hemorrhage in the afternoon on July 1. She was very dizzy and felt like throwing up. She passed away around 4:25 a.m. on July 2. Her body was cremated on July 4.

After Ms. Wang’s death, the police kept harassing Mr. Yu and demanded him not to report this to the Minghui website.

Ms. Wang was earlier arrested on her way to work by officers from the Hailin City Domestic Security Office in 2010. The police ransacked her home and gave her a forced labor camp term. Due to her health condition, she was denied admission and released after being extorted several thousand yuan by the police.

Husband Chased by Police for Three Decades for Persistent Appeal

Ms. Wang’s husband, Mr. Yu, used to work at Hailin City Hospital. Twenty-nine years ago, a patient who suffered injuries in his thigh died after an accident during anesthesia. As Mr. Yu was the physician on duty when the accident happened, the hospital’s president, Luan Yuling, pressured him to make false claims that the patient had injuries in his aorta and that he died from excessive bleeding.

As Mr. Yu refused to provide the false account, he was fired by the hospital. He later opened a private clinic.

For the next 29 years, he kept going back to Beijing to appeal for his case and the police had been attempting to arrest him all these years. At one point, officials from Hailin followed him to Beijing to stop him. They beat him into a coma. Thinking that he had died, they attempted to bury him in a suburban area. During the process, Mr. Yu suddenly woke up. The officers were startled and ran away.

As there is an unwritten policy in the persecution of Falun Gong that practitioners beaten to death would be counted as having committed suicide, Mr. Yu suspected that the police attempted to accuse him of practicing Falun Gong to justify going after him again.