(Minghui.org) Falun Gong practitioners from Stuttgart and surrounding areas returned to King Street [Königstraße] to hold a Falun Dafa information event on June 27, 2020. As practitioners have held similar activities at the same spot for many years, several people who'd learned about the mind and body practice through past events came over to sign the petition calling for an end to the persecution in China. 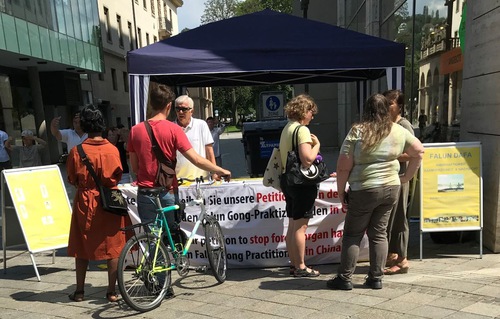 Passersby stop to read information on the display boards about Falun Gong. 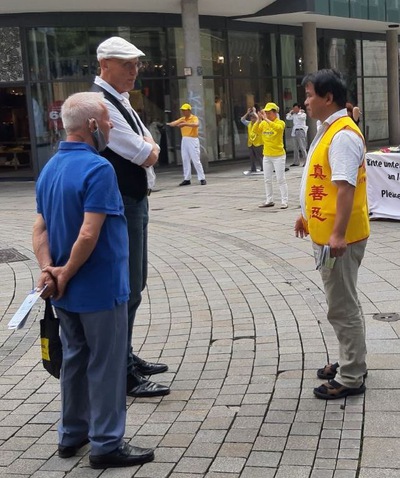 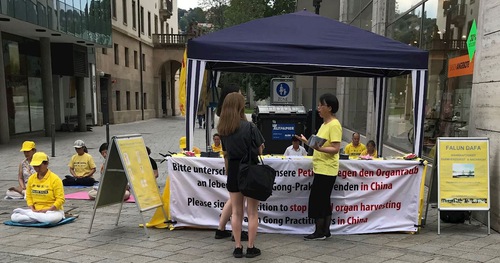 A middle-aged woman walked up to the information booth and signed the petition calling on the German government to help stop the Chinese regime's forced organ harvesting of prisoners of conscience (the majority of whom are Falun Gong practitioners). She told practitioners she had seen reports on television regarding the atrocities committed by the Chinese Communist Party (CCP). Being from Latvia, she clearly understood the tyranny and autocratic rule of Communist regimes. She said, “I believe this is true, and that’s why I want to sign the petition.”

Another woman stood quietly reading the information on the display boards. Practitioners offered her a flier and introduced Falun Gong, and spoke about the torture faced by practitioners in China. Two young women also stopped to listen. All three of them signed the petition.

A young man was drawn to practitioners demonstrating the exercises. He stopped to watch, and asked what the exercises had to do with the organ harvesting mentioned in the brochure. He was very shocked when practitioners explained to him that the organs of prisoners of conscience detained in China were removed and sold for a profit. He signed the petition to end the harvesting of organs from living Falun Gong practitioners. He also expressed interest in learning the exercises and asked for information about local practice sites.

An elderly man told practitioners that he did not believe that signing the petition would help, because the German government only cared about economic benefit. He said that they never paid attention to human rights violations in China. Practitioners told him that through the signature campaign, people learn about the terrible things taking place in China and they have the opportunity to support justice. Furthermore, without international pressure, the CCP would simply continue to trample on human rights. A man next to him agreed, and, inspired by what the practitioners said, he signed the petition to show his support for practitioners calling for justice.

“Electrical Plug Finally Plugged in: How I Obtained Dafa”