Once Imprisoned for Eight Years, Hunan Woman Arrested for Her Faith Again

(Minghui.org) A group of police officers broke into Ms. Lu Mengjun’s home on June 2, 2020 and arrested her for her faith in Falun Gong. They confiscated her printer, some Falun Gong informational materials, as well as 1,000 yuan in cash. Her family has been denied visitation and they are also kept in the dark as to where she is being detained.

Because of speaking up for Falun Gong, Ms. Lu Mengjun was repeatedly arrested and sentenced twice to a total of eight years. Her younger sister was forced to live away from home for three years after escaping an arrest on June 4, 2007. Their 80-year-old father was also forced to go into hiding to avoid police harassment. The mental pressure from the persecution took a toll on the younger Ms. Lu. She passed away on January 29, 2011, only months after she returned home. She was survived by a toddler son.

Because of distributing informational materials about Falun Gong, Ms. Lu was arrested on February 4, 2004 and later sentenced to four years. She was held at Shuangfeng Prison for one year and served the remaining three years at Hunan Province Women’s Prison.

As Ms. Lu refused to renounce Falun Gong, the guards handcuffed her arms behind her back, with one hand pulled over her shoulder to meet the other hand twisted upwards from her back. The excruciating torture caused the bones of her right hand to be exposed. Her left arm was completely bruised and she struggles to lift her right arm even now. As the guards repeatedly handcuffed her in this manner, the injuries on her wrists were unable to heal. 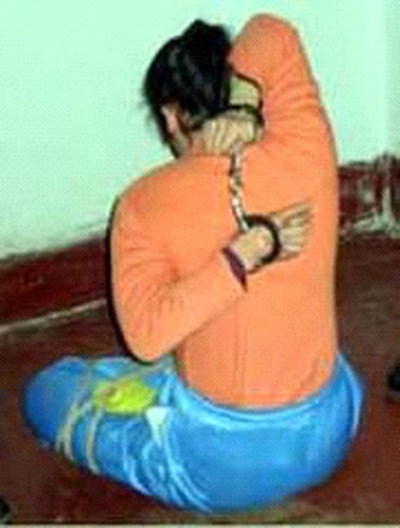 Torture reenactment: handcuffed with the arms behind one’s back

The day after she was released on February 3, 2011, Ms. Lu was arrested again and sent to Wujiahuayuan Brainwashing Center.

Seven months later, she was arrested once more at home on September 27, 2011 and sent to the brainwashing center again.

Ms. Lu was arrested for the fourth time, on September 2, 2013, for distributing Falun Gong informational materials. She was sentenced to four years on March 25, 2014. Her mother, in her 70s, was not allowed to see her when she traveled all the way to the Hunan Province Women’s Prison.