(Minghui.org) Twenty-one years ago, on July 20, 1999, the CCP (Chinese Communist Party) initiated the persecution of Falun Dafa, a peaceful self-cultivation practice. Practitioners around the world hold events every year to commemorate fellow practitioners who have lost their lives due to this persecution. Practitioners in upstate New York held a candlelight vigil and small scale activities to remind people that the persecution is still going on and to protest the CCP's ongoing brutality. 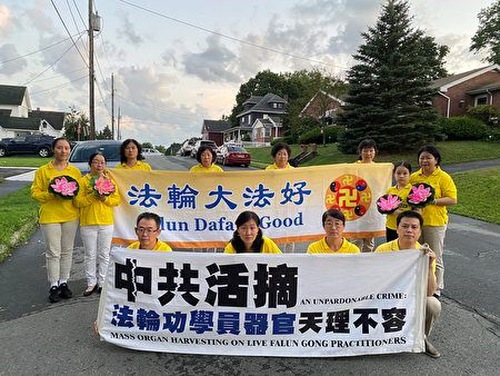 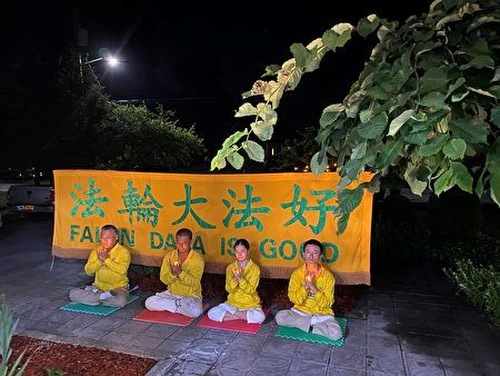 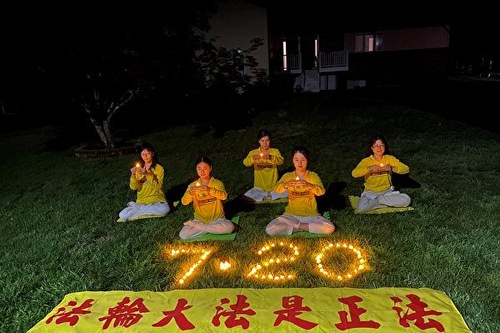 On July 17, 2020, practitioners in upstate New York held a candlelight vigil and activities to remind people that the persecution in China is still taking place.

Ms. Fang Siyi lives in New York but is originally from Jilin City, China. She was detained and tortured in China because she practices Falun Dafa. Her brother, Mr. Fang Caijie, also a Dafa practitioner, was tortured to death for refusing to relinquish his belief.

Ms. Fang said, “My brother was the director of a police station in Baishan City, and began practicing Falun Dafa in 1998. He became very diligent and dedicated and helped solve many murder cases. He did not get involved in internal conflicts or corruption. Because he was a practitioner, however, he was forced to resign.”

Ms. Fang said that in 2000, her brother and several other practitioners began producing truth-clarifying materials. He was arrested by officers from the Huadian City Police Department on his way to distribute them. “Those policemen were afraid of my brother since he was a policeman and knew the law. So, they adopted a more obscure but cruel method of persecution.

“They put a thick book on my brother’s chest, and then repeatedly hit the book with a truncheon. This kind of torture causes serious internal injuries but they are not visible. His lungs were severely damaged. He was in unbearable pain and vomited blood.” His family received a phone call in 2005 and were told, “Fang Caijie had a car accident and his life is in danger.” When his family rushed to the hospital, Mr. Fang was barely breathing. “His head was heavily bandaged, and his upper body was covered in bruises. It was too late.”

Ms. Fang Siyi said, “We were later told by people who were there, that my brother was beaten to death by the police.”

Ms. Fang said, “In China, torture which results in a [Falun Dafa] practitioner's death is counted as suicide. This is the CCP's persecution policy against Falun Dafa. It has been verified that 4,544 Falun Dafa practitioners have been persecuted to death, and countless others have disappeared after their organs were taken by the CCP.

“It is the wish of the kind-hearted Chinese people to dissolve the CCP and bring Jiang Zemin (the former CCP head who initiated the persecution) to justice,” Ms. Fang said. 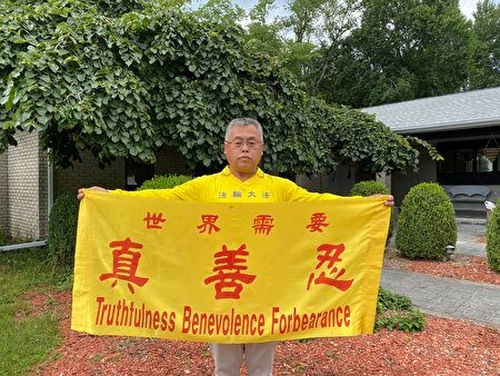 Mr. Guo Yulong, originally from Liaoning Province, China, also recounted his experience of being illegally arrested on May 20, 2001 and detained for six years. He said, “I was subjected to multiple tortures in Panjin Forced Labor Camp. I was held in a cage, deprived of sleep, and beaten by a gang of people. They poked my eyes, and put me in a 'flying plane' position (legs stretched straight and hands touching the ground). They took turns beating me and caused my fourth and fifth lumbar vertebra to be severely misaligned.

“When the guards saw that brutal torture failed to make me give up my belief in [Dafa's principles of] Truthfulness-Compassion-Forbearance, they secretly added nerve-damaging drugs when they force-fed me. After each feeding, my internal organs were extremely uncomfortable.

“I became emaciated. My stomach was like a bag dangling inside my body. All my hair fell out. I couldn’t remember anyone's name. I looked like a survivor of the Nazis’ Auschwitz concentration camp during World War II.” 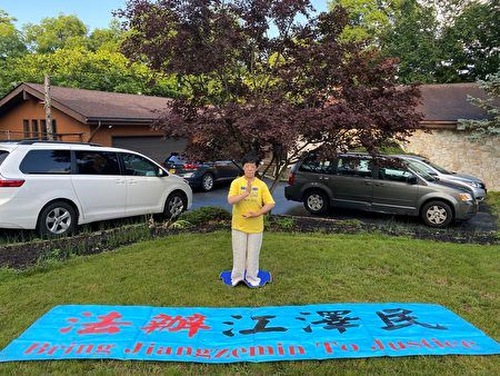 Practitioner Ms. Han Lianxiang from Dalian, Liaoning Province, displays a banner with the message, “Bring Jiang Zemin to Justice” on her front yard.

Ms. Han Lianxiang originally from Dalian, Liaoning Province, China was arrested in July 2008, because she met with lawyer Gao Zhisheng and his assistant who came to Dalian to collect evidence of the persecution of Falun Gong. The Domestic Security police arrested and tortured her. They covered her head with plastic bags, beat her with rubber sticks, pinched her nose to force-feed her alcohol, inserted cigarette butts into her nostrils, tied her to iron chairs, and shocked her with electric batons.

Ms. Han said, “This persecution was initiated by Jiang Zemin – former head of the CCP. Bringing Jiang to justice is a manifestation of justice. Good is rewarded and evil will meet retribution. Party members who actively participated in the persecution of Falun Dafa, such as Bo Xilai, Zhou Yongkang, Su Rong, Xu Caihou, Li Dongsheng, Wang Lijun, Sun Lijun and so on, have been imprisoned or died suddenly.”

Ms. Han added, “Democratic countries impose sanctions on people who violate human rights. Twenty-eight countries have already enacted or are preparing to enact the Global Magnitsky Human Rights Accountability Act. They will refuse to issue visas and freeze the persecutors’ assets. In recent years, many people have been denied visas because they participated in persecuting Falun Dafa.” 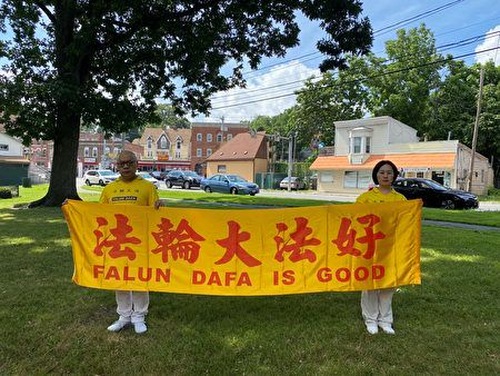 Mr. Ge Zhigang and his wife Ms. Li Li display a banner in Chinese and English with the words “Falun Dafa is Good” to protest the CCP’s mass arrest of fellow practitioners in their hometown 21 years ago.

“We call on the international community to stop the CCP’s persecution of Falun Dafa. According to statistics from Minghui.org, in the first half of 2020, CCP police arrested 5,313 Falun Dafa practitioners across 238 cities in 28 provinces, municipalities, and autonomous regions across the country. ”

Ms. Li Li noted that on June 23, 2020, Changchun city – which was her hometown, issued a notice to dismantle the satellite TV ground receiver (commonly known as “small pot cover”) before July 15. Those who didn’t dismantle the device would be fined, have their equipment confiscated, and so on. People are being forced to demolish the devices.

“Changchun forces people to dismantle and destroy satellite receivers. A discerning person knows at a glance, this is done to prevent the people from watching New Tang Dynasty TV [an independent TV station that broadcasts uncensored news about China]. The CCP maintains its rule by violence and lies, what it's most afraid of is people knowing the truth.”

Ms. Li Li said, “The number of people who have withdrawn from the Party, the Communist Youth League, and the Young Pioneers on the overseas website has now exceeded 360 million. This is the spiritual awakening of the Chinese people after they learn the truth.”

Mr. Ba Xuerui and his family, relatives, and friends printed bilingual banners that read, “Falun Dafa is Good” and “The CCP’s harvesting of organs from Falun Dafa practitioners is unacceptable.” He said that Falun Dafa is a righteous practice and that justice will prevail.