(Minghui.org) Falun Gong practitioners from Denmark and Sweden came together at the Town Hall Square in Copenhagen on July 18, 2020, and held activities to remind people of the ongoing persecution in China. This July 20 marks the 21st year of practitioners' peacefully opposing the persecution.

This year, 13 dignitaries in Denmark including Margrete Auken, a senior EU member and vice chairman of the Danish parliament to the European Union, Uffe Elbæk, a former Danish Minister of Culture and member of parliament, representatives of different parties of the European Union, parliamentarians, and former members of parliament, signed the Joint Statement initiated by more than 600 politicians from 30 countries around the world. 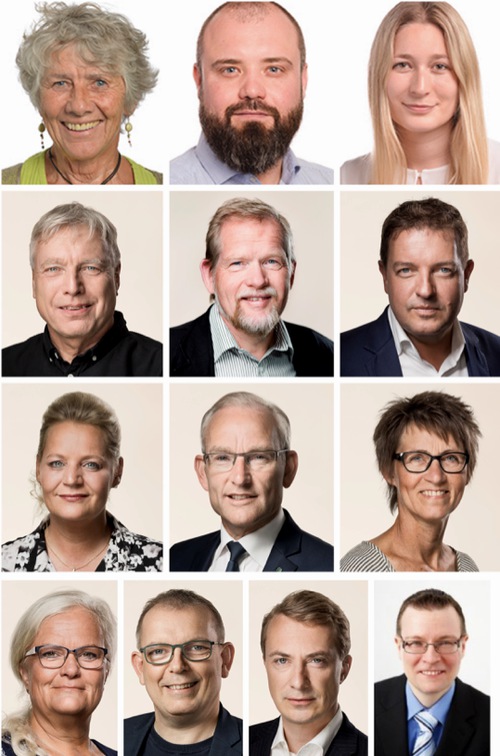 The joint statement stated that Falun Gong (also known as Falun Dafa) is an ancient Chinese practice method based on the principles of Truthfulness-Compassion-Forbearance. The statement also expressed deep concern for the persecution that has lasted for 21 years.

The joint statement urges the Chinese authorities to respect the international norms they have signed and the United Nations International Covenant on Civil and Political Rights, immediately stop the persecution of Falun Gong groups, and unconditionally release all detained Falun Gong practitioners and other prisoners of conscience.

In addition, Søren Espersen, a former deputy chairman of the Danish parliament and a senior member of parliament, also sent a letter of support. In the letter, he expressed his full support for stopping the persecution of Falun Gong. He hopes that Falun Gong practitioners’ anti-persecution campaign is successful. 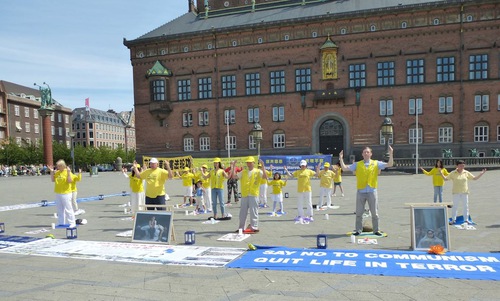 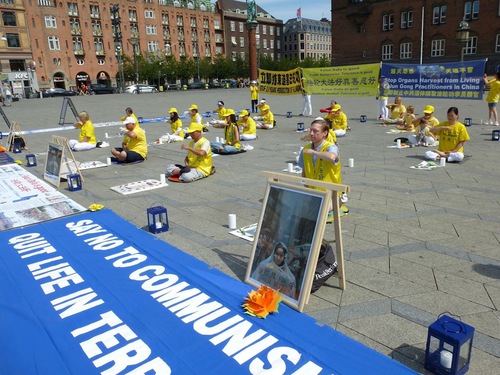 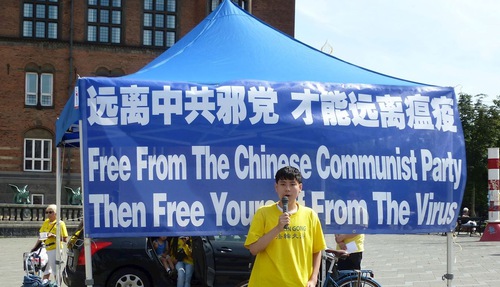 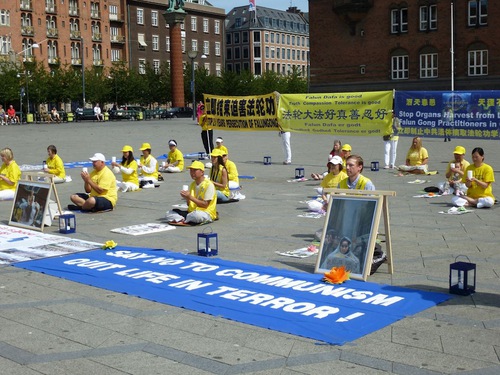 On the afternoon of July 18, 2020, Falun Gong practitioners from Denmark and Sweden held activities at the Town Hall Square in Copenhagen to let people know about the persecution.

Every year, Falun Gong practitioners in Denmark conduct activities around the anniversary of the persecution on July 20 to raise awareness of the situation in China. Many people believe that the persecution will end soon.

The host of the event said, “On July 20, 1999, the CCP launched an appalling persecution against Falun Gong. In the past 21 years, practitioners have been subjected to unimaginable cruel persecution. From being harassed, being tortured and persecuted, even having their organs forcibly taken from them.” 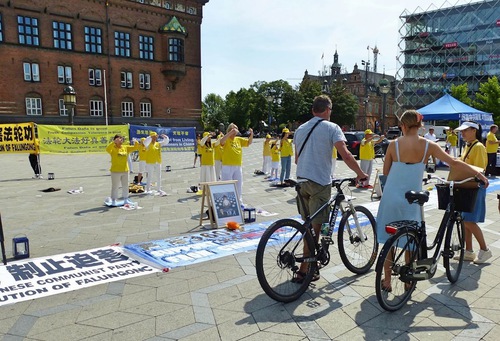 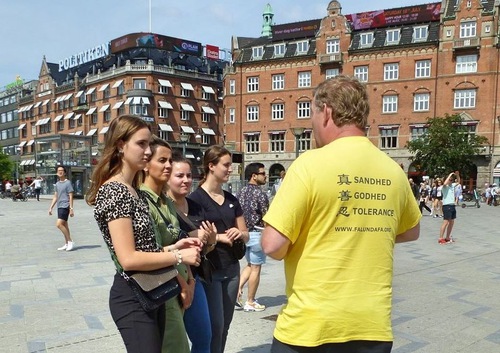 The host also said, “Now the CCP has committed another crime against the entire world. At the beginning of the coronavirus outbreak, the CCP regime chose to conceal information, destroy files and data, and under-report the number of infections and deaths instead of putting people’s lives first. Its cover-up and lies have caused a pandemic in more than 200 countries and regions. However, this pandemic has also made people gradually see the true, evil nature of the CCP.” 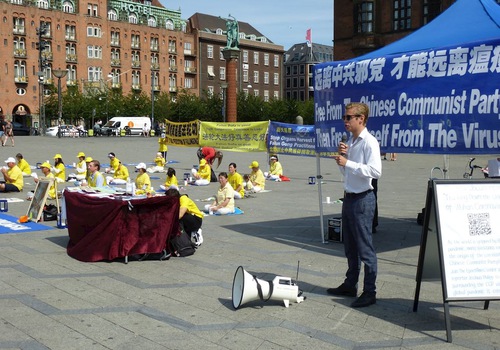 Mr. Thomas Rohden, chariman of the Danish human rights organization Kinakritik came to participate in the event. He said, “The CCP attempts to destroy the world's freedom. The CCP does not care about human lives. They harvest Falun Gong practitioners’ organs and have sent Uyghurs to concentration camps. However, many of us are not aware of these bloody facts!”

He said, “Today I ask the Danish government to wake up from the fog. The Danish government and many Danish politicians don't want to stand up against the CCP because it will cost them and Denmark money. But I believe the price of freedom and the price of humanity are always more important than selling more pork to the CCP! Therefore, I would like to ask Danish Prime Minister Mette Frederiksen, and Foreign Minister Jep Keverde ( Jeppe Kofod) not to ignore the persecution of Falun Gong practitioners and other ethnic groups in China. They must give them freedom and human rights.”

Practitioners Urge Chinese Embassy Officials to Withdraw from the CCP 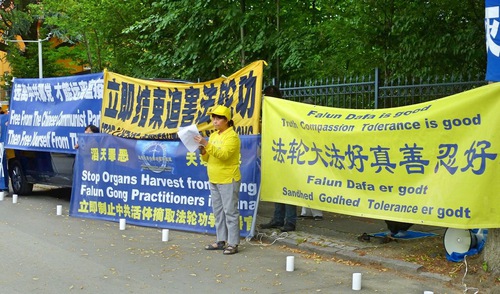 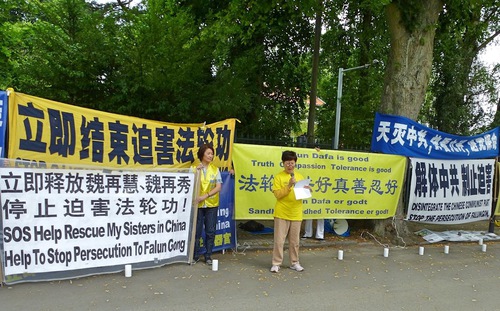 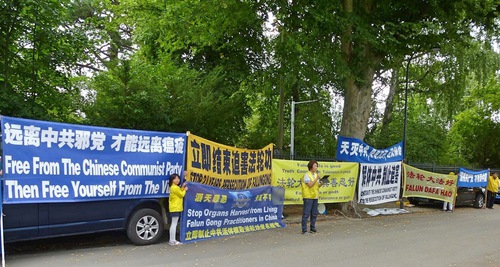 Danish Falun Gong practitioners came to the CCP's embassy in Denmark to call for an end to the persecution and urged the consular staff to quit the CCP.

On the morning of July 20, Danish Falun Gong practitioners came to the CCP’s Embassy in Denmark. They called on the officials inside to judge the situation and make their own decisions at this historic moment when the world is spurning the CCP regime. They encouraged them to withdraw from the CCP and its affiliated organizations.

Ms. Chen Man, a Falun Gong practitioner who was illegally sentenced and imprisoned for seven years, said, “As a Chinese person, whether you are a theist or an atheist, I sincerely hope that you uphold your kindness and do not follow the CCP anymore.”

Ms. Bao Xuezhen, a Falun Gong practitioner who was illegally sentenced to three and a half years in prison by the CCP, said, “I am one of the thousands of Falun Gong practitioners who have been persecuted. During my detention, I was tortured. I was forced to sit on a small bench for a long time. I was not allowed to go to the toilet or take a bath.”

Ms. Bao Xuezhen also said, “The Communist Party has done a lot of evil things. Now Chinese people around the world are quitting the CCP. Please quit the CCP and its affiliated organizations and do not be held accountable for its crimes.”

“Cultivators of Falun Dafa Help Wherever it Is Needed”

“Malaysia: Events Held in Several Cities Calling for an End to the 21-Year-Long Persecution in China”