(Minghui.org) Falun Dafa practitioners in the Ukraine held activities on July 19 and 20 to commemorate the 21st anniversary of peacefully resisting the Chinese Communist Party's (CCP) persecution of their faith. They hosted events in Kharkiv, Odesa, Dnipro, Kramatorsk and other cities, where they called on the CCP to end the persecution.

Practitioners from Dnipro held a commemorative activity on July 19, 2020, in memory of practitioners who were persecuted to the death in China for refusing to renounce their belief. They demonstrated the Falun Dafa exercises, educated the public about the persecution, and introduced Falun Dafa’s basic principles of Truthfulness-Compassion-Forbearance. 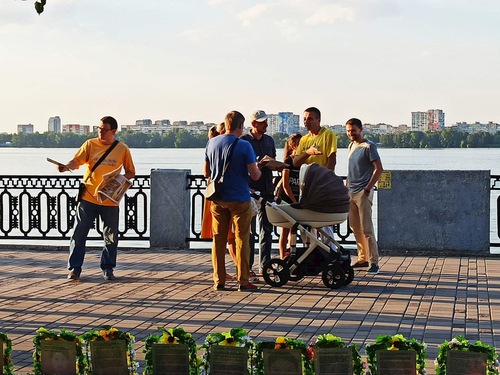 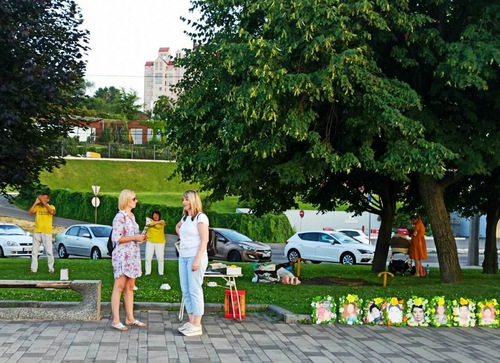 Practitioners in Dnipro held an activity on July 19 to raise awareness of the persecution.

A soldier from western Ukraine said he was attracted by the exercise music and that he could feel strong energy. When he heard that practitioners follow Truthfulness-Compassion-Forbearance, he said that it would be great if everyone followed these principles. He also wanted to learn the exercises.

A young girl was walking along the river with her father. When she saw practitioners meditating, she wanted to give it a try. A practitioner gave her a mat and taught her the movements. She sat down, crossed her legs and meditated. She asked if there were more exercises, and a practitioner showed her the standing exercises and gave her a handmade paper lotus flower. The flower had a pendant with Falun Dafa's website written on it. The practitioner told the girl to visit the website to read the books and see the exercise instruction videos for free. 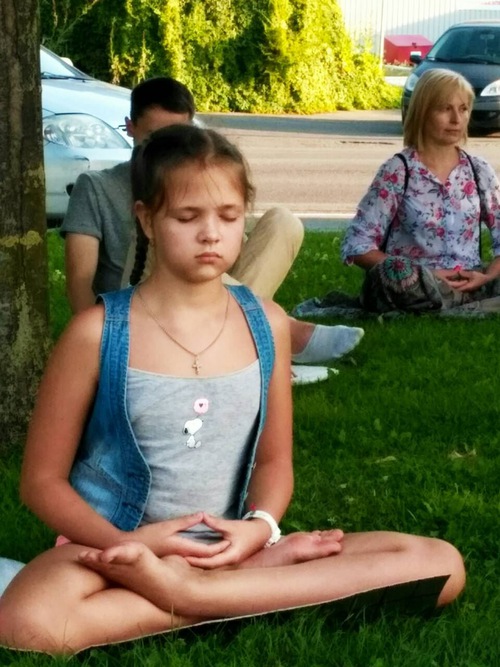 A young girl joined practitioners and learned the meditation exercise.

A young man said he had heard of the persecution long ago and was surprised that it was still going on. “The CCP is truly an evil cult,” he said. 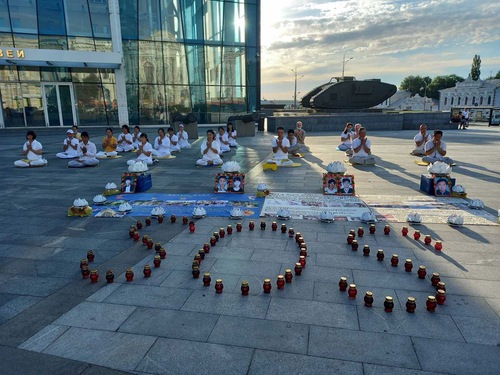 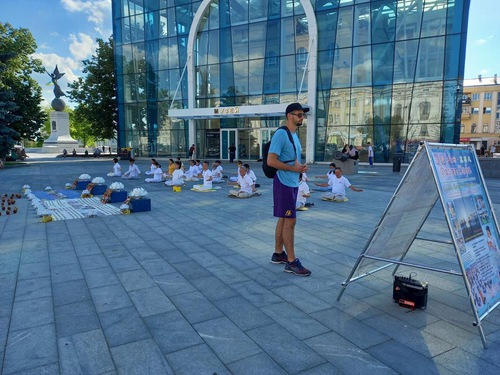 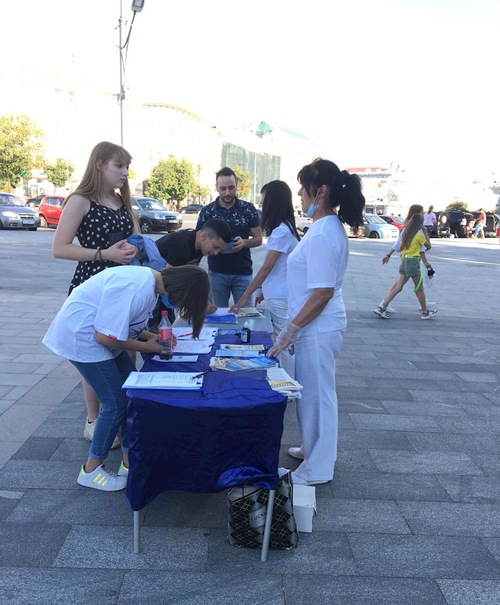 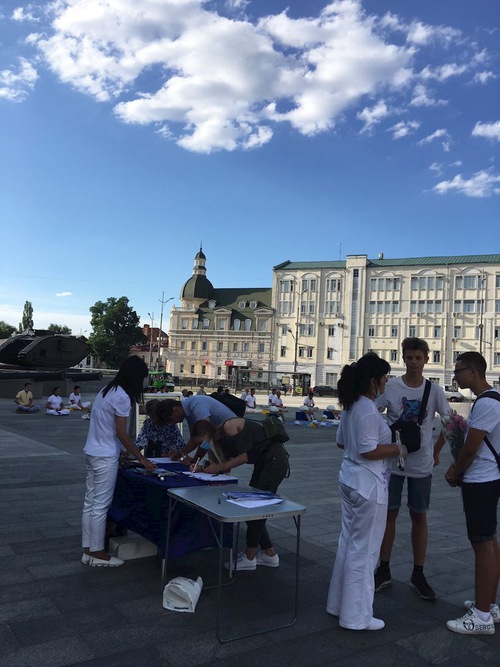 Practitioners in Kharkiv held activities on July 20 to commemorate 21 years of peaceful resistance to the persecution and to educate the public.

At an activity in Kharkiv on July 20, many young people said they knew little about the CCP. While explaining how the CCP persecutes Falun Dafa, practitioners also explained how communism harms individuals and damages the standard of morality in society.

Practitioners explained that the CCP promotes atheism and fears that people will stop believing in communism if they become good people. Communism promotes “falsehoods, viciousness, and fighting,” so communist regimes hate people who cultivate kindness in their hearts, especially those who follow Falun Dafa’s principles of Truthfulness-Compassion-Forbearance, they explained.

Practitioners also reminded young people not to forget the miserable tragedies and crimes that took place in the Ukraine under communism.

Although fewer people were outside due to the pandemic, about 100 people signed the petition to condemn the persecution and call for the prosecution of Jiang Zemin, the former CCP leader who ordered the persecution of Falun Dafa. Some people told practitioners, “You are doing the best thing. We support you.”

Practitioners from Odesa gathered across the street from the Chinese consulate on July 20. Many people asked for brochures, and after learning about the persecution, some signed their names to call for the prosecution of Jiang Zemin.

Every year when practitioners hold a peaceful protest in front of the Chinese consulate, the consulate staff contacts local authorities to send in the National Guard for “protection.” Constrained by the number of people allowed to gather due to the pandemic this year, only a few practitioners stood quietly opposite the Chinese consulate. They demonstrated the Falun Dafa exercises and handed out flyers to passersby. Their activities did not pose a threat to embassy staff.

The National Guard could not take information because they were working, but they listened as practitioners explained the facts. When they learned that practitioners in China are being persecuted for their belief in Truthfulness-Compassion-Forbearance, they said they sympathized with them and supported the practitioners’ activity to resist the persecution.

The guardsmen suggested practitioners bring informational materials to the National Guard headquarters, so practitioners brought copies of How The Specter of Communism Is Ruling Our World, Nine Commentaries on the Communist Party, and Medical Genocide to their senior commanders as gifts.

Dumskaya online news reported on the activity. The article introduced Falun Dafa and how it had received international awards, including from Chinese officials before the persecution began. The report also mentioned that the New York-based Shen Yun Performing Arts was scheduled to perform in Odesa, but the government cancelled the performance due to strong objections by the Chinese Embassy. 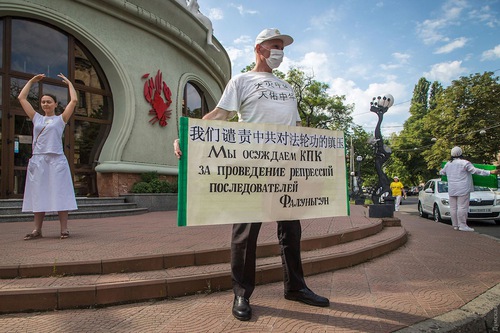 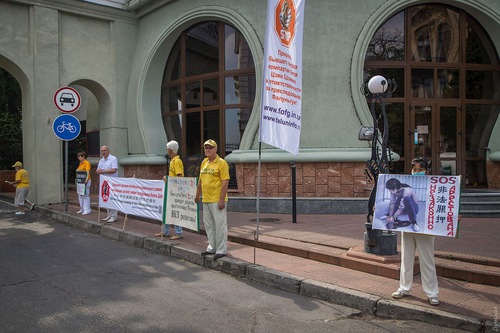 Report by Dumskaya online news about the activity

Practitioners in Kyiv gathered in front of the Chinese Embassy on July 20 to protest the persecution. They took turns due to the limits on gathering sizes due to the pandemic.

After learning about Falun Dafa, a passerby said, “The words on the banner should be bigger so people can learn and remember that communism brings sin to all countries that it touches.”

Another person said he had heard about the CCP’s suppression of minorities in China, so he knew how evil the CCP is. He said the CCP’s persecution of Falun Dafa reminded him of the great famine in the Ukraine cause by the former communist regime there. 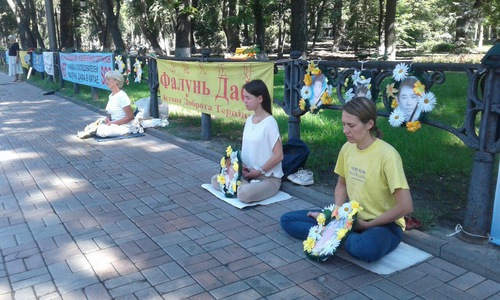 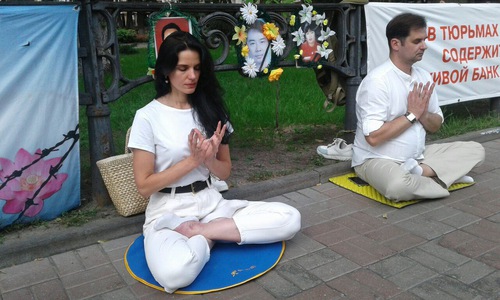 Practitioners in Kyiv peacefully protest the persecution of Falun Gong in China near the Chinese Embassy on July 20, 2020.