Taiwan: Officials at Commemorative Events in Kaohsiung Call for the Persecution to End

(Minghui.org) On July 18, 2020, Falun Gong practitioners from Kaohsiung held rallies and candlelight vigils in Weiwuying Metropolitan Park and Fengshan Xinqiang Park. They mourned fellow practitioners who lost their lives during the 21 years of the persecution of Falun Gong in China and called for the perpetrators to be brought to justice. 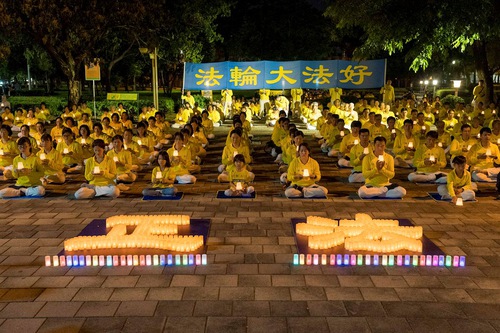 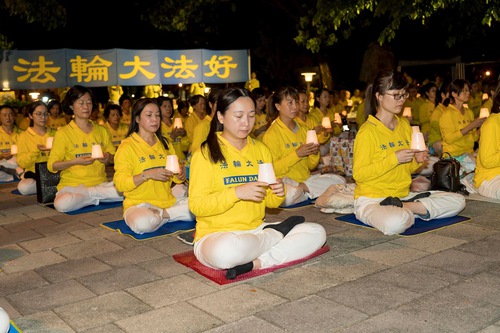 Practitioners demonstrated the exercises, held a photo exhibition, clarified the facts about Falun Gong to passersby, and held a candlelight vigil. Many elected officials attended the events to show their support, and many passersby stopped to learn about Falun Gong and the persecution. 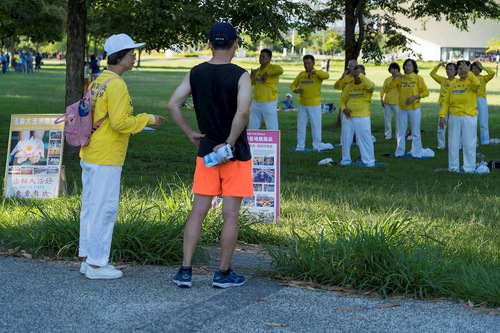 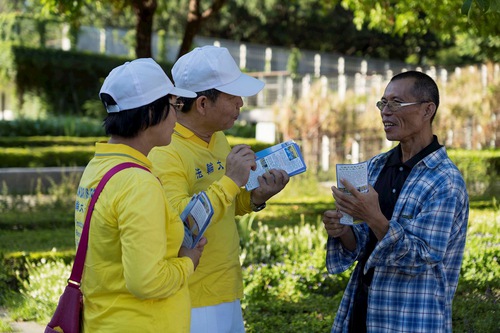 Many people in Metropolitan Park stopped to learn the truth and expressed interest in learning the exercises.

Mr. Chen Yi-chi, President of the Taiwan Foundation Progressive Party, and Dr. Chu Chia-huang, Chairman of the Justice Society of Taiwan, said they support Falun Gong and condemn the persecution.

Legislator: If the CCP Does Not Fall, the World Will Continue to Suffer 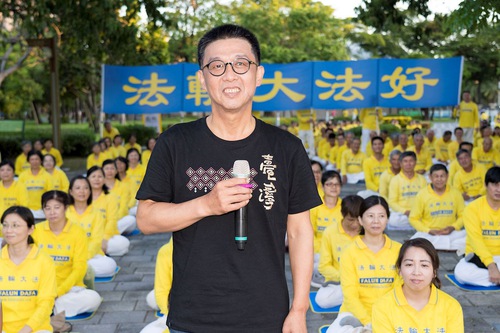 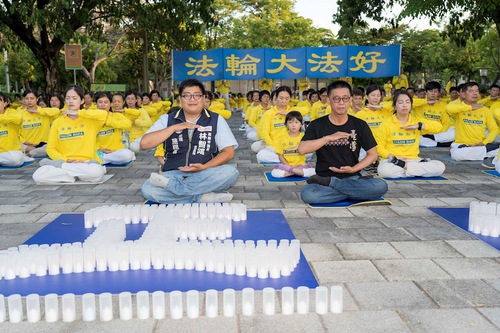 Former Mayor of Fengshan City and multi-term Legislator of the Legislative Yuan Mr. Hsu Chih-chieh and his special assistant join practitioners as they do the fifth exercise.

Former Mayor of Fengshan City and Legislator Mr. Hsu Chih-chieh came to show his support for Falun Gong. He said, “I have been a good friend of Falun Gong for many years. Each time there's an event, I attend to show my support. Falun Gong is very good. It not only helps people get healthy but also elevates people's morals and makes great contributions to society. I appreciate and admire practitioners very much.

“The CCP has committed the most heinous crime in persecuting Falun Gong and even forcibly harvests their organs. Heaven and earth will not tolerate it! I admire the courage of practitioners who, despite the CCP's brutal suppression, stand against the tyranny fearlessly for their freedom of belief.

Hsu Chih-chieh called on people around the world who support democracy and freedom to stand with Falun Gong, condemn the CCP's tyranny, and stop the persecution. He called for punishing the CCP's human rights violators and to disintegrate the CCP so that China can have a better future.

Hsu Chih-chieh said he hopes Falun Gong continues to grow so that more people will learn and practice. He feels Falun Gong should be protected and honored in Taiwan and the rest of the world. Hsu Chih-chieh and his special assistant learned the exercises that day and did the fifth exercise with everyone. 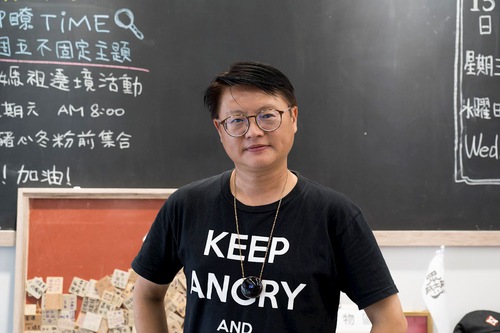 Mr. Chen Yi-chi, Chairman of the Taiwan Foundation Progressive Party, said, “People are gradually awakening and seeing the evil nature of the CCP. The world is getting together to reject the CCP.”

Chen Yi-chi, Chairman of the Taiwan Foundation Progressive Party, is against communism. He was unable to attend the event in person due to schedule conflicts but gave an interview to voice his support of Falun Gong.

Chen Yi-chi, who has a political, labor, and economic background, has worked in Hong Kong and often traveled in and out of China.

Chen Yi-chi said that, before the persecution started, he always saw practitioners doing the exercises in parks in Guangzhou and Dongguan. When the CCP began to persecute Falun Gong in 1999, he was very puzzled. Something so popular, why did Falun Gong suddenly become a thorn in the CCP's side overnight?

He said, “It seemed like the former Party head was using the entire country's power to suppress Falun Gong. The news in China had someone criticizing Falun Gong almost every day. It was just like the Cultural Revolution! The CCP forced family members to expose and criticize one another, tearing families apart. The CCP is really terrible!

“Practitioners are a peaceful group of people. But they need to expose this persecution. They do it very peacefully by doing the sitting meditation and handing out fliers. The inner peace and spirit of Falun Gong have really touched me.

“By telling their personal experiences of being persecuted, practitioners awaken people to see the evil nature of the CCP. I am very touched.”

He pointed out that, through the “Anti-Extradition Bill” movement in Hong Kong and the CCP's frequent intimidation of Taiwan, people have gradually awakened. Chen Yi-chi believes it's time for the world to reject the CCP.

He said emphatically, “Call on the Taiwan government to investigate the CCP's inhumane conduct, stop medical institutions in Taiwan from getting involved in the CCP's vicious organ harvesting, and define criminal responsibilities for this crime.”

Chairman of the Taiwan Justice Association: Falun Gong Is a Force for Social Stability 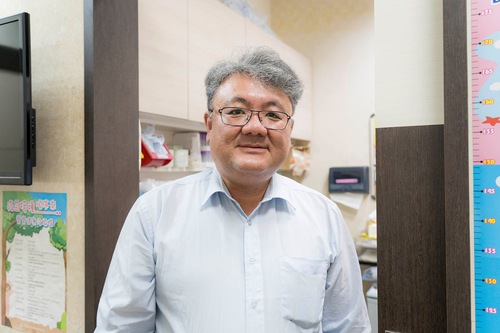 Dr. Chu Chia-huang, a renowned physician in Kaohsiung, says Falun Gong is the most rational, gentle, inclusive, and decent religion he knows of.

Chu Chia-huang, Chairman of the Taiwan Justice Association and a well-known physician in Kaohsiung, had a travel conflict and therefore gave an interview in advance to show his support of Falun Gong. He frequently attends medical conferences in Europe, America, and the Asia-Pacific region, so he often encounters Falun Gong practitioners clarifying the truth at tourist destinations.

He said, “I've observed that Falun Gong is the most rational, gentle, inclusive, and decent religion I know of. Many intellectuals practice Falun Gong and have made great contributions to society. Falun Gong is a force for social stability.

“Practitioners who explain the truth at tourist spots are volunteers. They do it out of the goodness of their hearts—in contrast to the CCP, which is spending huge amounts of money on foreign propaganda and spreading false information,”

Chu Chia-huang said, “The CCP is a totalitarian system and allows no freedom of speech or thought. They can make you disappear, as they’ve done to Falun Gong practitioners, Uyghurs, Tibetan lamas, etc.

“The CCP treats practitioners as commodities and makes huge profits by harvesting their organs anytime, anywhere. The CCP treats people like insects. It is terrible and cruel. In addition, it restricts news from the outside world and fools Chinese people with lies.

“This time, the CCP's virus pandemic and Hong Kong's Anti-Extradition Bill movement have awakened many politicians and people around the world to the true, evil nature of the CCP.”

Chu Chia-huang said, “What practitioners have been saying for years is all true. People are awakening and working together to reject the CCP and eliminate it.

“I look forward to a new China without the CCP! When the darkness of night recedes, dawn comes! Cheers for Falun Gong!”

City Council Member: We Stand Together on the Front Line 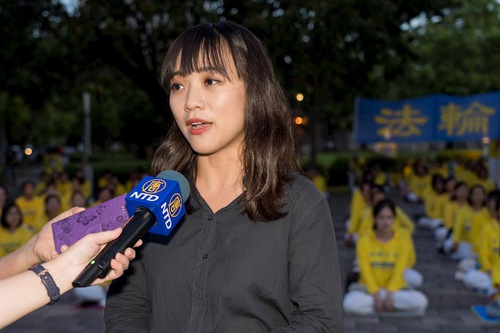 Huang Chie, council member of the New Power Party, attended the event and said that the CCP is an inhumane and cruel regime that not only persecutes Falun Gong, but also Tibetans, Uyghurs, and many religious groups.

Huang Chie said, “Given the CCP's suppression of goodness, I especially wanted to come to support Falun Gong. I noticed that, although practitioners face the CCP's cruel totalitarianism, they have persisted in peaceful and rational appeals. The spirit of Falun Gong is commendable.”

She emphasized, “We stand together on the same front line. We work together for democracy and freedom in this world. Let's do it together!” 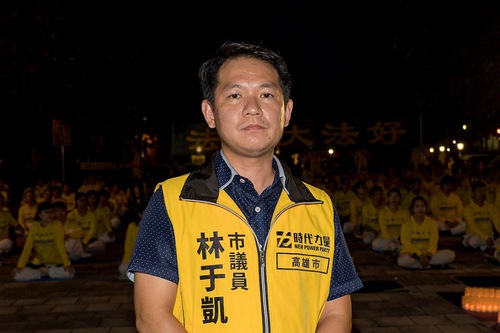 Kaohsiung City Councillor Lin Yu-kai said it was shocking to see how brutal the persecution of Falun Gong has been and how practitioners were tortured to death.

Kaohsiung City Council member Lin Yu-kai said he heard about Falun Gong in college. When he later read that practitioners were being persecuted and tortured to death on the other side of the Taiwan straight, he found it shocking.

The CCP's ideology advocates the concept of violent struggle, which is contrary to Falun Gong's Truthfulness, Compassion, and Forbearance. The CCP has done its best to suppress dissidents, torture and persecute Falun Gong practitioners, and built concentration camps to incarcerate them.

Lin Yu-kai said, “We used to think these incidents happening to Falun Gong practitioners in China were very far away from Taiwan. However, last year, we witnessed how Hong Kong's Anti-Extradition Bill movement led to the passing of the Hong Kong National Security Law. We feel the CCP's evil hands are gradually approaching Taiwan and threatening us.

“Under totalitarian rule, people's freedom of thought is taken away. You would think it is a joke, but it is happening in Hong Kong right now. This is very close to us. Supporting Falun Gong is safeguarding Taiwan's freedom and democracy.”

Borough President: Falun Gong Practitioners Have Contributed a Lot to the Community 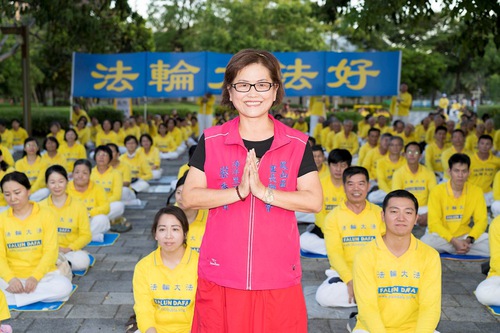 Tsai Hsiu-pao, the president of the Fengshan District Haiyang Borough, attended the event to show her support of Falun Gong. She said, “I support and admire Falun Gong very much. I rode a motorcycle here today, and I was very happy all the way, because I was going to attend a Falun Gong activity, which is very meaningful.”

The community center in the Haiyang Borough offers Falun Gong classes every week. Tsai Hsiu-pao said, “Falun Gong practitioners' selfless efforts and contributions to our community are great. They are a wonderful group. They are kind and gentle. I am especially grateful.”

Special Assistant to Council Member: Only by Stopping the Persecution Can China Get Better 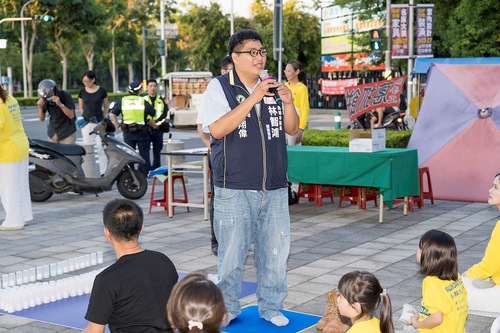 Fengshan City Council member Lin Chih-hung's special assistant Shi Hsiang-wei said at the event, “Falun Gong is a gentle, spiritual group that is welcomed the world over. To uphold their belief, practitioners around the world peacefully resist the persecution. Their upright behavior allows people to clearly see the evil nature of the CCP. Falun Gong's efforts are admirable. Only by condemning and stopping the persecution can China get better."