(Minghui.org) Jin Yingli had endured poor health since she was a child. Her complexion was sallow and she was very thin. She had little energy and could only sit quietly as her classmates dashed outside to play.

“My friends always asked me to play on the swing or skipping rope, but it made me unwell. Whenever I went on school excursions or holiday trips, I would catch a cold or develop a fever,” she said. She seldom experienced running around jubilantly like other children. She felt life was transient, as if every wonderful moment would disappear in a second. She did not know what to do with her life.

Jin chose to work in the travel industry after she graduated. “All my friends said this was a great irony because I could not spend even one night away from home. I worked hard every day. When I got home at the end of the day, I was spent and could only lie in bed. I got through every day due to sheer determination. During holidays, I didn’t want to go anywhere.

“The travel industry was booming then and I was well paid. However all the money I earned could not change my health. I was unhappy and wondered why my life was so miserable. Others pursued wealth and a successful career, but I didn’t want any of those things. All I wanted was to be healthy and live a normal life.”

Searching for an answer, Jin became a vegetarian, tried yoga and attended Buddhist classes. She still felt lost. When she turned 42, while accompanying her father to the doctor, she saw a yellow book on the shelf and was drawn to it. The doctor told her, “This is an excellent book.” The book was the main teachings of Falun Dafa, Zhuan Falun.

“I always complained about my poor health. After reading Zhuan Falun, I understood that misfortune or success in life is the result of karma and virtue accrued in past lives. The book answered all my questions,” she said. 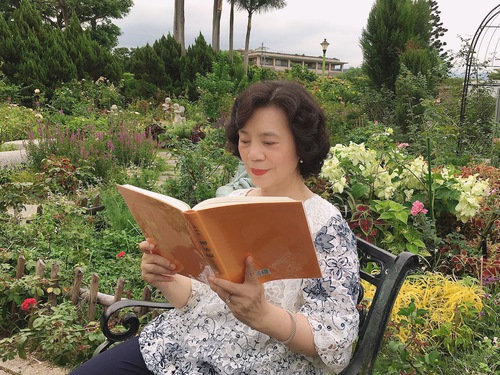 Jin Yingli found all the answers she had about life in Zhuan Falun.

A heavy burden was lifted off her shoulders soon after she began to practice Falun Dafa. “I used to get dizzy whenever I looked up. When I was a student, I tried all kinds of iron supplements and health products, but nothing helped. As an adult I often felt weak and was grateful just to be able to take in a breath of air. I felt wonderful after I began practicing. My body felt very light and my nearsightedness disappeared. I could also breathe in as much air as I wanted. I didn’t feel tired no matter how far I walked, and my mind became much clearer.”

Within six months after she began practicing, Jin felt renewed. Her outlook on life and the world changed completely. She stopped complaining about how unfair her life was. She became calm, optimistic and generous. The teachings of Falun Dafa taught her to be kind to others and it fundamentally changed the way she handled problems. She said, “In the past, I would be upset when I was treated unfairly at work, but Dafa taught me to forgive others during conflicts.”

She gave an example, “Once my co-worker told me that he had a group of travelers stuck in Hong Kong due to the weather. Everyone in the office had gone home. I chose to stay and help him handle the Hong Kong visas, accommodation, food and air transit arrangements. I told him he could tell the boss that he resolved everything himself and he didn’t have to share his bonus with me. Many years later after he left the company, he told me he is still very grateful for what I did. He said that through my actions, he knows Falun Dafa is good.”

As a business manager Jin needs to deal with customers directly. She said, “Sometimes, problems suddenly crop up. Some customers cancel their overseas trips at the last minute. They think they don’t have to pay for anything, including the administration fees we paid upfront on their behalf. I used to get very upset with them. But after I became a practitioner, I would think perhaps he has a reason for canceling the trip and absorb the costs. At the same time I ask myself if I'm attached to monetary gain and that’s why I ran into this situation. Amazingly, such incidents never occurred again after I let go of my attachment.”

When things happen unexpectedly, they test Jin’s character. She said, “One time a customer was supposed to catch a plane at 2 but he arrived at 1:50. I asked why he was so late. He said but there’s 10 more minutes. I thought it was inconceivable at first. Then I remembered the teachings of Dafa. I should see if there is anything I could improve on. I realized I was wrong. Some people haven't traveled before. I should have told him he needed to get to the airport early so that he could check in.

“Another time, the airport informed me that two guests had checked in their baggage but hadn't boarded the plane, and it was time to take off. I couldn’t contact them, as their phones were switched off. The airline company said they couldn’t wait any longer. I told them to close the gates. Later, I found the passengers in the duty free shop. They had lost track of time. I did not berate them. Instead, I saw where I was lacking. I relaxed after helping them check in. I did not stay in contact with them afterwards and consequently they missed their flight.”

Jin summed up her thoughts after going through countless tests in over 30 years of work experience. “Although many things happen suddenly and need to be handled urgently, I learned not to have any negative thoughts, to calm down and deal with the situation appropriately.”

A Taiwanese businessman came to see me after he returned from China. He said, “You are very well known. The president of the business association in Shanghai knows your name. He warned me not to do business with you because you practice Falun Dafa. I told him you have provided excellent service for over two decades. Besides, Taiwan is a democratic country. You do not bother anyone by practicing Falun Dafa. Why shouldn’t you practice it?”

Jin said, “Another customer from China has kept in touch with me for many years. He told me that he sees practitioners everywhere in Paris and New York. He said Falun Dafa must be good, or else why would people all over the world practice it?”

Jin often used to attend parades in Hong Kong in her spare time to share the beauty of Falun Dafa and expose the CCP’s brutal persecution. “One year, I participated in a parade on July 1. It was very hot and the parade was a long one. I was worried that I wouldn't be able to walk all the way to the end. I looked up and unexpectedly saw every cloud in the sky had turned into lotus flowers. I was encouraged and my fatigue went away,” she said.

“I often meet people from Hong Kong at tourist attractions in Taiwan. A young man was very touched to see that practitioners had persevered for over two decades. He said, 'Thank you for continuing your parades in Hong Kong all these years. In the beginning I thought this persecution had nothing to do with people in Hong Kong. We later realized how brutal the Communist regime is. Practitioners risk their lives by going to the front lines.'”

Jin says that Falun Dafa helped her find hope in life and spared her from life’s struggles. “Initially, I thought my body would never get better. A book brought me a life changing miracle. I hope that everyone can find their purpose in life and true happiness by practicing Falun Dafa,” she said.