(Minghui.org) Falun Gong practitioners from Taichung, Taiwan held a candlelight vigil at Wenxin Forest Park on the evening of July 18, 2020.

Twenty years ago, on July 20, 1999, former Chinese Communist Party (CCP) leader Jiang Zemin launched the persecution of Falun Gong, a peaceful meditation and spiritual practice. The CCP’s violent campaign continues today, and thousands of practitioners are confirmed to have died as a result. 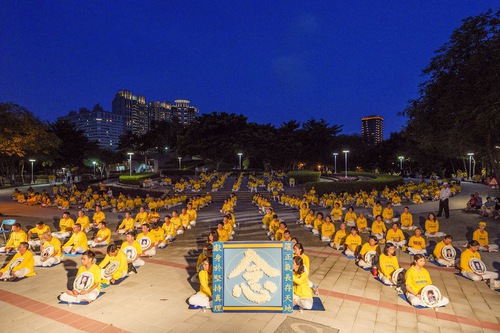 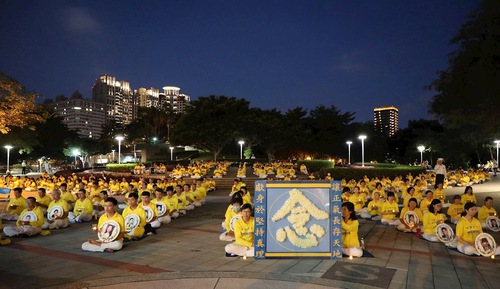 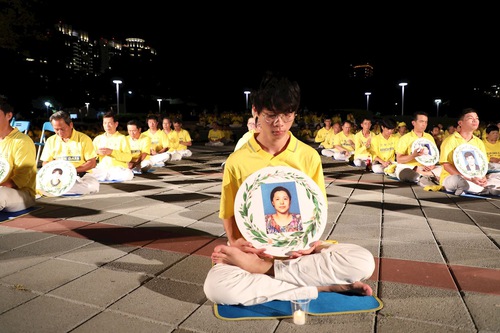 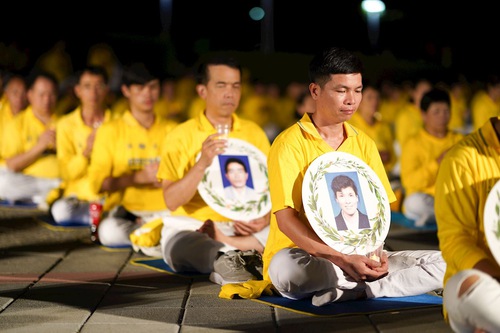 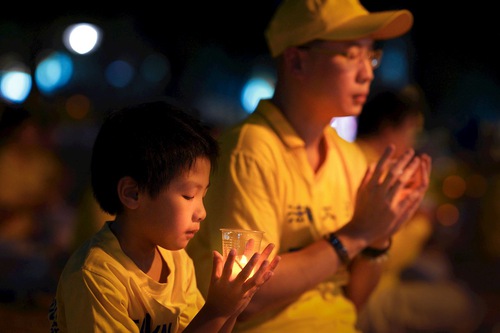 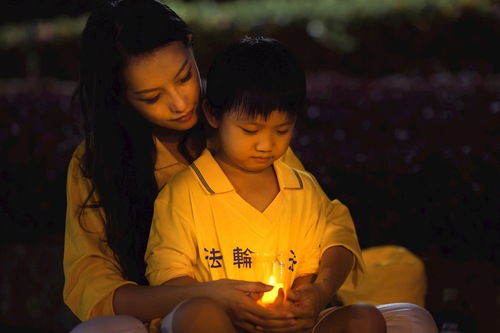 Practitioners from the Taichung area hold a candlelight vigil at Wenxin Forest Park in the Taichung District on July 18, 2020.

Taichung City legislator Changliao Wan-Chien, City Councilor Lee Tien-sheng, Chief Strategy Officer of Huawang Global Limited Co,. Dr. Lisa, and President of the Distinguished Citizens Society of R.O.C Chen Fengren came to show their support. They appealed to the international community to act immediately to stop the CCP's brutality and tyranny. They also commended Falun Gong practitioners for their perseverance and courage through the past 21 years of resisting the persecution.

Taichung Legislator Changliao Wan-Chien: The More One Deals with the CCP, the More Harm One Brings to Oneself 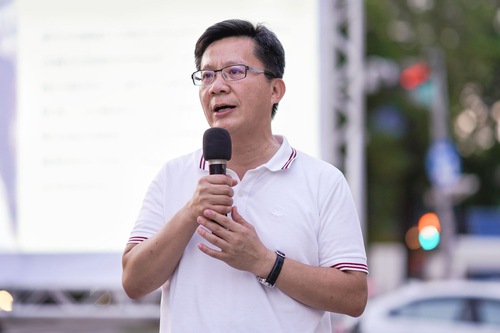 Legislator Changliao Wan-Chien has always supported practitioners' efforts to expose the persecution. He said more people now see clearly that the CCP's only interest is its own political interest. He cautioned people to be clearheaded when dealing with the CCP, as the longer one works with it, the more one harms oneself.

He said the CCP undermines human rights, religious freedom and democratic values. “Taiwanese people know this,” he said. “Some remain silent because they do business with China. Those who have been lured in by the CCP should remember that it wants to be the sole winner.”

Referring to the anti-extradition movement in Hong Kong last year, hesaid, “Though the CCP claimed [it would] maintain democracy in Hong Kong for 50 years, now one can’t even hold an anti-CCP flag in Hong Kong. The CCP is a anti-democratic regime. People should remember that.”

He mentioned that when he visited Poland and other Eastern European countries last year, local officials told him that they were very clear that the CCP’s diplomacy completely serves the Party’s interests and has no respect for human rights. They said the CCP tried to use the “One Belt, One Road” initiative to lure them in, and it even tried to manipulate local political parties. The CCP’s goal is to tarnish democracy, freedom and human rights to protect its ambitions and interests, they said.

Changliao Wan-Chien said that when the CCP began to persecute Falun Gong in 1999, he observed the steadfast efforts of practitioners in the U.S. and Europe. He noted that they have tirelessly exposed the Party's brutality and upheld their belief despite the relentless persecution. 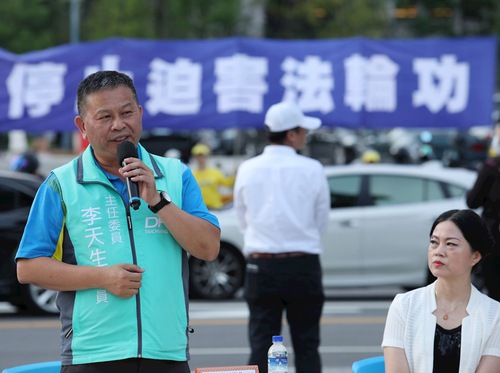 City councilor Li Tien-sheng said he regularly attends practitioners' events to show his support and that he admires practitioners' courage and tenacity in upholding the principles of Truthfulness-Compassion-Forbearance for so long.

He said the entire world has witnessed the CCP's persecution of Falun Gong. He also contrasted the degree of freedom in China and Taiwan and said he anticipates the CCP will soon collapse.

Dr. Lisa: Falun Gong Should Not Be Persecuted 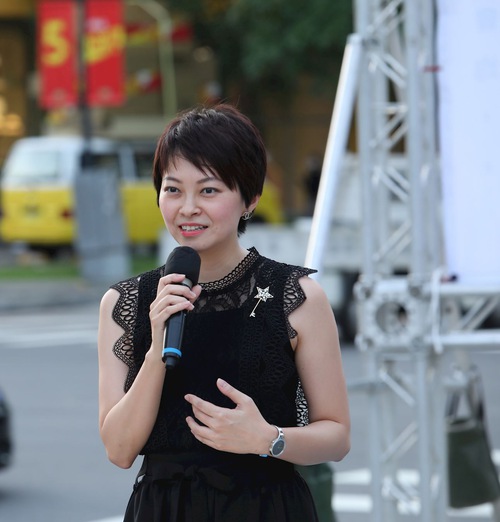 Dr. Lisa, Chief Strategy Officer of Huawang Global Limited Co., said that with the pandemic and the new National Security Law in Hong Kong, many people feel depressed, adding, “If all of us would be kind and willing to do things for others, the world would be better.” She said she feels the peacefulness and kindness of Falun Gong practitioners. She called on people to help end the persecution to make the world a better and safer place.

Chen Fengren, President of the Distinguished Citizens Society of R.O.C., Thanks Falun Gong Practitioners for Their Unprecedented Courage 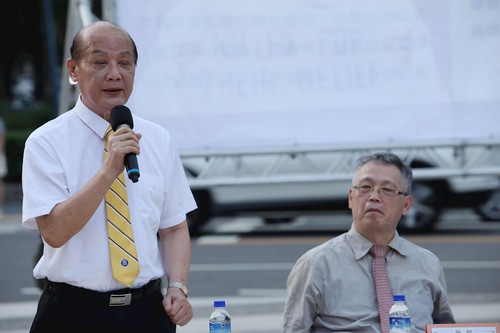 President of the Distinguished Citizens Society of R.O.C Chen Fengren delivers a speech

Chen Fengren, President of the Distinguished Citizens Society of R.O.C., said some of his friends had their health issues resolved after they began practicing Falun Gong. He often visits his friends in New York, who told him how severe the persecution in China was. Throughout the years, he always saw Falun Gong practitioners near the Taiwan 101 Building and other tourist spots. He said he truly admires their persistence and advised Chinese people to be careful of the CCP.

President of the Medical Federation: The CCP Has No Ethics 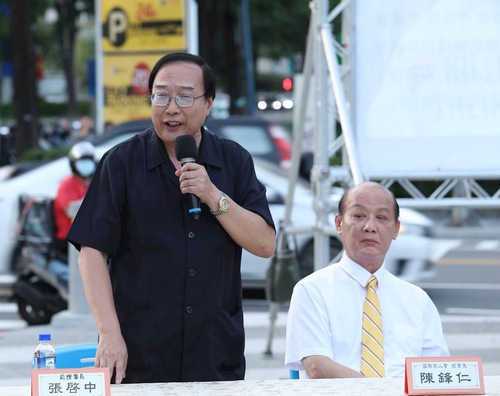 Dr. Chang Chi-Chung, former President of the Taichung Medical Association and Associate Professor of Sun Yat-sen University said, “Three years ago I invited medical doctor An Hua from the Xinjiang Autonomous Region to Taiwan. During the medical ethics class, An talked about how he was cheated into participating in live organ harvesting. Out of fear, he didn’t want to go back to China. His experience alarmed the students.”

Dr. Chang said that a universal ethics and moral standard is practiced worldwide, yet it doesn’t exist in China. Two years ago, he went to Hong Kong but was denied entry. He felt it was because he had criticized the CCP. He said people should not place false hope in the CCP. 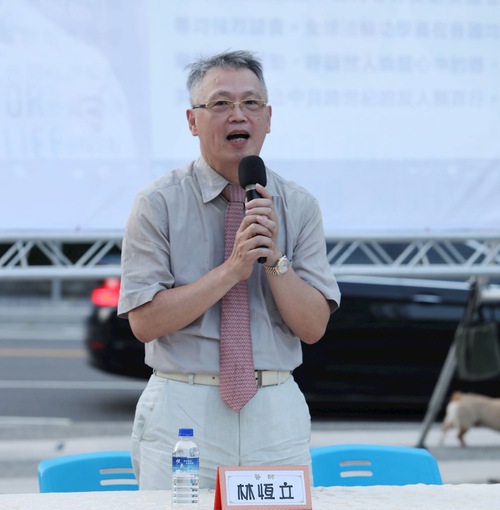 Dr. Lin Hengli, a representative from the medical field, recalled a case of organ tourism to China. “There's usually a long wait time for an organ. But in China, an agency can find one easily, so several Taiwanese patients went to China to have organ transplants,” he said.

He initially thought these organs came from prisoners who had been sentenced to death, but he later learned the main source of these organs were Falun Gong practitioners. He said that if doctors questioned the source of the organs, they should not perform the transplant surgery.

He condemned the CCP’s forced organ harvesting and supported practitioners' efforts to speak out on this issue. He aso encouraged doctors step forward to stop this evil act.

Professor: We Will Witness the CCP’s Collapse 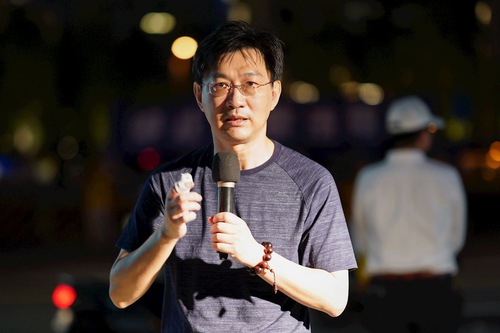 Tung Chien-Hung, associate professor at Chung Hsing University, said, “In the past, few Taiwanese saw the true nature of the CCP. Now more and more people realize that when the CCP's feels its power is being challenged, it responds the way a totalitarian regime would. It’s become increasingly fearful of losing control over people, so it has become more strict.”

“If the CCP doesn’t collapse, more people will be harmed. China is experiencing unprecedented calamities. The Three Gorges Dam is not just a natural disaster waiting to happen. Building it was human error. The damage this dam has caused to the ecosystem has resulted in tens of millions of Chinese people being victimized by calamities. If China were a democratic country, then experts with a conscience would have advised against building it, but a totalitarian regime has no consideration for the consequences of its actions.”

“We appreciate Falun Gong practitioners. In order to uphold their belief in Truthfulness-Compassion-Forbearance, they have been subjected to cruel persecution and suppression in China, which governments around the world have condemned. The truth will prevail, and we will witness the collapse of the CCP.” 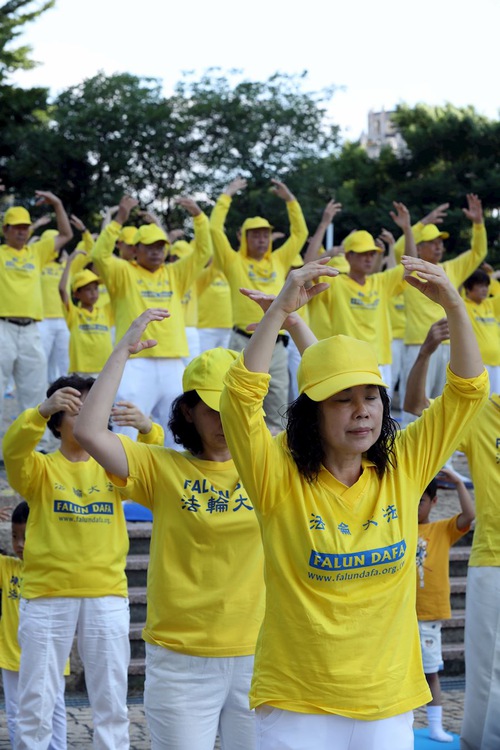 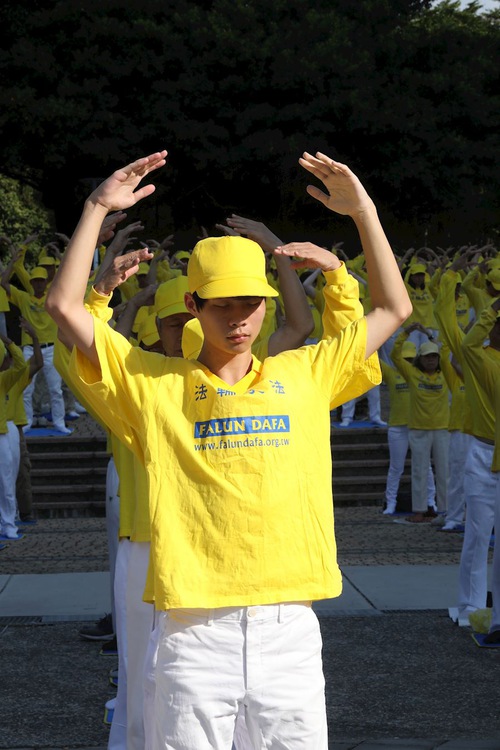 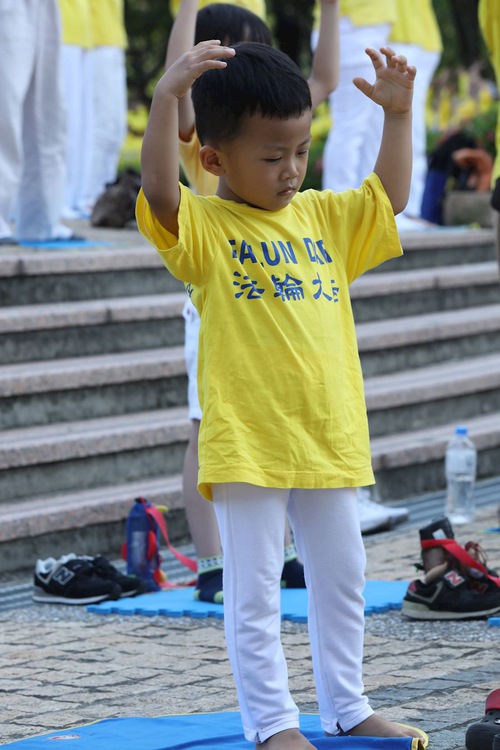 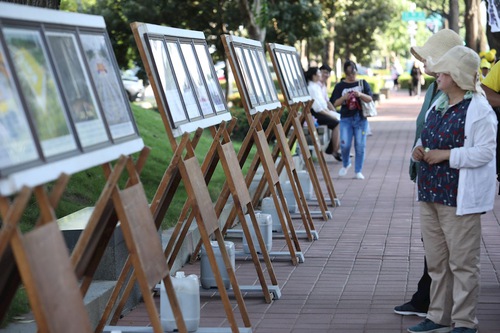 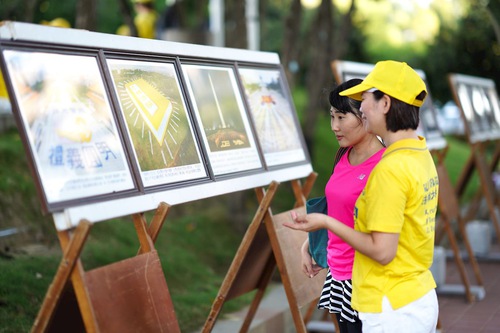 Taichung practitioners demonstrate the Falun Dafa exercises and display information about the persecution in China.

Taichung practitioners gathered in the afternoon to demonstrate the Falun Dafa exercises and display information to raise awareness of the persecution in China and collect signatures to condemn the persecution.

A man surnamed Li from Dali District in Taichung came to support the event. He said the CCP brings only poverty, famine, tyranny and totalitarianism wherever it goes. He was also appalled to learn of the regime’s forced organ harvesting and said it should be stopped immediately.

“USA: 28 Members of Congress Write to Support Falun Gong and Condemn the Persecution”