(Minghui.org) The coronavirus outbreak that started several months ago has caused over 10 million infections globally, with more than half a million deaths as of late June 2020. As many countries seek to hold the Chinese Communist Party (CCP) responsible for covering up and mishandling the outbreak, the United States—which has more than 2.6 million cases, has taken the lead in recognizing missteps in the past few decades that fostered the CCP’s growth and expansion.

Robert C. O’Brien, the United States National Security Advisor, spoke at Phoenix, Arizona, on June 24 regarding American policies towards the Chinese Communist Party. He reviewed lessons learned for the U.S. government in the past and listed a number of areas that will be the focus of U.S. policy towards the CCP.

In particular, O’Brien talked about religious persecution in China. Because of manipulation from the CCP, many international organizations such as the U.N. Human Rights Council or WHO have failed to rein in the CCP’s damage to its citizens and people around the world.

O’Brien's talk is one of a series of speeches to be delivered by top U.S. officials. Vice President Mike Pence, Secretary of State Mike Pompeo, Attorney General Barr, and FBI Director Chris Wray have also scheduled speeches in the next few weeks that will highlight U.S. policies towards China. 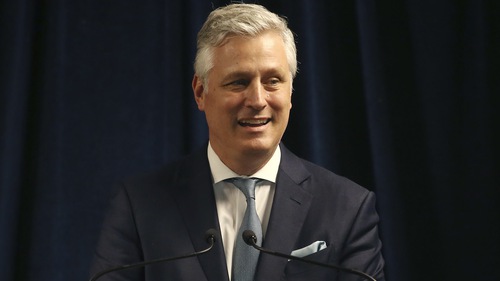 Wishful Thinking about the CCP

O’Brien started his talk with a review of U.S. policy about China in the past few decades. “For decades, conventional wisdom in both U.S. political parties, the business community, academia, and media, has held that it was only a matter of time before China would become more liberal, first economically and, then, politically,” he said, “The more we opened our markets to China, the thinking went, the more we invested capital in China, the more we trained PRC bureaucrats, scientists, engineers, and even military officers, the more China would become like us.”

With that mindset, the U.S. helped China enter the WTO in 2001 along with other privileges. The U.S. officials also downplayed China’s gross human rights abuses, including Tiananmen Square. Technology theft by the CCP was also largely ignored.

“We could not have been more wrong—and this miscalculation is the greatest failure of American foreign policy since the 1930s. How did we make such a mistake?” O’Brien reflected, “The answer is simple: because we did not pay heed to the CCP’s ideology. Instead of listening to what CCP leaders were saying and reading what they wrote in their key documents, we closed our ears and our eyes. We believed what we wanted to believe—that the Party members were communist in name only.”

In reality, the Chinese communist regime has remained essentially the same. Citing phrases from Australian government official John Garnaut, O’Brien said the history of Soviet Union and China have proven that communism is a totalitarian ideology. “Under communism, individuals are merely a means to be used toward the achievement of the ends of the collective nation state,” he explained. Although abandoned 30 years ago “as the most costly failed political experiment in history,” the communism doctrines nonetheless “remain as fundamental to the Chinese Communist Party as the Constitution and the Bill of Rights do to us as Americans,” he added.

Nature of the CCP

As pointed out by Garnaut, the CCP achieves control through two sets of tools—one is “weapons and violence,” and the other is “language and culture.” “Chinese leaders have always believed that power derives from controlling both the physical battlefield and the cultural domain,” quoting words from Garnaut, he explained, “Words are not vehicles of reason and persuasion. They are bullets. Words are for defining, isolating, and destroying opponents.”

O’Brien pointed out that “propaganda plays a central political role for the CCP.” Chinese citizens are forced to study “Xi Jinping Thought,” and foreign newspapers and social media (such as Facebook, Twitter) are banned, with “all content generated within China” being banned. “Just recently, between January 1 and April 4 of this year, nearly 500 individuals were charged with crimes just for speaking out about the Wuhan coronavirus, its effects upon the Party, and the Party’s cover-up of the disease,” he added.

The CCP also tightly controls religious beliefs, by suppressing and reinterpreting religious texts to conform to communist party ideology. Violators are subject to detention, forced labor, and other types of mistreatment. The CCP has invested billions of dollars into overseas propaganda, by controlling or influencing almost every Chinese language news outlet.

In addition to expelling foreign reporters, the CCP has also been abusing foreign social media for its own propaganda. Recently Twitter suspended more than 23,000 CCP-linked accounts, but there could be more accounts that are undetected. Such influence of the CCP has extended to American college campuses, businesses, and Hollywood.

The CCP has also hacked American organizations in both the private and public sectors, such as Anthem insurance, the Office of Personnel Management, and Equifax, stealing confidential and sensitive data.

Actions Against the CCP

O’Brien listed six major actions that the U.S. is taking to counter the CCP's influence.

First, the current U.S. government has “prevented certain companies that answer to the CCP’s intelligence and security apparatus—such as Chinese telecommunications giant Huawei—from accessing our personal and private data.” He added that, “The Administration also imposed restrictions on U.S. semiconductor technology from going to Huawei.”

Second, the state department has designated “the U.S. operations of 9 Chinese state-controlled propaganda outlets as foreign missions” because they “are the mouthpieces” of the CCP and will now face reporting requirements and visa restrictions.

Third, export restrictions are now imposed on “21 Chinese government entities and 16 Chinese companies complicit in China’s campaign of repression, mass arbitrary detention, forced labor and high-technology surveillance against Uyghurs and other minorities,” and travel restrictions are now placed on “officials complicit in these abuses from traveling to the United States.”

Fourth, the U.S. has left the U.N. Human Rights Council and the WHO to protest their close ties to the CCP.

Fifth, the U.S. government is limiting “the People’s Liberation Army's ability to use student visa programs to place its officers and employees in our colleges and universities to steal U.S. technology, intellectual property, and information.”

O’Brien summed up the six major actions, “Now, these steps are just the start as America corrects 40 years of a one-sided, unfair relationship with China that has severely affected our nation’s economic and, recently, political well-being. Just like the tariffs that were imposed by the President on unfair trade practices early in his Administration, there is more to come.”

In the end, he said the U.S. government will uphold its core values such as the freedom of speech, and he also differentiated the CCP from Chinese people. “The United States has a long history of friendship with the Chinese nation. But the Chinese Communist Party does not equal China or her people.”

“Visiting Relatives and Friends to Clarify the Truth”