(Minghui.org) Located between the Parliament of Sweden and the Royal Palace, Mynttorget is the one of most popular areas in Sweden’s capital, Stockholm. For the past decade, Falun Dafa practitioners have held activities at Mynttorget to introduce the ancient spiritual practice to the public and raise awareness of the persecution of Falun Dafa in China.

On the sunny afternoon of July 7, 2020, practitioners demonstrated the Falun Dafa exercises at Mynttorget and talked to people about the practice. Many people stopped to watch the exercises and take photos. A steady stream of people stopped and read the information boards about Falun Dafa and the persecution in China. Some were interested in learning the practice, and many people signed the petition to call for the end of the persecution. 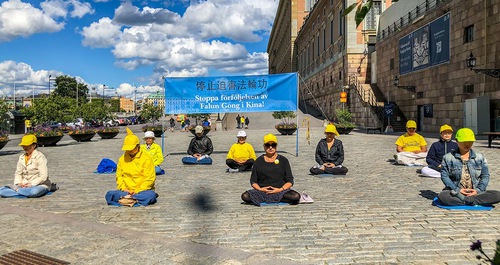 Practitioners in Stockholm held activities at Mynttorget on the afternoon of July 7, 2020. 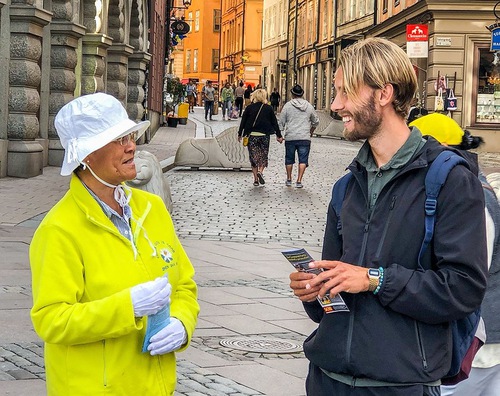 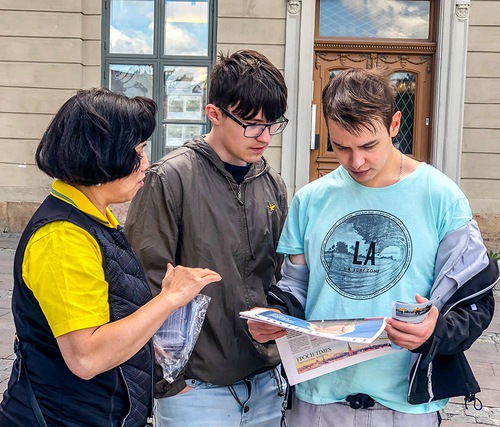 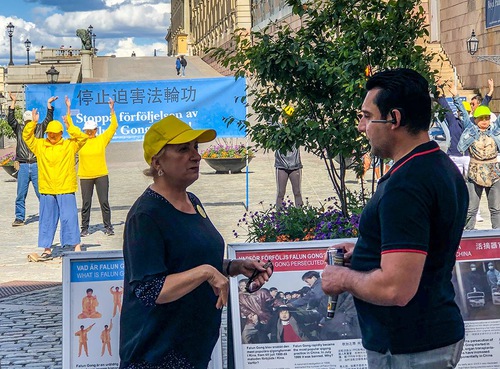 Practitioners introduce Falun Dafa and talk to people about the persecution. 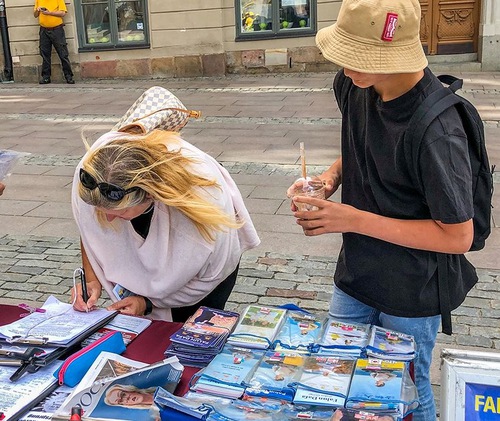 A passer-by took a brochure from a practitioner and began reading it. After learning about Falun Dafa, he immediately signed the petition. He told a practitioner that he was very interested in the ancient traditional culture of cultivation from the east. He loved the words, Truthfulness-Compassion-Forbearance, and thought they were great. He said he believes in the existence of divine beings and he feels that it is especially important for a person to have a spiritual belief in this modern society. He said that he would go to the Falun Dafa website to read Falun Dafa books and learn more. He wished to learn and practice Falun Dafa and asked several questions about the hours and location of the practice site in Stockholm.

Many young people stopped by to learn about Falun Dafa. Two Swedish women in their twenties attentively read the information boards and then talked to practitioners for a long time. They were indignant that the Chinese Communist Party (CCP) persecutes practitioners and kills them for their organs. They went to the table and signed the petition. 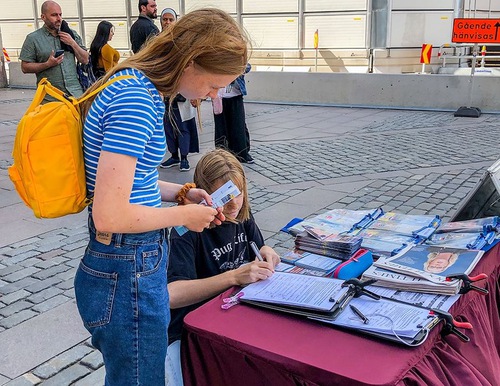 Two young women sign the petition to end the persecution.

Two students said they were very happy to see Falun Dafa practitioners raising awareness about the persecution. They were from Hong Kong, studying in Sweden. They signed the petition and said that they knew very well how the CCP persecutes Falun Dafa and kills practitioners for their organs.

They also told practitioners that the CCP is harming the Hong Kong people and has ruined their beautiful city. They feel that they cannot go back to Hong Kong since it's now controlled by the CCP, and they no longer have human rights or personal freedom in a CCP-controlled Hong Kong. They hoped that practitioners would persevere in clarifying the truth and help the whole world see the CCP’s evil nature.

A well-dressed older Swedish woman talked with practitioners. She said that she already knew about Falun Dafa and every time she sees practitioners’ activities, she enjoys watching them. With tears in her eyes, she said, “I really sympathize you. For so many years you have suffered so much, but you are still so peaceful and kind. Falun Dafa is so wonderful!” She kept wiping away her tears as she continued to watch practitioners doing the exercises.

A middle-aged man who works in the Swedish Parliament was pleased to see the practitioners. He smiled as he watched them doing the exercises and talk to people about Falun Dafa. Before he left, he gave practitioners a thumb up and shouted, “You're great!”

“My Aunt Can See Again”