(Minghui.org) Falun Dafa (also known as Falun Gong) practitioners from the greater Vancouver region gathered in front of the Chinese Consulate in Vancouver on July 10, 2020, in a peaceful protest to highlight the persecution of their faith in China, which will soon enter its 21st year. They held a candlelight vigil to commemorate those who were tortured to death for refusing to renounce Falun Dafa. 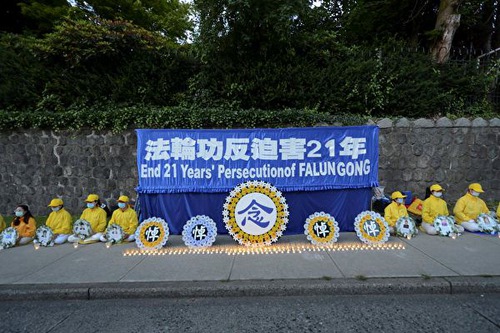 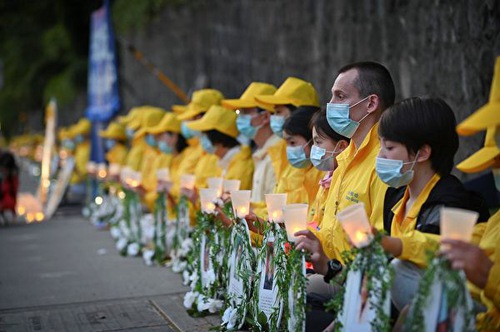 Falun Dafa practitioners formed two rows over 100 meters long on both sides of the entrance to the Chinese Consulate. They held signs in English and Chinese, calling on people to help stop the Chinese communist regime’s brutal persecution of practitioners in China. 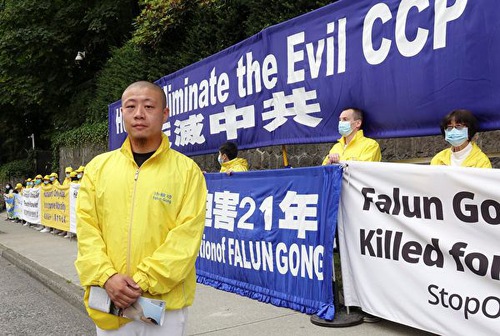 Liu Dawei came to Canada to study in 2003. After several years, he began to understand what Falun Dafa is and recognize the defamatory propaganda spread by the CCP (Chinese Communist Party). He decided to begin practicing Falun Dafa.

He told his family about his experiences with Falun Dafa during a trip back to China with his wife and children. His 80-year-old grandmother, who had chanted Buddhist scriptures for many years, switched to practicing Falun Dafa after Dawei introduced it to her. She said Zhuan Falun, the main book of Falun Dafa's teachings, is the treasure she'd been searching for all her life.

Dawei’s mother used to be in poor health. After she took up Falun Dafa, her health issues were resolved. She felt lighter after doing the standing exercises. Now she has a good appetite and sleeps better. She also became more kind and considerate to others by following the principles of Dafa and got along better with her family.

Dawei also told his friends about the benefits of Dafa. A friend in Shanghai was planning to undergo surgery. After talking to Dawei, he started practicing Dafa and quickly regained his health. A friend in Hong Kong whose family was Buddhist was moved after seeing the changes in Dawei, and he decided to start practicing Dafa himself.

“Falun Dafa is awakening the conscience of the Chinese people,” said Dawei. 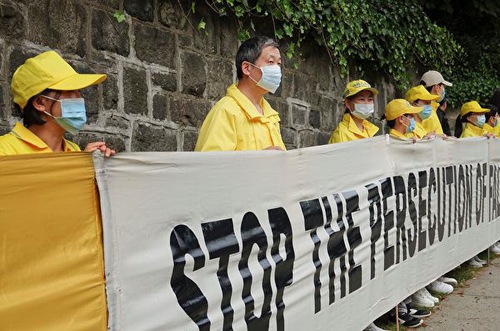 Sun Luyi and his family moved to Canada many years ago. In 2011, he began reading about Falun Dafa on the Chinese Epoch Times website. He said he wanted to live by Falun Dafa's guiding principles, Truthfulness-Compassion-Forbearance, and become a more selfless person. He decided to start practicing Dafa.

Mr. Sun was hospitalized three times in the past due to his heavy workload as a shop manager. His health improved after he began practicing, and he has not needed a single pill for nine years. After witnessing his positive changes, his wife, daughter, and mother-in-law also decided to begin practicing. His family relationships became harmonious, and his 70-year-old mother-in-law is now full of energy.

After Mr. Sun told his friends and relatives the amazing benefits of Dafa, his two older sisters, father-in-law, and relatives realized they had been deceived by the CCP’s anti-Falun Dafa propaganda and quit the communist organizations they had joined.

Fortunate to Have Found Dafa 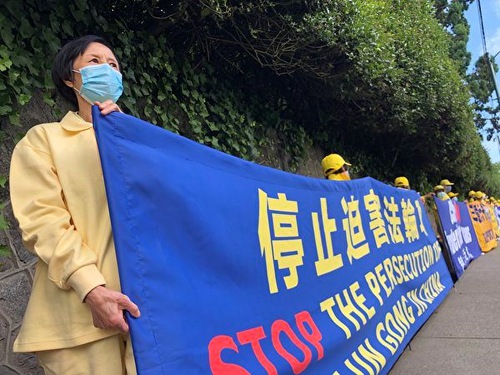 Zheng Aishu is Korean and lived in Northeastern China. Someone gave her a copy of the Nine Commentaries on the Communist Party at a night market in Vancouver in 2005. She was so shocked to learn the facts about the CCP that she couldn't stop thinking about it. She later talked with Falun Dafa practitioners at an information booth in Chinatown and borrowed a copy of Zhuan Falun to read.

Ms. Zheng explained, “I did not practice Falun Dafa to improve my health. I felt that the teachings were wonderful. The book answered all the questions I had about life. I began to practice in 2007. Although it was a bit late, I feel extremely fortunate to be able to practice this freely outside China.”

She actively participates in events to raise awareness of the persecution, whether it is outside the Chinese consulate or at tourist attractions in Vancouver. She also joined the practitioners’ waist drum team and performs in community parades.

Persecuted For Refusing to Give Up Falun Dafa 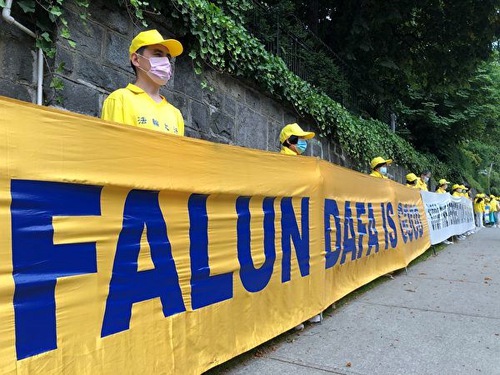 Yue Zhongsheng was a foreign language lecturer at China’s Civil Aviation University and was well respected by friends and family. He was arrested three times and imprisoned in forced labor camps twice for refusing to give up practicing Falun Dafa and talking to people about the persecution.

His first arrest was in early 2005, when he played a video about Falun Dafa to final-year students and was reported to the school. The police arrested and detained him at the Tianjin Detention Center. Mr. Sun, head of the Dongli District branch police station, threatened to destroy him and his family if he did not reveal where he got the videotape about Falun Gong.

Mr. Yue was frequently beaten by four or five prisoners for refusing to give up Falun Dafa. The abuse happened while he was imprisoned at the Shuangkou Labor Camp in Tianjin. One of them repeatedly beat him with a stool. He would be in such pain from the beatings that he could not sleep or even turn over. After he was released, a medical exam revealed that nine of his ribs were broken as a result of the beatings.

The university fired him while he was imprisoned. He was not given any compensation.

Mr. Yue said, “Throughout Chinese history, heroes sacrificed a lot, including their lives, for justice. I cannot give up my belief and conscience for personal gain.”

He said he firmly believes that the world needs Truthfulness-Compassion-Forbearance and that, in the end, these principles will triumph over evil.