(Minghui.org) Twenty-one years ago, former Chinese leader Jiang Zemin launched the persecution of Falun Gong. Also known as Falun Dafa, the peaceful meditation practice follows the principles of Truthfulness, Compassion, and Forbearance. Since July 20, 1999, the Chinese Communist Party (CCP) has arrested tens of thousands of practitioners, tortured those who refused to renounce their faith, and killed countless others by removing their organs for transplant while they were still alive. 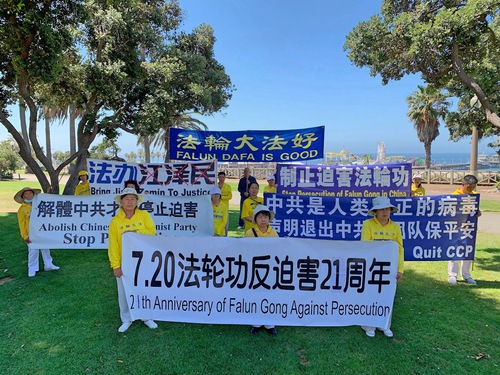 Falun Gong practitioners gather at Santa Monica Pier on July 12, 2020, to raise awareness of the ongoing persecution of the peaceful practice in China.

Practitioner Ms. Helen Li said that practitioners around the world responded to the onset of the persecution with compassion. Their peaceful response during the past 21 years allowed many people, especially those who were deceived by the CCP’s propaganda against Falun Gong, to have a positive view of the practice and see how wrong the persecution is.

She said, “The CCP put up an internet firewall so people inside China wouldn’t know what's going on outside of China. The Chinese people still long to know the truth. Once they did, they had great things to say about practitioners and their tireless efforts to end the persecution.”

When the CCP covered up the spread of the coronavirus and enacted the security law in Hong Kong, the world’s people began to see the toxic nature of the regime. They are coming to realize that what the practitioners have been saying about the CCP for the past two decades is the truth. 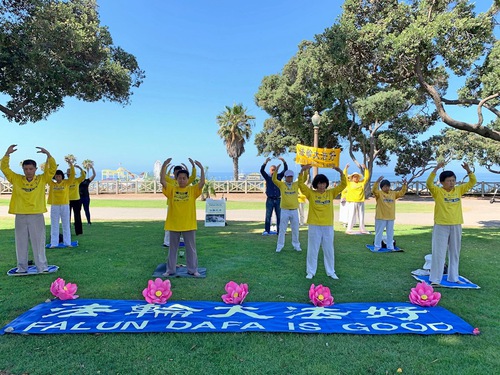 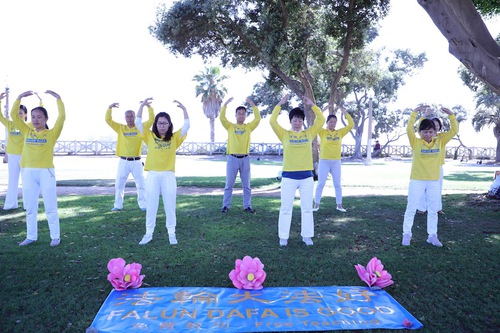 Practitioners from L.A. demonstrate the Falun Gong exercises at Santa Monica Pier and tell people about the persecution. 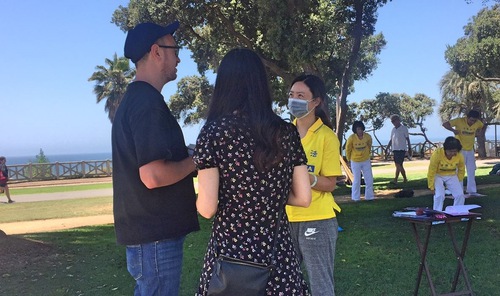 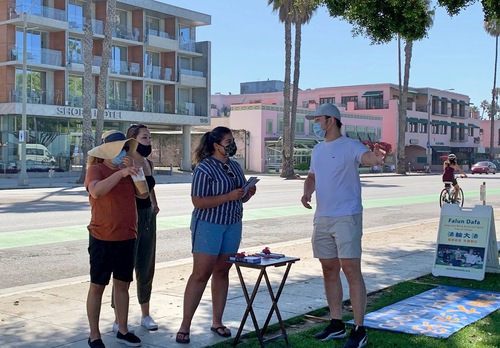 Passersby learn about the health benefits of the practice and why the persecution is wrong.

Two young women stopped to watch practitioners do the exercises, and wanted to learn more about the practice. One practitioner, who was tortured in a prison in China for four and a half years before she came to the U.S., told them how she was tortured. When the two learned that the CCP systemically harvests organs from tens of thousands of practitioners imprisoned for their faith while they were still alive, they were astonished. They asked almost simultaneously, “What can we do to help?” The practitioner suggested that they tell their families and friends about the persecution so that more people will take a stand and say, “No to the CCP.” 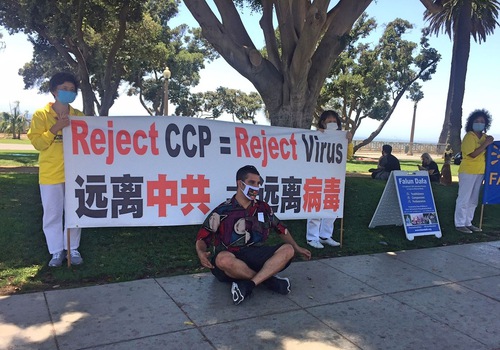 Rubin praises the practitioners’ effort in clarifying the truth year after year and took a photograph with practitioners in front of the banner.

As soon as Rubin saw the banner, “Stay Away from the CCP and the CCP Virus” he walked over to the practitioners. He already knew in great detail the crimes the CCP committed, such as harvesting organs from living Falun Gong practitioners, the genocide of the Uighurs, and the crackdown on Hong Kong residents. He had just returned from Hong Kong and said he hates what the CCP has done to the people there. He had a custom-made mask with a “CCP virus” logo to tell people how evil the CCP is.

Rubin gave practitioners a thumbs up for their years of persistent work in clarifying the truth, rain or shine.

Pery moved to L.A. from Ukraine 18 months ago. Drawn by the melodious music, she came to watch the practitioners exercise. She was eager to learn about the teachings and the five exercises.

“Looking Inward while Phoning People in Beijing as the Pandemic Intensifies”