(Minghui.org) For the past several years, Falun Gong practitioners in Düsseldorf, a major city on the Rhine, have gone to the Chinese Consulate in Düsseldorf to tell people about the practice and debunk the Chinese Communist Party’s (CCP) slanderous propaganda. Their exercise demonstrations, posters, and banners have attracted passersby, and given them an opportunity to learn about the CCP’s deceptions and cruelty. 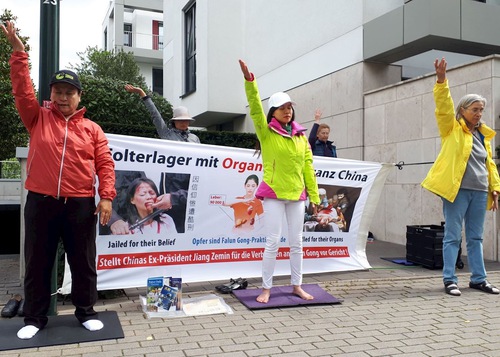 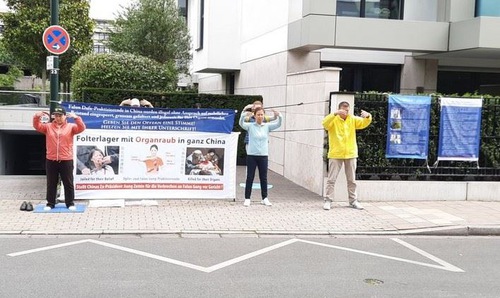 Falun Gong practitioners outside the Chinese Consulate in Düsseldorf, Germany

One man shared an interesting story. He had gone to the consulate to complete some paperwork, only to discover that he did not have the exact change, which the consulate requires, to complete his transaction. When he told the person behind the counter that he would go ask someone nearby, the person warned him, “Do not talk to those Falun Gong [practitioners], not even the police officers here.”

Thinking that was an odd thing to say, the man asked a police officer and a Falun Gong practitioner about it. The officer laughed, “Many things that they [those who work at the consulate] say and do make no sense.” After talking with practitioners, the man said, “Now I understand why the consulate officials are so scared of you—they don’t want people to know the facts. Please keep it up!”

The same person owns the open space across from the consulate as well as several nearby properties. One day the owner, an elderly gentleman, stopped by and told practitioners that he supports them coming to the consulate. He also left his contact information and said, “I know Chinese people are good, but the CCP is really bad, and it is now harming the entire world.”

A Chinese woman who had come to the consulate for paperwork was initially shocked to see the practitioners’ banners. For the past 21 years, all she had heard was the CCP’s slanderous propaganda about Falun Gong. A practitioner explained to her how the CCP has destroyed traditional values, persecuted innocent people in China, and now threatens free societies everywhere. The woman agreed that the CCP does not represent China, and thanked the practitioner for the information.