(Minghui.org) Falun Dafa (also called Falun Gong), practitioners in Munich held activities at Marienplatz Square on June 3, 2020 to clarify the truth about Falun Dafa and the ongoing persecution of this mind and body practice.

Dressed in yellow t-shirts imprinted with the words “Falun Dafa is Good,” practitioners demonstrated the exercises, which drew people’s attention. They also raised awareness of the ongoing persecution in China, reminding people not to neglect moral values, nor support the Chinese Communist Party (CCP) for economic benefits. 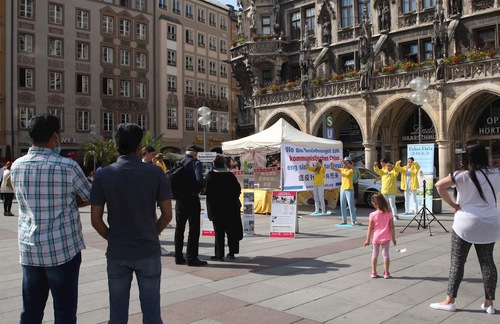 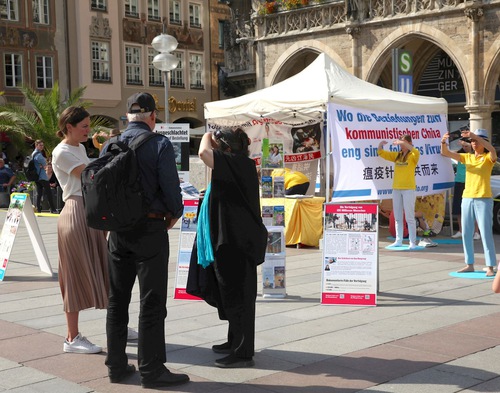 Passersby talk to practitioners about Dafa. 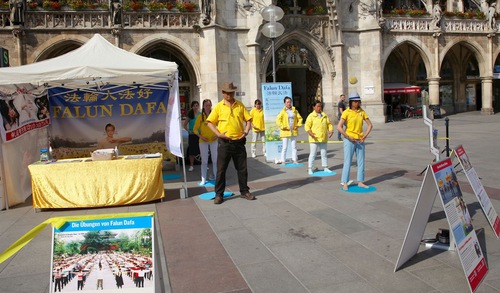 Ms. Wang came from China to study in Germany six months ago. She was shocked to see practitioners promoting Falun Dafa. She asked, “Isn’t this a cult?” Practitioners talked to her for a long time, removing from her mind the misinformation spread by the communist regime. She realized she had been deceived, and agreed to quit her youth league membership.

She said she would have continued to believe the communist propaganda if she hadn’t run into the practitioners. When she first arrived in Germany, she did not believe any information that she read or heard concerning the CCP’s human rights abuses, such as the June 4 Tiananmen Square massacre, the Hong Kong protests, and so on. She thought that the Germans had been brainwashed. She said, “I now realize it is I who have been brainwashed.”

According to practitioner Andrea, the people she spoke to that day now have a positive understanding of Falun Dafa, and know what they should do to help. After signing the petition, they asked for brochures to give to friends and family.

“Many people asked why is the CCP was persecuting Falun Gong,” said Andrea. When she explained it was because the regime is afraid of the principles Truthfulness-Compassion-Forbearance, these people agreed that these are excellent values. A German man commented, “If everyone follows these principles, there would be no problems in this world.”

A German couple from Munich expressed interest in going to a local practice site to learn the exercises. Many years ago, they saw Dafa activities in Vienna, and since then they have been paying attention to reports by media and other sources concerning the practice. They saw many Falun Gong activities in Germany as well as Austria, and have signed the petition on many occasions. They said, “It is always interesting to speak to Falun Gong practitioners. We completely support you. The next step is to learn the exercises.” They also feel that big companies and the German government should help stop this persecution.