The Spiritual Journey of a Senior Executive

(Minghui.org) “I am so fortunate to be a Falun Dafa practitioner, and I hope my story can help others who have been searching like I was,” said Liu Minghui, a senior executive at a multinational company in Taiwan.

Liu is well-respected at work and in his community. His professionalism and flexibility have earned his colleagues' respect, while his generous spirit and kindness have made him a role model at home and in the community.

Behind his successes in life, Liu had always sought the more spiritual side of life. After being disappointed with organized religion, he eventually found what he had been looking for in Falun Dafa. 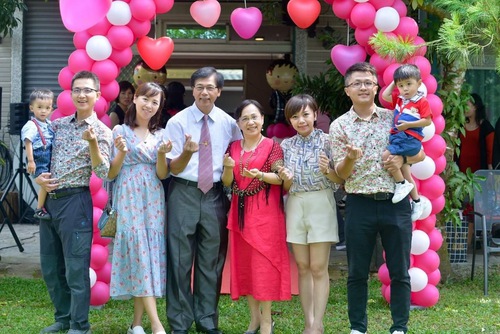 A happy family: Liu Minghui and his wife (in the center), their daughters, sons-in-law, and grandchildren.

Wish from a Young Age

Liu, 61, works for Tatung company, one of the earliest multinational companies in Taiwan with a history of 100 years. The company produces appliances, electronics, and computer hardware, and is a household name in Taiwan.

During his childhood, Liu's grandmother often took him to temples. Liu remembered seeing many paintings on the walls, including diptych paintings with scenes of paradises with fairies and divine beauties on one side and ghastly depictions of punishments, such as cutting off one’s tongue, on the other side.

“When I asked her what they meant, my grandma told me they were examples of good people and bad ones. Those who committed bad deeds and lied would end up in hell, while the those who did good deeds would rise to heaven,” he recalled.

His grandmother's words left a deep impression on his young mind and Liu knew what he would do when he grew up.

Affiliation with Religion and Disappointment

His grandmother’s words still accompanied Liu as he became an adult. After settling into a stable job and starting a family, he resumed his spiritual journey in his 30s by visiting temples. He and his wife practiced one religion for six or seven years and even became strict vegetarians. He later found that it was a place for power struggles, money, and politics. “Regardless of which religious group I tried, I found no one focused on spiritual improvement,” Liu explained, “I knew they had been degenerate and I stopped going there.”

To his surprise, he found leaving the religious organization was not straightforward. After he and his wife stopped volunteering for an organization, it sent people to distribute materials near their home defaming them. “We figured we needed to be good people anyway, so we did not do anything about it [the slandering],” Liu said.

But this experience made him cautious and over the next two or three years Liu did not interact with any spiritual groups. He just focused on working and taking good care of his family.

Liu was listening to the radio one day on his way to work when he heard about the arrest of Falun Dafa practitioners in mainland China. “At that time, I thought this was something only in the mainland, not Taiwan,” he said, “Plus, previous experiences of mine still made me nervous, so I did not look into it.”

A Book That Answered All Questions

Liu used to suffer from asthma and coughed a lot. No medicine or Chinese medicine could help him. One day in 2004, a friend visited his home, and Liu was coughing throughout the visit. The friend said he knew someone who had improved their health by practicing Falun Dafa. The friend recommended the couple give it a try.

Liu’s wife went over to the bookshelf and picked a book with a golden cover—Zhuan Falun, the main teachings of Falun Dafa. She said the book was given to her by a friend of hers in a book club, but she had not had a chance to read it.

Later that day, Liu began to read the book. “Inside the book there is a picture of Master Li Hongzhi, the founder of Falun Dafa. He is very righteous and I was deeply touched,” he recalled.

“To tell you the truth, the entire cultivation process for a practitioner is one of constantly giving up human attachments.” (Lecture One, Zhuan Falun)

As Liu continued reading, he realized he had found answers to all the questions he had previously been unable to find answers to.

Liu said all the spiritual systems that he had tried before required rituals and donations, and the more a person contributed, the more they would be praised.

“Falun Dafa is different because there is no need to pay money and the person's heart is the most important,” he explained. With no membership rosters, rituals, money, material possessions, or politics, he could tell that Falun Dafa was the pure land he yearned for since his childhood.

Liu said he had often pondered the purpose of life. Although he had read many scriptures in the past, those questions remained unanswered until he read Zhuan Falun.

He felt most happy to discover that: “Zhen-Shan-Ren is the Sole Criterion to Discern Good and Bad People.” (Lecture One, Zhuan Falun)

“The Fa principles Master teaches are very profound and yet one can easily understand them because Master explains them clearly and systematically,” he said.

Liu went looking for more information about Falun Dafa and found a nearby group exercise site. He joined the site and within three months his coughing had stopped.

“It was really strange. At the beginning, I coughed a lot. Later on, it got better and I would only cough once in a long time. In the end it totally disappeared,” he said.

Master Li in his teachings had talked about the relationship between illness and karma, and Liu had also read many stories like his on Minghui—many of them from mainland China––where people who were in very poor health were completely healed through practicing Dafa. His confidence in the practice increased a great deal.

Through reading the books, Liu found that Falun Dafa really explains the laws of the universe. Regardless of what type of conflict arises, one should first look within to see if one has a problem, and in the realities of society steadfastly cultivate. If one comes across a conflict, without the principles of Truthfulness-Compassion-Forbearance as a guide, it is easy to fall into ordinary people's framework of scolding and attacking others. “With the Fa in your heart you use the Fa to evaluate yourself, and you're more at ease in life.”

After experiencing many positive physical changes, Liu gradually found his temper had also improved dramatically. Because of stress from work, he had often been very direct when handling things. This had led to arguments with his coworkers and family members. One day while doing the fourth set of exercises, the key points of the exercise “gradual, slow, smooth” hit a chord with him. Liu decided to apply these principles in his daily life.

For example, Liu used to speed up to make it through yellow lights, and he once almost had an accident. He also had a habit of competing to be first off the mark when the light turned green. After becoming a practitioner, he realized that driving like that was risky, especially if an oncoming driver was trying to beat the yellow light, so he stopped doing it.

He also changed his mentality when buying a train ticket to visit his hometown in Hualien. The tickets sold out from time to time, and he would get upset and anxious and would complain that some travel agency or officials might be hoarding tickets. After practicing Dafa, his mindset changed and he was no longer nervous when buying tickets. He thought even a standing ticket with no seat would be just fine. Interestingly, although he purchased a ticket once right before the train departed, he was able to secure a seated ticket because someone had just returned one.

His company has a vehicle to transport employees, and Liu used to make sure he arrived at the vehicle early to secure a good seat. After he practiced Dafa, he realized this was selfish.

There were many examples like this through all aspects of his life. “I agree with the principles of Falun Dafa completely and will persist in practicing,” he said.

Liu said his negative experiences with religion were like a test or an obstacle that had almost prevented him from gaining a righteous Fa.

Liu’s wife is a calligrapher. Because of her bad experiences with some religious groups, she was initially wary of Liu practicing Falun Dafa. But after witnessing the dramatic changes in Liu's health and temperament, she became supportive. She has attended events to help promote Shen Yun through her calligraphy and told her students about the performance. 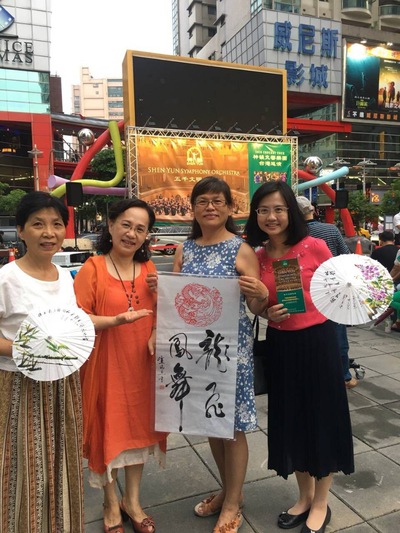 Ms. Liu (second from left) at an event to promote Shen Yun

Their two daughters also noticed that their strict father had changed and become patient and considerate. Shortly after graduating from college, his younger daughter found an IT job. One night, she got home at midnight after working overtime. Both of her parents scolded her and threatened to lock her out if she came back that late again. Their daughter cried and felt mistreated.

The next day, Liu studied the Falun Dafa teachings and knew that his behavior was wrong. He apologized to his daughter, to her surprise. “I did not expect that from you,” his daughter said with a smile.

The changes at home paralleled the changes in his work relations, which he now found much easier to handle as a practitioner. His honesty and open mind quickly earned his colleagues' trust.

As the senior executive for human resources at his company, Liu found himself in difficult situations sometimes. Management would want some of the older employees to retire, and even order that he implement it. Weighing the interests of both the company and the employees, he was often able to find solutions that benefited both parties.

For example, after some employees retired, they still had some loans to pay. Liu would communicate their difficulties to the upper management and help the retiree get work as a consultant for the company, creating a win-win scenario, as the company can still benefit from the veteran staff's expertise, but without having to pay such a high salary.

More than a dozen of Liu's colleagues have joined him to do the Falun Dafa meditation during their lunch break.

Liu is thankful to practice Falun Dafa. It has made him more compassionate and given him more wisdom to deal with complicated matters at work and at home.

In his spare time, he also raises awareness of the persecution in mainland China through different channels. He hopes the persecution will end soon and more people will have the opportunity to practice Falun Dafa.

“Finland: 'What You Are Doing Is Great!'”