(Minghui.org) The 2020 Montreal Falun Dafa Experience Sharing Conference was held on June 21. As the government had not completely removed restrictions to stop the spread of the coronavirus, most practitioners attended the conference virtually. Ten practitioners spoke about how they improved their moral character, practiced cultivation solidly, and did their part to stop the persecution of Falun Dafa in China. 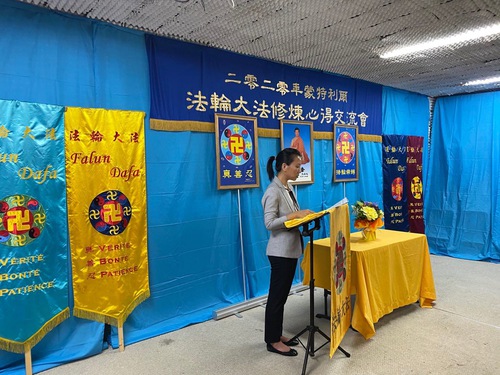 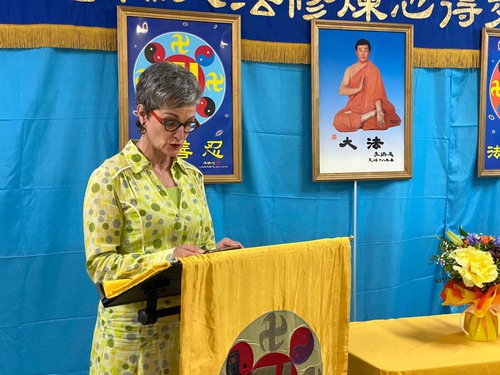 Getting Rid of Jealousy and Being Mindful of One’s Speech

Silvia, a university student in Quebec, spoke of how she became mindful of what she says. This year while promoting Shen Yun Performing Arts shows, she had a conflict with a practitioner and said something hurtful. The other party was very upset and nearly thought of quitting. Silvia realized that if she does not heed her words, it might have a negative effect on practitioners’ projects.

She said, “I also discovered that I always make hurtful remarks because of my jealousy. If I feel I'm treated unfairly, my mind is not calm, and that’s why I have bad thoughts. I think negatively of others and cannot forgive them, so I end up saying things that cause people pain.” She made up her mind to get rid of jealousy and treat others with kindness.

Exposing the Evil Nature of the CCP

Ruth, a Western practitioner, often told friends and family members about what the Chinese Communist Party (CCP) had done after the coronavirus pandemic broke out. But her words had the opposite effect. Her husband said angrily, “I can’t take it anymore. You keep talking about the CCP virus.”

She realized this was a hint that she needed to improve her cultivation. Her friends and family might also share the same feelings as her husband. She observed that when she spoke, she imposed her own ideas on others, and that it was a form of indoctrination without a practitioner’s compassion. After reading Master’s latest article “Stay Rational,” she changed her mindset and talked to people with compassion.

“In the past, I was focused on using human wit and not cultivating my heart. I mistakenly thought that I was saving people when in fact it was the power of Dafa at work,” said Ruth.

Master is Always With Me

Joan, a university student in Montreal, shared that she felt as if Master was beside her on many occasions when she tried to help Chinese people to renounce their membership in the CCP. After telling them the basic facts about Falun Dafa and the persecution in China, the other party sometimes was still not convinced. When Joan did not know what else to say, she would ask Master for help. Afterward when she repeated what she had just said, often the other person would suddenly change their attitude and agree to quit the CCP.

At the start of the coronavirus outbreak, she became very anxious about her cultivation state. This led to disruptions in her daily life as well as Dafa projects she was involved in. Through reading the teachings, she realized her thinking was wrong, and she felt grateful to Master for always looking after her.

No other practitioners live near Mr. Hong. Without a group cultivation environment, as time went by, he slacked off and many problems appeared. In January this year, an unexpected opportunity came up and he joined a media project formed by practitioners. He decided to use this environment to practice cultivation solidly.

He persisted in joining members of the project in reciting the teachings for over an hour, doing the exercises for two and a half hours, and sending righteous thoughts at the four set times daily. He read the news, searched for information, and edited news reports every day. He also found time to make phone calls to China to tell people about Falun Dafa. Gradually his cultivation problems were resolved, and he was able to balance family, work, and cultivation. He had more time to do the things required of Dafa practitioners.

He said, “Master has arranged everything for me. I feel really fortunate.”

Getting Rid of Human Notions While Promoting Shen Yun

Lucy has been involved in promoting Shen Yun since 2007. Every time she went out to distribute brochures, her legs hurt terribly. She thought it was caused by fatigue. All these years, she tried many ordinary ways to alleviate the pain. One day this year, her legs hurt again as she was giving out flyers. A thought suddenly came to her mind: “I am a Dafa disciple here to help Master save sentient beings. The pain in my legs must be a form of interference.”

“The thought was so powerful I felt a shock in my body. It was as if Master removed all those bad things in other dimensions. My legs stopped hurting. Every time I got home after handing out brochures, I felt relaxed, as if my body had been cleansed,” she said.

“Beijing in “Partial Lockdown” Due to New Coronavirus Outbreak”