(Minghui.org) Falun Gong practitioners recently held activities to introduce Falun Gong in Tampere, the main industrial center of Finland, on Saturday, June 13, 2020. Besides introducing the benefits of this mind-body cultivation practice, they also exposed the Chinese Communist Party’s (CCP) 20-year-long persecution of the practice in China and collected signatures on a petition to call for its end.

Tampere is located in southwestern Finland and is not far from Nokia. The practitioners held the activity on Kauppatori, the square at the central bus station. When they first got there, a police officer was waiting for them to verify their gathering applicantion registration.

The practitioners introduced Falun Gong to the police officer and explained that the signature collection is calling for an end to the persecution. He accepted a flier and a beautiful folded paper lotus flower. 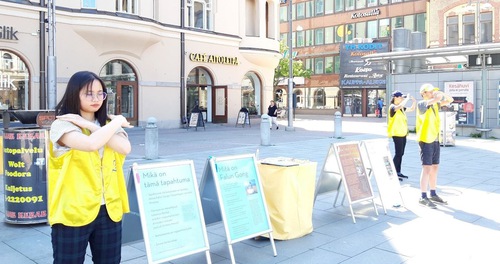 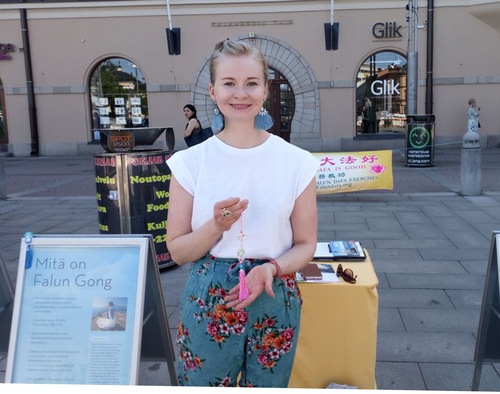 Local resident Anniina said that her husband had told her about traditional Chinese culture a few days ago, and had mentioned something about Falun Gong. So she was happy to see the practitioners on the square in her town.

She also took a Falun Gong introductory brochure for her mother. She said she would introduce Falun Gong to her mother at their upcoming summer family gathering. A practitioner gave her two paper lotus flowers.

Karoliina and her boyfriend passed by and talked with a practitioner. Her boyfriend said that his friend had been to China, and had experienced the Chinese regime's information censorship. His friend also mentioned the brutal persecution of Falun Gong in China. He remarked that people there cannot talk about Falun Gong in public. 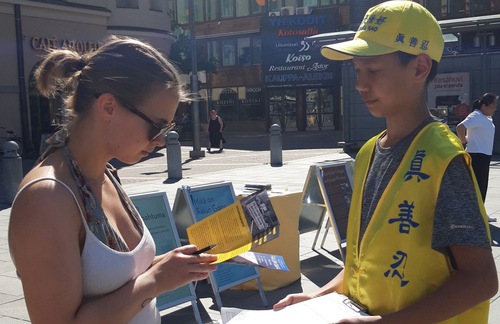 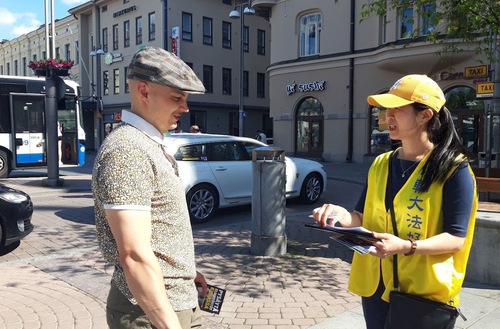 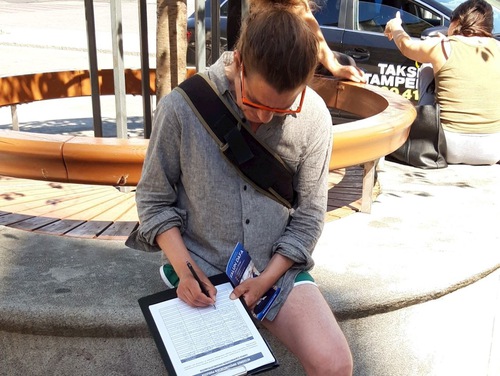 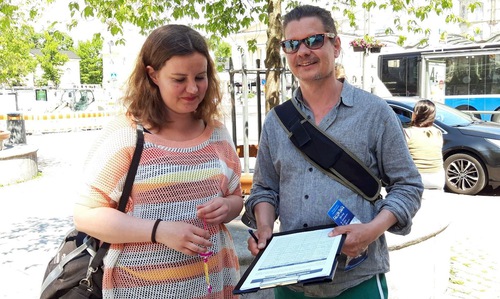 People sign the petition calling for an end to the persecution of Falun Gong.

Four young men passed by and accepted fliers from a practitioner. When they asked what it was about, a practitioner said that Falun Gong is a traditional spiritual practice whose adherents follow the principles of Truthfulness-Compassion-Forbearance.

The practitioner told them that innocent practitioners are being persecuted in China, and even have their organs harvested forcibly for the state-sanctioned organ transplant industry. The young men were appalled and signed the petition calling for an end to the persecution.

“Voices Across the Ocean: The Best Path to Safety and Peace”

“85-year-old Man Traumatized After Being Arrested for His Faith”