(Minghui.org) A Shijiazhuang City, Hebei Province resident served ten months for raising awareness about her faith in Falun Gong. During her imprisonment, Ms. Geng Shulan was force-fed and made to wear handcuffs and shackles for three consecutive days, which resulted in injuries to her wrists and back.

Ms. Geng, 58, and Ms. Li Dongmei were arrested on July 18, 2019 after being reported for talking to people about Falun Gong. They appeared in the Qiaoxi District Court on December 11, 2019 and were sentenced to ten months each in April 2020.

During the first few days Ms. Geng was held at the Shijiazhuang No. 2 Detention Center, the guards didn’t allow her to sleep and ordered her cellmates to wake her up every fifteen minutes. 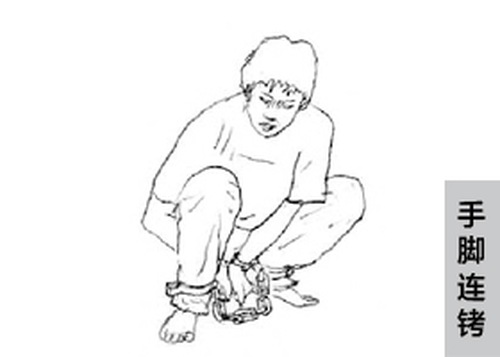 Because she refused to recite the detention center rules, the guards forced Ms. Geng to wear handcuffs and shackles chained together for three days. While chaining her, a guard kicked her in the back, causing stabbing pain. The chains weighed more than 50 lbs and she was unable to stand up. She had to squat while walking, and also had much difficulty using the restroom and taking showers. The guards didn’t allow anyone to help her or talk to her during this torture.

The handcuffs were so heavy that her skin was abraded and the scar is still visible today. She had back pain for more than a month and was unable to stand up straight.

Ms. Geng held a hunger strike in August 2019 to protest the persecution. To incite hatred against her, the head inmate of the cell forbade other inmates from eating any extra food they'd purchased for themselves as long as she didn't stop her hunger strike. The inmates then could only eat the poor quality prison-provided food, and they blamed Ms. Geng for this treatment.

When her lawyer visited several days later, the guard insisted that they'd force-fed Ms. Geng first before allowing her to meet with the lawyer. During the forced-feeding, an inmate dislocated her jaw while restraining her head. She had an intense headache and was unable to close her mouth or talk. Ms. Geng was in so much pain that she was incapacitated and couldn’t meet with the lawyer. The guards then told the lawyer that Ms. Geng refused to meet with him and derided her for having him come to the detention center "for nothing" in such hot weather.

Despite her condition, the guards continued to force-feed Ms. Geng. The forced-feedings lasted a total of 15 days. During one force-feeding, a guard threatened to feed Ms. Geng with her own excrement. The guards also charged her 35 yuan for each feeding session and withdrew more than 1,000 yuan from her commissary account.

The guards also charged Ms. Geng 200 yuan for a so-called physical examination shortly before she was released in May 2020.

Ms. Geng used to work at the No. 4 Textile Factory in Shijiazhuang City. She developed a severe sleep disorder due to her night shifts and had a kidney problem. Her legs were often swollen. However, most of her problems disappeared soon after she learned Falun Gong in 1996.

After the communist regime ordered the persecution of Falun Gong in 1999, Ms. Geng went to Beijing to appeal for justice and was arrested. After she was sent back home, the textile factory punished her by reducing her salary to 280 yuan each month, and yet she was still required to do the same amount of work. Local police and residential committee staff often harassed her from then on.

Ms. Geng was arrested again in 2000 after she went to Beijing to appeal for Falun Gong. She was fired by her workplace this time. Her husband couldn’t endure the stress of the persecution and divorced her.

Ms. Geng went to Beijing to appeal for the third time in early 2002 and was arrested again. She held a hunger strike for 19 days at the Shijiazhuang No. 2 Detention Center and was force-fed. A month later, the police sent her to Shijiazhuang Forced Labor Camp, without due process, for a three-year term.

The police continued to harass Ms. Geng after she was released. She was forced to move from place to place to avoid further persecution.

“Melbourne: "I Will Help Stop the Forced Organ Harvesting"”