(Minghui.org) I opened a Japanese restaurant in central Ottawa after immigrating to Canada. I began to practice Falun Dafa in 2007 and have had many extraordinary experiences since then.

In 2007—I was in my 50s then—a Falun Dafa practitioner in Ottawa introduced me to the main book of the practice, Zhuan Falun. I can still remember the first time I read the book, I simply could not put it down. From then on, I have practiced Dafa. I understood the principles of the universe by studying the teachings. I started out as an atheist, but I learned to embrace traditional Chinese culture and understood that good will be rewarded with good and evil will incur punishment.

As a practitioner, I evaluate my each and every thought and action to make sure they are in line with the principles of the practice—Truthfulness-Compassion-Forbearance. I treat others with kindness and don’t argue when there is a conflict. There is a positive energy field in my restaurant, and my employees get along well with one another. 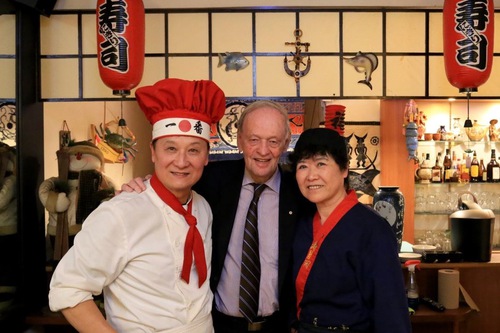 Because I go to work with a cheerful attitude every day, the food I cook turns out delicious. My restaurant has had a good reputation for many years. Many Canadian celebrities and politicians, including Members of Parliament and three Canadian prime ministers, have dined in my restaurant on several occasions. I credit this to practicing Falun Dafa.

I was in three major car accidents after I started practicing Falun Dafa. In one of them, my car was completely destroyed, yet I was fine. The most extraordinary thing happened in the third car crash. I drove to Montreal to attend a parade just before Christmas. On the way back, I fell asleep while driving. The car hit a telephone pole and ended up in a field of reeds next to the highway. The engine was damaged and stopped running. My mind was blank and I did not know how to maneuver the car out of the field.

The practitioner sitting in the back called out to Master Li (the founder of Falun Dafa) for help. A miracle happened. The car moved out of the reeds, up the slope, and stopped by the side of the road. Everyone in the car was fine. The next day when I returned to the scene of the accident, I saw tire tracks going into the field of reeds, but there were none in the opposite direction.

Master Is Always Looking Out for Us

One Christmas, several practitioners and I planned to go to Syracuse, New York, to help prepare meals for Shen Yun performers. But I had just purchased a new car, and it would take five business days to get the insurance and license plate. As I was wondering how to resolve the situation, the car dealership called me the day before we were due to depart and said that everything was settled. The next day we hit the road as planned. I am certain that Master is always looking out for us. Thank you, Master!

“After Losing His Wife, Daughter, and Daughter-in-law, 90-year-old Man Devastated to See His Son Perish in the Persecution”