Munich, Germany: People Ask What They Can Do to Help Stop the Persecution

(Minghui.org) Falun Dafa practitioners held activities on Karlsplatz and Max-Joseph Paltz on May 26 and 28, 2020, to raise awareness of the CCP's (Chinese Communist Party) persecution. They introduced the ancient spiritual practice and told people how the CCP has brutally persecuted it for more than 20 years. 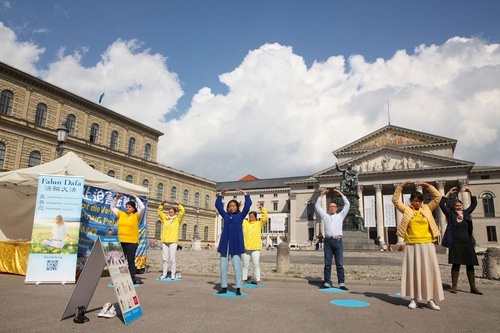 Practitioners do the exercises on Max-Joseph Paltz, Munich on May 28, 2020.

With Munich's reopening from lockdown due the coronavirus pandemic, there are more pedestrians on the streets. Falun Dafa practitioners demonstrated the five sets of exercises. They also set up a large poster that read, “Falun Dafa is good” and posters with information about the CCP state-sanctioned live organ harvesting, which drew the attention of many people.

Some asked why the CCP would persecute a peaceful meditation practice, and several asked what they could do to help stop the persecution. Several more asked where they could learn the exercises. 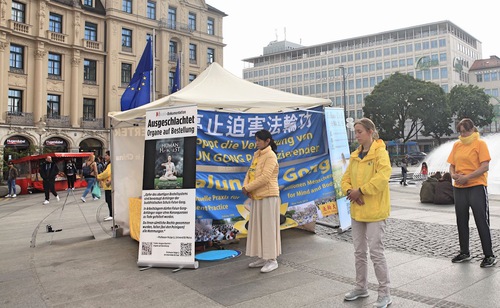 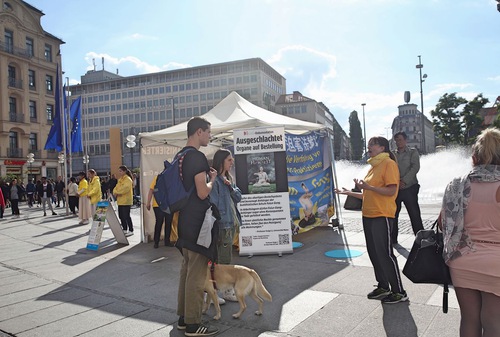 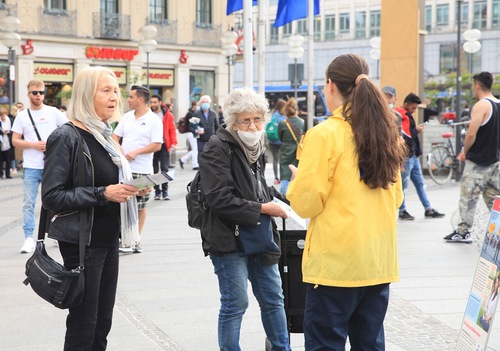 Passersby pause to talk with practitioners to learn about Falun Dafa.

A middle-aged woman who asked for more information said it was horrible that the CCP was harvesting organs from practitioners while they were still alive.

“Is this (the CCP’s live organ harvesting) true?” an elderly lady asked. She wondered why it was not well known.

A practitioner reminded her that thousands of people were killed in the Dachau concentration camp. The residents in nearby Dachau were unaware of what was happening nearby.

The lady immediately understood and asked for more information about the persecution. She spoke with the practitioner for a long time. 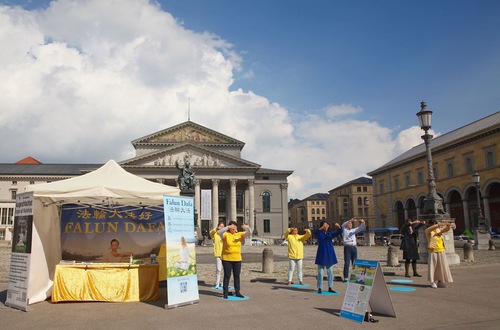 Practitioners demonstrate the Falun Dafa exercises on Max-Joseph Paltz on May 28, 2020.

“I will tell my mom—that will make her happy,” a young man in his 20s said when he stopped at the event.

He explained that his mother practices Falun Dafa and he often goes out with her to distribute information about it. His mother was incarcerated several times by the CCP. He looked for Falun Dafa practitioners after leaving China and was happy he found them.

“What can I do to help?” a young social worker asked after he read the information about the CCP’s live organ harvesting.

He said he'd heard about the crime of organ harvesting before. A practitioner told him to contact local governmental officials, colleagues, and friends to raise awareness and work together to stop the brutality.

The practitioner told him that the CCP’s persecution of practitioners who follow Truthfulness-Compassion-Forbearance had gone on for 22 years. Many governments, including Germany’s, tolerate these human rights abuses.

She explained that when democratic countries continue to appease the CCP, the Party can continue the persecution. But since the Party is inherently dishonest and lies to further its own ends, it covered up the initial coronavirus outbreak which led to a global pandemic.

The practitioner said that Germans should speak out against the CCP’s persecution of Falun Dafa. The young man agreed and said, “People should not remain silent and do nothing about it.”

Falun Dafa (also known as Falun Gong) was first taught publicly in 1992. Nearly 100 million people across China soon started practicing and saw their health and character improve. Jiang Zemin, the former head of the CCP, perceived the spiritual discipline's growing popularity as a threat to the Party's atheistic ideology and on July 20, 1999, issued an order to persecute Falun Dafa.

Minghui.org has confirmed the deaths of thousands of Falun Dafa practitioners as a direct result of the persecution over the past 22 years; the actual number is suspected to be much higher. More have been imprisoned and tortured for their faith.

“Interference in Fa Study Is a Form of Tribulation”

“66-year-old Man Arrested for His Faith and Family Harassed”