San Diego: Falun Gong Practitioners Raise Awareness at a Chinese Supermarket on the Anniversary of April 25

(Minghui.org) During the coronavirus outbreak, Falun Gong practitioners in San Diego have persisted in raising awareness of the spiritual and meditation discipline in front of a supermarket in a Chinese community while adhering to social distancing rules.

For more than a decade, people in San Diego have learned about Falun Gong through the practitioners' activities in front of this supermarket during the weekends, and more than 7,000 people have chosen to quit the Chinese Communist Party (CCP) and its affiliated organizations at this site alone.

Practitioners started their activity at the supermarket early in the morning on April 25, 2020, the 21st anniversary of the April 25 appeal in Beijing in 1999. The practitioners distributed flyers about the peaceful appeal as well as a special newsletter in Chinese about the CCP's coverup of the coronavirus outbreak.

A woman from Taiwan thanked a practitioner for sharing the special newsletter about the coronavirus. “I used to know little about the Chinese Communist Party, but its cover-up of coronavirus has clearly shown its deceptive nature,” she said. 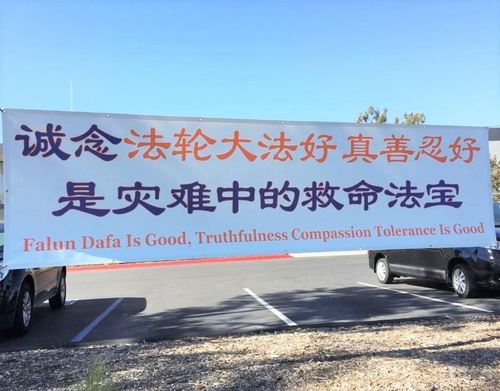 The banner says, “Sincerely reciting 'Falun Dafa is Good. Truthfulness-Compassion-Forbearance is Good,' is a life-saving treasure during calamities.”

A Chinese shopper told practitioners that he had memorized the phrases, “Falun Dafa is good” and “Truthfulness-Compassion-Forbearance is good,” which the practitioners had emblazoned on a large banner. He said that his trip to the supermarket had a dual purpose because he also wanted to pick up a copy of The Epoch Times.

Practitioners had prepared lucky charms printed with the two phrases to give to customers, and many people were happy to receive one. Some took additional charms to give to their family members.

A local Chinese resident expressed her disgust for the CCP to practitioners: “The Chinese Communist Party has deceived the people countless times. I read stories about Zhou the Exploiter and the White Haired Girl since I was young. I have since learned that they were fake,” she said. “The notorious People’s Communes were forced on the people and starved tens of millions of people, but the Communist Party has never admitted to having done anything wrong. It’s an evil force against humanity.”

A woman from China told the practitioner that she had personally experienced the CCP’s persecution and knew about its evil nature very well.

After standing in front of the supermarket for many years, practitioners have witnessed people’s attitudes change. Chinese shoppers used to give practitioners the cold shoulder when they first started, but over time they gradually warmed to them.

If a practitioner missed going to the supermarket on a given weekend, people would ask if they were okay the next time they came. Some people told practitioners they admired their persistent efforts, and many people encouraged practitioners to keep up their great work.

“Movie: Coming for You”