(Minghui.org) As the Wuhan virus, also known as the CCP virus (named after the Chinese Communist Party due to its constant cover-ups and disinformation) continues to rage around the world, many people have recovered after distancing themselves from the CCP by sincerely reciting “Falun Dafa is good, Truthfulness-Compassion-Forbearance is good.”

Falun Dafa, also known as Falun Gong, is a meditation system based on the principles of Truthfulness-Compassion-Forbearance. More than one hundred million people have taken up the practice since it was introduced to the public in China in 1992.

The CCP, which thrives on class struggle, violence, and lies, deemed Falun Dafa a threat as the practice's popularity soared, and in July 1999 it started a nationwide campaign to eliminate it.

Falun Dafa practitioners have been peacefully exposing the CCP's persecution for the past 21 years. Ever since the coronavirus broke out, they have also been telling people how the CCP has been using the same cover-up and deceitful tactics in its handling of the pandemic as in the persecution of Falun Dafa.

At the same time, with no cure for the CCP virus in sight, practitioners have been encouraging everyone to repeat “Falun Dafa is good and Truthfulness-Compassion-Forbearance is good,” inspired by Minghui reports of people regaining their health after reciting the phrases.

One may wonder why reciting such simple phrases would have such amazing healing power. Traditional Chinese culture believes that mind and body are the same and that a person with kind thoughts will be blessed.

A Falun Dafa practitioner in France tells how her aunt, her tenant, and her uncle's friend recovered from the coronavirus by reciting, “Falun Dafa is good, Truthfulness-Compassion-Forbearance is good.”

My name is Thuy Anh and I live in Paris, France. Since I began to practice Falun Dafa a year ago, I have greatly benefited, both physically and mentally. 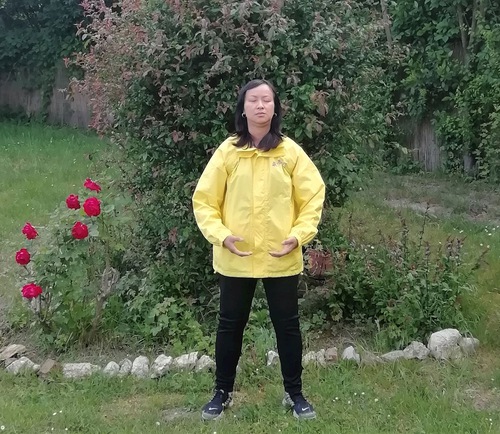 Thuy Anh began to practice Falun Dafa about a year ago.

When the pandemic reached Paris, my aunt, my tenant, and one of my uncle’s friends all came down with the disease. Below are their stories.

My aunt, Nguyen Thi Hong Ngoc, is 78 and also lives in Paris. In late March, my cousin called to say that it had been confirmed that my aunt had the virus and had been taken to an emergency room after having a fever for over a week and then losing consciousness.

I told my cousin about the relationship between the coronavirus and the CCP. “I have practiced Falun Dafa for one year,” I said, “and I have heard and experienced so many miracles. Please give your mother the Falun Dafa audio lectures to listen to and ask her to repeat ‘Falun Dafa is good, Truthfulness-Compassion-Forbearance is good.’ It really will help her.”

My cousin agreed, but I still wanted to make sure that my aunt would do that. Since I was not allowed to visit her, I decided to try my luck and give her a call. Surprisingly, she somehow regained consciousness just then and answered the phone. Since I had talked with her about Falun Dafa before, I simply reminded her to recite the two phrases and relax while listening to the audio lectures.

By the next morning, all her symptoms had surprisingly disappeared. She called me and we talked for about 20 minutes. “You know, you have recommended that I read Zhuan Falun (the main teachings of Falun Dafa) a few times in the past, but I never did,” she said. “This time I will definitely read it.”

Several days later, she was discharged and returned home. “I am reading Zhuan Falun these days,” she called to say. “And I look forward to joining the group exercises once the stay-at-home order is lifted.” 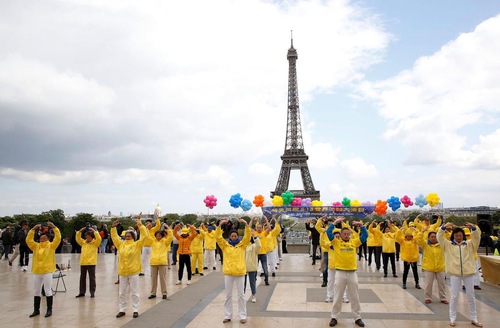 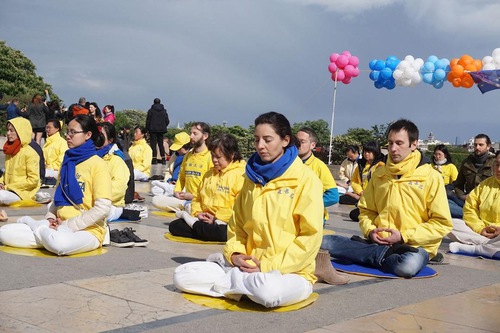 Falun Dafa practitioners did the exercises together to celebrate World Falun Dafa Day on Human Rights Square near the Eiffel Tower in Paris on May 5, 2019.

Nguyen Tong is a tenant in my rental apartment. In April he called me before dinner and, in a weak voice, asked if I would help close the vent in the bathroom since he was sick.

I hurried over and checked the vent. It was fine, covered with a wind baffle, and I closed it. That should not have made him sick.

Tong was in bed. Wearing a wool hat and covered with several blankets, he was curled up like a teddy bear. Through his face covering, he told me he had a fever. The heat was already at the highest setting and the room was stifling hot. But he still felt cold and kept shivering. He said he had contacted an emergency hotline. Someone came but left quickly after giving him some fever medicine.

Because he still had fever, I stayed and chatted with him. I told him how the practice of Falun Dafa had helped me become a better person and improved my health. “Last New Year, I went to Vietnam to visit my parents. At that time, I had practiced Falun Dafa for less than a year, but my mother could hardly recognize me—she said I looked much younger and prettier,” I explained.

Before I left, I wrote “Falun Dafa is good, Truthfulness-Compassion-Forbearance is good” on a piece of paper and left it by his bed.

At noon the following day, I went to see him again with a copy of Zhuan Falun in French. When I arrived, I noticed the heat had been turned down. Tong was still in bed, but he had only one blanket on him.

“I feel much better now after reciting the words you wrote down,” he said. “Thank you! I even went out this morning and bought some food.” I was really happy for him.

That afternoon, he was coughing up a little blood and went to get tested. He was positive and immediately hospitalized. I reminded him to continue reciting the phrases.

He followed my advice and got better and better. The next day, all his symptoms were gone. He stopped coughing and the fever vanished. Two days later, he called me to say that he’d already returned home.

Tong has also begun to read Zhuan Falun and plans to visit a practice site to learn the exercises when the stay-at-home period is over.

A Friend of My Uncle

More than 20 people in my extended family practice Falun Dafa. We often tell other family members about the practice, and they knew one will be blessed for embracing the principles of Truthfulness-Compassion-Forbearance.

In April, my 79-year-old uncle called me to say that his friend Nguyen Tu Thai had recently been diagnosed with both throat cancer and the coronavirus. Remembering the benefits of Falun Dafa I had explained earlier, he wanted to know if there was anything he could do to help his friend.

I told him the phrases and explained that, if Thai could recite them sincerely, miracles might happen.

The next morning, Thai called my uncle to say he felt much better. Two days later, the symptoms were gone and he was discharged.

“A First Year Practitioner’s Experience: Letting Go of My Attachment to Showing Off”