(Minghui.org) May 13, 2020, was World Falun Dafa Day and the 28th anniversary of Falun Dafa's introduction to the public. It was also the birthday of Master Li, the practice's founder.

Dr. Alejandro G. Cowes, attorney for the plaintiffs in the Argentine lawsuit against former Chinese Communist Party Leader Jiang Zemin and former 610 Office head Luo Gan, sent a letter to mark the occasion on May 16, 2020. 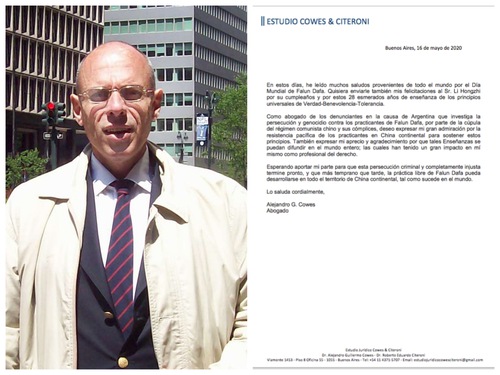 “These past days, I have read many greetings from around the world for World Falun Dafa Day,” Dr. Cowes stated. “I would also like to send my congratulations to Mr. Li Hongzhi on his birthday and on these laborious 28 years of teaching the universal principles of Truthfulness-Compassion-Forbearance.”

“As the attorney for the plaintiffs in Argentina’s lawsuit investigating the persecution and genocide against Falun Dafa practitioners by the Chinese Communist regime and its accomplices, I wish to express my great admiration for the peaceful resistance of Falun Dafa practitioners in mainland China to uphold these principles. I also express my appreciation and gratitude that such Teachings can be spread throughout the world; they have had a great impact on me in my legal profession.

“I hope to do my part to ensure that this criminal and completely unjust persecution ends soon, and that sooner rather than later, Falun Dafa can be practiced freely throughout mainland China, as it is throughout the world.”

On December 13, 2005, the Falun Dafa Association of Argentina (FDAA) filed a lawsuit against then-Chinese Communist Party Standing Committee member and head of the 610 Office Luo Gan for torture and genocide. The FDAA filed the lawsuit while Luo was visiting Argentina.

Dr. Cowes was one of two attorneys who filed the initial lawsuit. He and the other attorney, Adolfo Casabal Elia, represented the practitioners in the lawsuit free of charge.

The judge, Octavio Araoz de Lamadrid of Federal Court No. 9, accepted the case and later added former Chinese leader Jiang Zemin as a defendant, after learning that Jiang had launched the persecution of Falun Gong in China.

Four years later, on December 17, 2009, Judge Lamadrid issued a national and international order requesting that Interpol capture defendants Jiang and Luo if they travel to Argentina or any countries that have extradition treaties with Argentina.

Following the court's decision, the Chinese Embassy in Argentina swiftly took action and put pressure on members of the Argentine state department, elected officials and court officials, and Judge Lamadrid was forced to resign. The judge who replaced Lamadrid revoked the international arrest warrants for Jiang and Luo and closed the case on his first day in office, citing lack of evidence.

The FDAA appealed to the Federal Court of Criminal Appeals, but the court rejected the case in December 2010 based on the principle of “non bis in idem.” The court was stating that if the International Criminal Court has decided the case against the same defendants, no other court may try the same case. A similar case about human rights abuses against Falun Gong practitioners was brought in Spain, so the Argentine Court of Appeals ruled that the principle applied.

The FDAA then appealed to the Criminal High Court of Argentina, pointing out that political pressure had caused the lower court to reject their case and that the principle of “non bis in idem” should not be applied before the accused were officially convicted.

The Criminal High Court of Argentina announced its decision to reopen the case on April 17, 2013.

“Belated News: After Disabled Veteran Suffered Brutal Persecution, His Wife Has Passed Away from Long-term Depression”