(Minghui.org) After Mr. Li Hongzhi taught the first nine-day Falun Dafa workshop in Changchun in 1992, the spiritual and meditation discipline quickly spread throughout China. Practitioners outside China began introducing Falun Dafa to the public through free workshops and instructional sessions. Practitioners in Toronto have regularly held workshops in cultural centers, a bookstore in Pacific Mall, and their own homes.

Mrs. Gu Xin, a practitioner in Toronto, recounted many amazing touching stories she encountered while hosting workshops in her home. 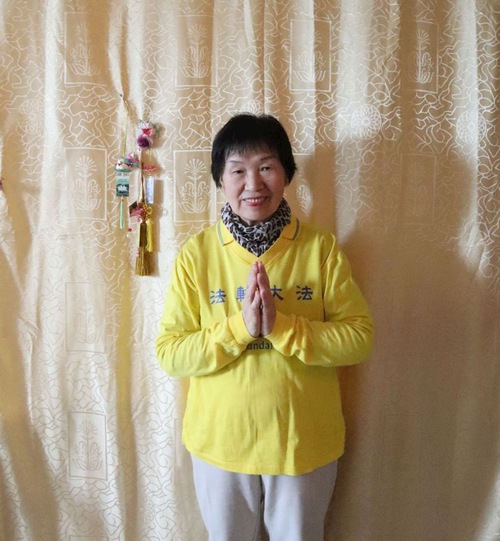 Sharing the Benefits of Falun Dafa

Mrs. Gu, a retired college professor in her 80s, started practicing Falun Dafa when she lived in Sichuan Province, China in 1994. Before she began practicing, she had more than 10 diseases, including Ménière's disease, cholecystitis, gastritis, rheumatoid arthritis throughout her body, nephritis, and insomnia.

“I practiced several forms of qigong, but none of them helped. When my colleague invited me to go to a Falun Dafa workshop, I only agreed just because I didn’t want to let her down. We learned the first two exercises on the first day. To my surprise, I felt so light afterward, like I was floating!”

Mrs. Gu was able to climb to the sixth floor easily, where before she would pant for a long time. The night after the first workshop, she slept soundly without having to take any medicine. Amazed by the effects of the practice, she decided to continue. After three months, all her diseases were resolved.

With a wish to share the benefits of Falun Dafa, Mrs. Gu started hosting free workshops in her home in China before the persecution started. After she came to the U.S., she and other practitioners in her area have offered 69 workshops. Many Chinese people who attended quit the Chinese Communist Party after learning about Dafa and how it's persecuted in China.

Patient with Serious Injuries Sits Up after Three Days

In 2010, a husband and wife in their 70s, Mr. An and Mrs. Liu, came to the workshop in Mrs. Liu’s home. Mr. An wore a metal brace because his chest and waist had been seriously injured. Mrs. Liu had coronary heart disease, high blood pressure and several other diseases. They had just come from China to visit their daughter in Toronto. When they heard of Falun Dafa’s effects on health, they decided to attend the nearest workshop.

Mr. An couldn’t sit to watch the video lectures due to his injury. He had to lie on the sofa. On the third day, his back looked much straighter, and he was able to sit. He started trying to sit with his legs crossed!

He was so happy that he attended two nine-day workshops. His health gradually improved. Mrs. Liu had a physical exam after attending the workshops, and she was happily surprised that both her coronary heart disease and high blood pressure were gone.

Mr. An was very touched. He said, “Falun Dafa is so great! I have to practice it!” He called his family in China and told them how powerful Falun Dafa is. With his help, about 20 of his family members and relatives decided to quit the Communist Party.

A young man with the last name Sun attended a workshop while he was in college. One day, he fell down the stairs at work and couldn’t move. He didn’t lose consciousness or have any scratches, but his body ached all over. He was taken to a hospital. A doctor told him that his internal organs had been dislocated and that he would have to stay in bed for at least 6 months or have corrective surgery.

Sun decided not to have surgery. One day while lying in bed, he suddenly remembered he had practiced Falun Dafa. He thought, “How come I didn’t have any bruises if the fall was so bad that my organs were dislocated? Master must have protected me, which means my organs can return to their correct locations.”

He slowly got up and started reading the book Zhuan Falun. Disregarding his pain, he persistently read the book while leaning on the bed. After less than three months, he was able to return to work. He thought Falun Dafa was great and told his girlfriend about it. They bought tickets to watch Shen Yun Performing Arts.

Protected During a Car Accident

Mr. Huang is a new practitioner from Guangdong Province. His aunt picked him up from the workshop. She also gave a ride to another new practitioner, Ms. Weng. His aunt’s two children were also in the car. On their way home, another car slammed into theirs and completely destroyed it.

When the police arrived and saw how badly the car had been hit, they thought no one survived. But they were surprised to find that none of the five passengers had even a scratch. Mr. Huang’s glasses flew off, but his eyes weren’t injured. Ms. Weng was holding a Falun Dafa book when the crash happened. They were stunned but completely fine.

Huang and Wen were very touched that they had been protected by Master Li. Together with Huang’s aunt, they pressed their hands in front of their chest (a gesture of respect) and thanked Master Li for protecting them. The police thought it was a miracle.

“My Coworker Ms. Xu: “I Also Want to Save People””