Clarifying the Truth to Orthodox Jews in Israel

(Minghui.org) In April 2020, large print announcements were posted in neighborhoods of ultra-Orthodox religious Jews. It began in the cities of Bnei Brak and Jerusalem and continued to other cities, including Beit Shemesh, Kiryat Yearim, Modi’in Illit, Beitar Illit, and Safed – places with large ultra-Orthodox (Haredi) Jewish populations.

Haredi is a designation for ultra-Orthodox and conservative Jewish religious communities, which practice a traditional Jewish lifestyle and adhere to cultural conservatism. The ultra-Orthodox live in communities, and have deliberately withdrawn from the outside world with the aim of protecting themselves from modern values and innovations, which are not acceptable to them. They avoid consuming non-ultra-Orthodox media, most do not even watch TV, and they are not exposed to the Internet or non-ultra-Orthodox newspapers. They consume information only from orthodox newspapers and bulletin boards, and mostly from the great rabbis who they consider the supreme authority in all matters.

The announcements were hung on display boards on the streets. They read:

The great secret of the communist regime in China is exposed, the same regime which brought the coronavirus pandemic upon the world and to the people of Israel!

China’s communist regime has been lying and hiding crimes from the eyes of the world for decades. It also hid the epidemic for weeks, causing it to spread to the world and severely hurt the people of Israel.

China’s regime has been persecuting and killing masses of people for 20 years, because of their faith, for the purpose of selling their organs (hearts, livers, kidneys) for the highest bidder [with] huge profit for those in power and their relatives!

Falun Gong practitioners (who believe that people should conduct themselves according to high morals and live in accordance to the principles of Truthfulness, Compassion, and Forbearance), as well as Christians and Uygur Muslims, are thrown alive to the operation tables, their organs extracted by force, and their bodies cremated.

Rabbi Yosef Shalom Eliashiv ZT”L (“may the memory of the righteous be a blessing”), ruled on the subject of traveling to China for organ transplants:

“It is a desecration of God's name, and giving legitimization and justification for bloodshed and contempt for the dead.”

Our goal is to expose this information and bring out the truth.

Let us pray that the evil communist regime is eliminated from the face of the world!

Please help bring the information to the great rabbis of our time, and to all your friends and family, for the sake of bringing out the truth and eradicating the plague soon. 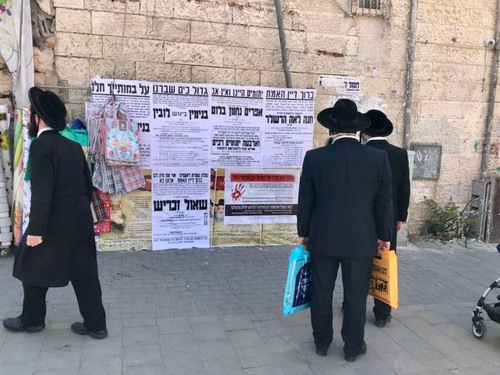 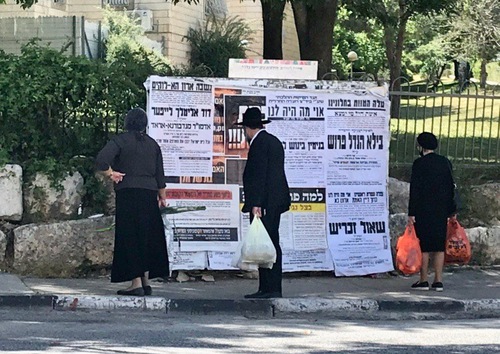 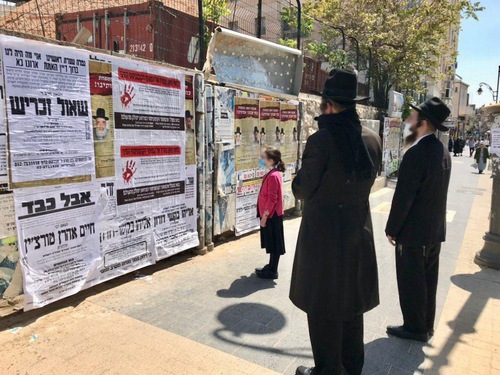 Haredi Jews read about the crimes of the Chinese Communist Party from the boards.

The bulletins included phone numbers and email addresses of two Israeli Falun Gong practitioners who were part of the team that initiated the project.

The wording of the posters matched the style of ads regularly distributed among ultra-Orthodox Jews. The bulletin content links the pandemic that spread from China to the world as a result of the Chinese Communist Party's (CCP) deliberate cover-up of the outbreak, and its crimes against people of faith in China, including Falun Gong practitioners. The ad features a quote by Rabbi Eliashiv, a prominent leader of the ultra-Orthodox public in Israel. He ruled against traveling to China for organ transplants (transplant tourism) as early as 2008.

The purpose of the announcements was not to convince people to practice Falun Gong, but to raise awareness of the CCP’s crimes.

The project is a model of collaboration among Israeli Falun Gong practitioners, from inception to implementation. Each contributed their own talents, including phrasing the announcements, designing the graphics, calculating costs, deciding where to hang the posters, and answering phone calls.

As soon as the bulletins were put up, dozens of calls started coming in. Most callers condemned the CCP’s crimes. Some of the callers were appalled, asking what they could do to help fight against the powerful communist regime. One person took interest in Falun Gong, and another wanted to learn about the Falun Gong exercises.

One person posted about the subject online, another suggested that all nations should boycott China, and someone else said the practitioners were doing a great Mitzvah (good deed). Callers who wanted to learn more were directed to videos about the cruel reality in China and materials about the international tribunal in London that examined evidence of forced organ harvesting in China.

While some callers encouraged practitioners with “Well done!” and “Godspeed,” others expressed doubt that posting the information could bring change. After talking with practitioners, though, some became more optimistic about the possibility of change occurring in China in the near future.

A group of 12 youngsters from the religious school Hebron Yeshiva in Jerusalem were deeply appalled and decided to go to Safed and hold group prayers to stop the atrocities in China.