(Minghui.org) Falun Dafa practitioners in Oslo, Norway, celebrated the 21st annual World Falun Dafa Day on May 9 and May 13, 2020. They thanked Mr. Li Hongzhi for teaching the universal principles of Truthfulness-Compassion-Forbearance in such troubled times and for helping people move toward returning to one's true self.

Mr. Li Hongzhi, the founder of Falun Dafa, held the first class to teach Falun Dafa on May 13, 1992, at the Changchun 5th Middle School. About 180 people attended the class. Twenty-eight years later, Falun Dafa is now practiced all over the world by over 100 million people.

Celebratory events were held near the National Theatre in Oslo as well as in front of Olso Congress Centre. Practitioners demonstrated the Falun Dafa exercises, talked to people about the persecution in China, played music, and sang songs. There were many interested onlookers.

Norwegian practitioner Henriette commented that she had “a lot to say” but would summarize her thoughts in two sentences: “Thank you, Master Li, for helping us all the time and never giving up on us! Thank you, Master, for giving us such boundless wonder,” she said.

May in Norway is the beginning of spring, the season when the ice and snow melt and nature awakens. For Henriette, May is the season of hope: “Today is also Master's birthday. Spring has come and nature has awakened. Perhaps this is not a coincidence.” 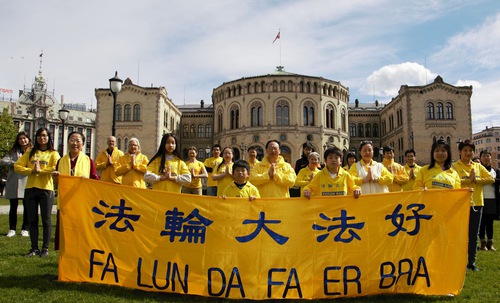 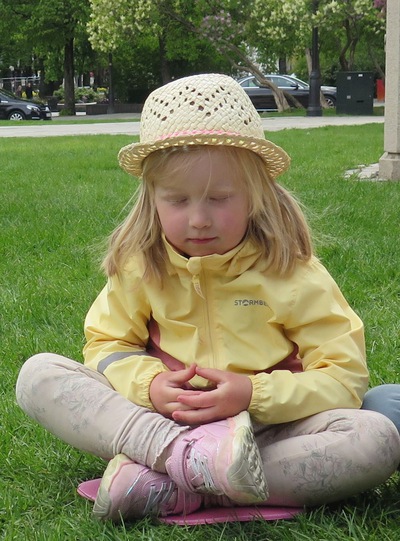 A little practitioner does the Falun Dafa meditation on the lawn in front of the Oslo Congress Centre on May 13, 2020.

Annette is a fan of yoga. She was riding her bike past Congress Centre on May 13 when she saw the practitioners doing the Falun Dafa exercises. She watched for a long time and listened to the peaceful exercise music.

When she learned that Falun Dafa is a cultivation method based on the universal principles of Truthfulness-Compassion-Forbearance, she said, “I felt the peace and the compassion. The feeling began in my lower abdomen, then ascended to my heart. It was a strong sensation. Tears came to my eyes.”

She told practitioners several times that watching them really moved her. She thanked them for such a positive experience when the entire world has been so badly hit by the CCP virus (also known as the coronavirus). She wished them good luck with all their efforts.

Aga is an avid photographer. He often searches for creative subjects in Oslo's downtown area. He stopped and spoke with practitioners at the Falun Dafa Day celebrations.

He learned that Falun Dafa practitioners follow the principles of Truthfulness-Compassion-Forbearance to improve their character and that the Chinese Communist Party (CCP) began to persecute the practice in 1999.

Aga also learned that practitioners in China are routinely arrested, tortured, and even killed for their organs. That really shocked him, and he said he wanted to do something to help stop it. He decided to photograph the practitioners exercising. He set up his camera and concentrated on his work. When he was satisfied with what he had shot, he put a Falun Dafa flyer into his bag and asked for the Falun Dafa website address.

“I will add annotations to the photos, then upload them to my website. I will put a link to your website so that people can go to your website and find out about Falun Dafa. I hope that will do something to help stop the persecution. I can only do a little. But if many people can do a little, combined together it would be huge,” he said. “And thank you for what you do. I wish you good luck,”

Linh came to Norway from Vietnam 30 years ago to escape the Viet Cong. She had heard about Falun Dafa from a relative and also knew about the persecution practitioners face in China. She came to the event on May 9 with her nephew and her nephew's wife. “I came to support the Falun Dafa event,” she said.

She initially just watched practitioners doing the exercises, but she then started to imitate how the practitioners conjoined their hands at their lower abdomens. She copied followed her nephew's wife to learn the exercise movements. Linh also signed a petition calling on the Norwegian Congress and government to help stop the CCP's killing of practitioners for their organs. 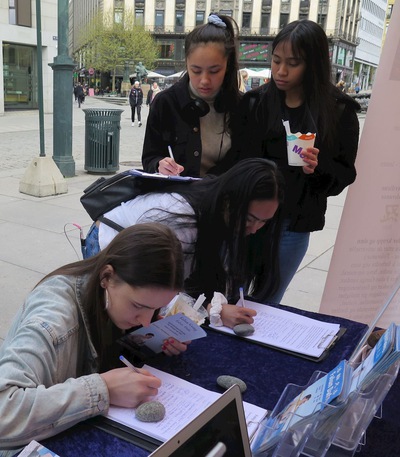 On May 13 in front of Congress Centre, Lisa, Mikkel, Natalie, and Selma (from left to right) were pleased that they could sign the petition to help stop the persecution. 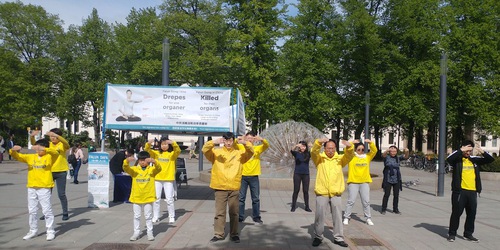 Norwegian practitioners do the exercises near the new National Theatre on May 9. 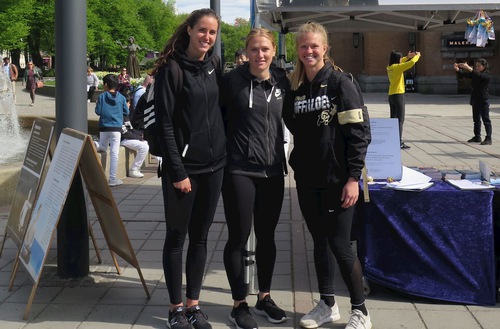 Jila (middle) from New Zealand and her two friends signed a petition on May 9 to help stop the persecution. 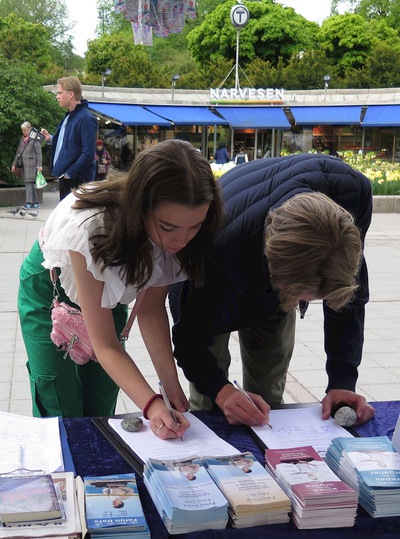 It’s hard to imagine that nine years ago when he was 16, he was tortured by severe insomnia and depression. He planned to end his life one sunny morning in early July after another sleepless night. He thought his life was meaningless and there was no reason to go on living. He made up his mind to end his life after breakfast. He left his bedroom and started toward the kitchen.

When he passed the living room, he uttered a last prayer in his heart, “God, if you are truly compassionate, please display your compassion to me!” At that very moment, his mother, who was preparing breakfast at the kitchen counter, turned to him and asked, “Do you want to learn the Falun Dafa exercises? Maybe it would help you sleep.” Thomas was dumbstruck. Without hesitation he said, “Okay.” He didn't even eat breakfast. He went upstairs and watched the video of Master teaching the Falun Dafa exercises.

His mother had been practicing Falun Dafa for a year and a half by then. Recalling her son's situation at that time, she said, “I can't bear to think of the past.”

Thomas followed along with the video and began to learn the exercises. “My thoughts immediately improved, and tears kept rolling down my face,” he recalled. “My body was rigorously purified from the very beginning. I sweated a lot and it just dripped off of me. The negative energy inside me was also purified. I felt the Falun's rotation in my lower abdomen.”

Thomas now works on a relative's farm and is learning farm management from his elders. He is conscientious and diligent, and they praise him. What he has now did not come easily, “Dafa saved me from a very, very dangerous depression. In fact, I was rescued from a life-threatening depression. I'm grateful that Dafa is with me every day. Dafa gave me the will to live. To be blunt, life is meaningless without Dafa.”

He said that, through cultivating Falun Dafa, “I now think about Truthfulness-Compassion-Forbearance and what Dafa has taught me to handle difficulties when I encounter tribulations. Cultivating in Dafa has also given me strength so that the bad things and ideas in this world don’t influence me.”

Thomas joined other practitioners in front of the Chinese embassy on May 13 to protest the persecution of Falun Dafa. He then went to the lawn in front of Congress Centre and participated in the World Falun Dafa Day celebration. He is often seen at the activities to raise awareness of the persecution in China. He said, “I hope to do as much as I can. I think this is the only way I can repay Dafa and express my gratitude to Master.” 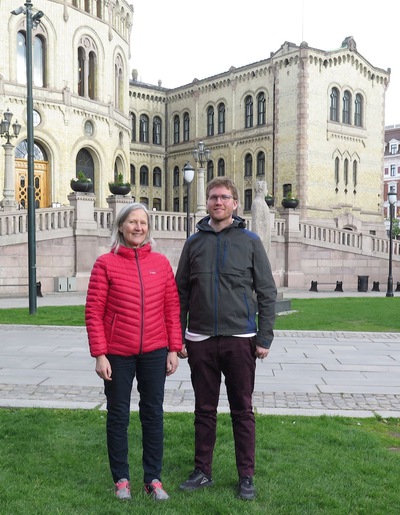 Thomas and his mother Henriette