(Minghui.org) May 13, 2020, marked the 28th anniversary of Falun Dafa’s introduction to the public in China and the 21st World Falun Dafa Day. Falun Gong (Falun Dafa) practitioners in Canberra, Australia, celebrated World Falun Dafa Day from their homes because of restrictions on gatherings due to the coronavirus pandemic. They expressed their gratitude to Master Li Hongzhi, the founder of Falun Gong, and also wished him a happy birthday. 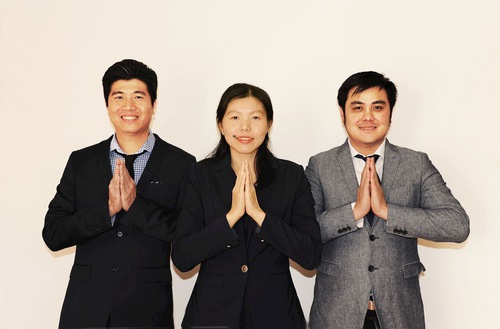 Nick Tao, 35, remembers being a troubled youth before he immigrated from Vietnam to Australia. He did not want to go to college after graduating high school and felt that he was stagnating in life. “I had become very negative,” Tao recalled. “I was smoking, and abusing alcohol and drugs. I suffered migraines and insomnia.

“Because of alcohol and drugs, I sometimes fainted. I couldn't find a job, lost confidence in life and found it hard to make a living. My mother was very anxious and asked my uncle [in Canberra] to sponsor me to study in Australia.

“When I first arrived in Australia, my uncle and cousins asked me to read Zhuan Falun and listen to the recordings of Master Li's lectures. I listened attentively and read the book.

“I started practicing Falun Gong. I soon found that all my illness symptoms had disappeared. The drug addiction and other bad habits also left me,” he said.

As the conflicts at home disappeared, his life became better. His family and colleagues all became good to him.

Nick said he was truly thankful for all that Master has done for him. “I really treasure obtaining Dafa. Falun Dafa has completely changed my life. I used to be a very bad, selfish, unhealthy person and I have become a healthy person full of energy.

“My xinxing is constantly improving. If I had not obtained Dafa, I believe my life would already have been over. I will persevere in doing the three things, and assimilate to the standard of Truthfulness-Compassion-Forbearance, fulfill my prehistoric vows and return to my original home,” he said. 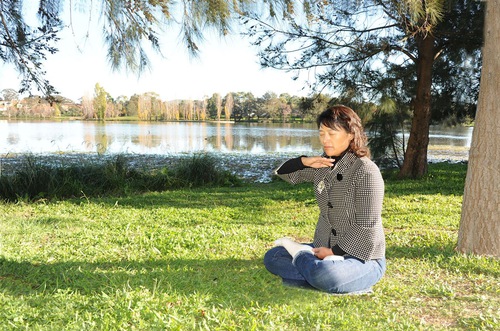 Practitioner Ms. Dong practices the sitting meditation in a park.

Ms. Dong has been practicing Falun Gong for 24 years. She still gets emotional when she recalls how she first heard about Falun Gong.

“I called home and asked about my father one day in 1996. He had been paralyzed and bedridden for 18 years. My sister-in-law said he had gone to work on a mountain. I asked others at home and confirmed that it was true. I thought it was incredible.

“I was told that he had miraculously recovered after practicing Falun Gong. My mother also had illnesses before, but she had become healthy after practicing the spiritual belief,” Ms. Dong.

Ms. Dong had many illnesses herself at that time. She was in her early 30s and had low blood pressure and had a tumor in her cervix. “I also had breast hyperplasia. My breasts were as hard as stones. I was sensitive to most foods and had allergic rhinitis,” she remembered.

Her parents' recoveries amazed her and inspired her to practice Falun Gong too.

“My parents sent me a copy of Zhuan Falun,” she recalled. “I read the book and followed Dafa's principles of Truthfulness-Compassion-Forbearance in my daily life. Before long, all my illnesses disappeared. I have been healthy ever since,” she said. 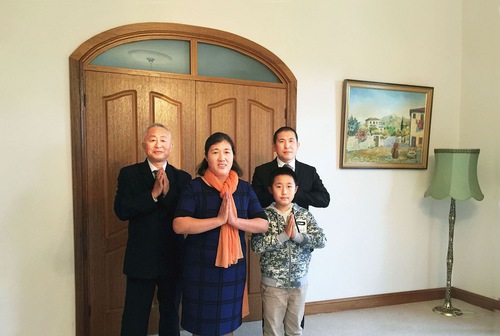 Ms. Wu and her family wish Master a happy birthday. 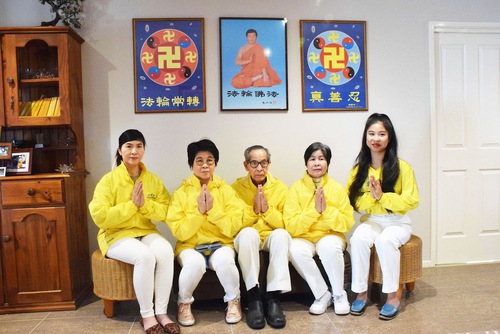 Mr. Xiao and his family wish Master a happy birthday. 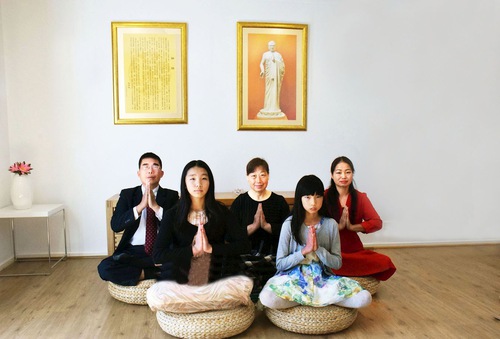 Mr. Cai (first from left in the rear row) and his family wish Master a happy birthday. 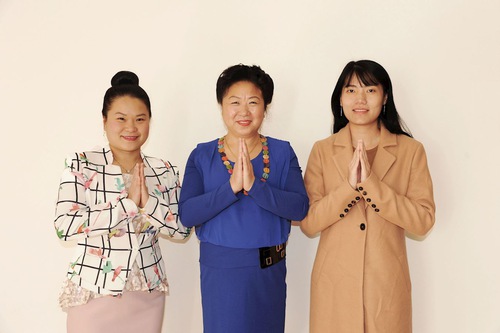 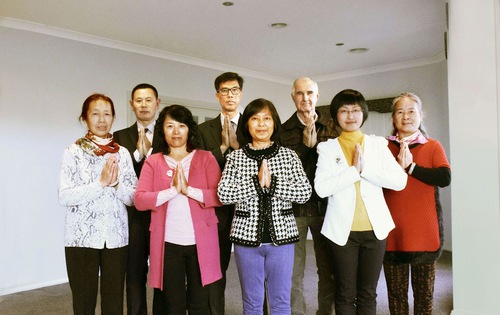