(Minghui.org) May 13, 2020 marks the 21st World Falun Dafa Day and the 28th anniversary of Falun Dafa’s public introduction, as well as the birthday of its founder, Mr. Li Hongzhi. Practitioners in San Francisco honored the occasion with a small event in front of the iconic City Hall. 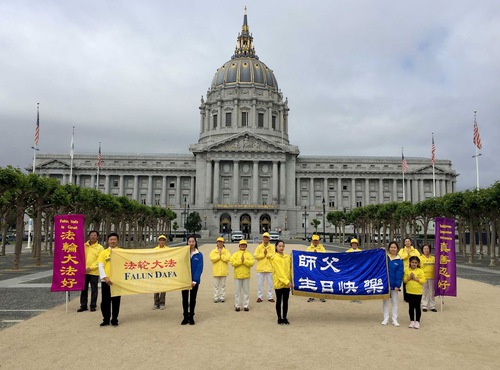 Yuping Li, 81 years old, attended Master Li’s lecture in Guangzhou in October 1993. She has practiced Falun Dafa for 28 years and said she is grateful to Master Li for giving her a second life. 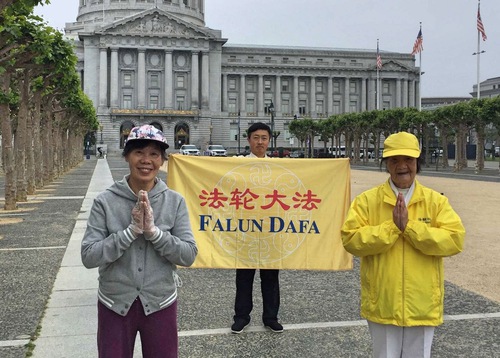 After the Chinese Communist Party (CCP) began to persecute Falun Dafa in July 1999, Ms. Li has gone to Chinatown in San Francisco to tell people her own experience with Falun Dafa in contrast with CCP propaganda amid the persecution in China. 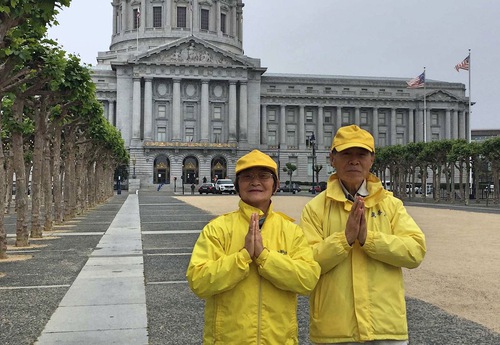 Mr. Lou was a senior engineer before he retired. In 1996, a friend suggested that he try practicing Falun Dafa. “As soon as I started practicing, I was amazed,” Mr. Lou recalled. “The first time I did the exercises, my tinnitus that troubled me for a long time disappeared.

“I studied the Fa and did the exercises. I ate and slept well. I became energetic and easygoing. People teased me and said I was like a young man. Actually, I was 54. I'm 78 now, and I'm still healthy.”

Mr. Lou said that as he continues to read Zhuan Falun, the main book of Falun Dafa, his character keeps improving. He looks within for shortcomings when conflicts surface and eliminates his attachments. His work and home life became harmonious.

Impressed by his changes, his wife, daughter and son-in-law all started practicing the spiritual belief.

“Due to the large number of practitioners, the CCP feared losing control,” said Mr. Lou. “It started the brutal persecution in 1999. We lost our cultivation environment.

“I’m so grateful that we live in freedom in this country, so I want to have more Chinese people know the truth and not be misled by the CCP’s lies. That’s why I volunteer to go to City Hall to advise Chinese tourists to quit their memberships in the CCP.”

“We’re here to celebrate World Falun Dafa Day and wish Master a happy birthday today. I'm excited and so grateful to Master. Happy birthday, Master! We will move forward diligently in cultivation and let more people know about the persecution.”