(Minghui.org) Before World Falun Dafa Day, May 13, 2020, Falun Dafa practitioners in Ottawa shared their stories and talked about how they began practicing. On this special day, they wished to express their sincere thanks and gratitude to Master, and wish Master a Happy Birthday. 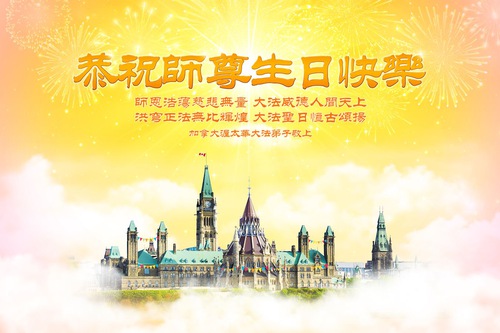 The president of the Canadian Falun Dafa Association, Mr. Li Xun, recalled the day Master Li Hongzhi came to Ottawa and taught the Fa at the conference on May 19, 2001.

“Dafa disciples are magnificent, because what you are cultivating is the ultimate Great Fa of the cosmos, because you have validated Dafa with righteous thoughts, and because you have not fallen during the massive tribulation.” (“The Disciples' Magnificence,” Essentials for Further Advancement II)

Mr. Li Xun said, “I was moved beyond words when I read this. At the time, the persecution of Falun Dafa was intense so this article was a huge encouragement from Master.”

Mr. Li Xun also remembered Master arriving at the conference venue around midday and that he spoke for 20 minutes. Practitioners were happily surprised and many of them were moved to tears. Several said they could feel the strong energy field while Master spoke. Many practitioners from all over the world came to celebrate World Falun Dafa Day. Both the Associated Press and CNN reported that Master attended the Fa conference in Ottawa.

Engineer: Master Saw Me Through My Darkest Days

Mr. Wang Yang is an engineer and a key employee at a well-known software company. He became interested in traditional values when he was young and studied Buddhism, Taoism, and Confucianism. In May 1998 his uncle told him about Falun Dafa. Many of his questions were answered by reading Falun Dafa's teachings. He was moved by Dafa’s profound principles and began practicing.

Mr. Wang, who has now practiced for more than 20 years, said, “Master’s Fa seems easy to understand but always unveils another layer of meaning every time you read it.”

When the persecution began 20 years ago, like many other practitioners in China, Mr. Wang felt lost. During a really tough time, another practitioner he ran into encouraged him to be firm and continue cultivating.

Mr. Wang said he was illegally detained in a forced labor camp in Bai Miao, Zhengzhou Province, where he was tortured by the CCP (Chinese Communist Party). He said, “I was walking down the hallway in the camp, when a man going the other direction quietly said, ‘Don’t ever renounce your belief!’ That really encouraged me. From this chance encounter, I knew other practitioners were being held there, too. That practitioner’s encouragement strengthened my resolve and my belief in Falun Dafa.

“Practitioners are one body. Every word of encouragement is truly touching. After I was released from the labor camp I learned that the Minghui website reported my case. A classmate told me that he learned what had happened to me from reading the reports on Minghui.” Mr. Wang said that he is grateful to benevolent Master and treasures this cultivation opportunity.

Wang Haotian is 15 years old and was born into a family of Falun Dafa practitioners. He began practicing the exercises when he was four years old. When he was able to talk, he began reciting Hong Yin and Zhuan Falun. The guiding principles, “Truthfulness-Compassion-Forbearance,” have always been rooted in his heart. Whenever he encounters a problem at school, he uses the principles to resolve it and he looks inward.

When the CCP detained his parents for practicing Falun Dafa, Haotian had to live with his relatives. His studies were affected and his grades fell. He said he felt frightened and lonely but remained firm in his belief that Falun Dafa is righteous. Whenever he met with a tribulation, he thought about Master, sent righteous thoughts, and silently recited, “Falun Dafa is good.” Even during the most challenging situations, he was always fine. This year, under Master’s protection, Haotian and his family moved to Canada.

He treasures the peaceful environment in Canada and joined other practitioners to clarify the truth. At soccer practice one day, a friend tripped him. He fell hard, couldn’t get up, and thought he had broken a bone. His classmates were startled. He immediately corrected his thoughts and remembered he was a practitioner and that he was fine. He silently said, “Falun Dafa is good. Truthfulness-Compassion-Forbearance is good.” After a while he was able to stand up and was fine.

In honor of World Falun Dafa Day, he wanted to say, “Thank you, Master, for constantly enlightening me and upgrading me during tribulations. I’ve been safe in dangerous situations. I wish Master a Happy Birthday!”

Ms. Pu Huailin Pu moved to Canada 38 years ago. When she was 50 years old, her business was in crisis and the stress triggered an inflammatory disease called lupus erythematosus. The pain sometimes left her writing on the floor. She tried many things—Western and Eastern medicine, and even going to churches and Buddhist temples—but nothing helped. Instead, her illness worsened.

On April 25, 1999, she saw on the news that many Falun Dafa practitioners went to the Central Petition Office in Beijing to appeal for the right to practice their faith. That June, she read an article about how a practitioner recovered after a severe car accident.

The article gave her hope. She immediately contacted the practitioner in the article and he taught her the exercises and gave her a copy of Zhuan Falun. When she started to read it for the first time, she was immediately immersed in it.

She said that, after she read Zhuan Falun, many of her questions were answered and she also understood why people get ill. She was determined to practice Falun Dafa.

She went to the local practice site every morning and read Zhuan Falun when she got home. When she went for a checkup three months later, her doctor said that she was perfectly healthy. Ms. Pu told him, “It’s because I’ve begun practicing Falun Dafa. My terminal illness is resolved!”

Ms. Pu said she knows Master gave her a new life. She’s been diligently practicing for nearly 21 years. Studying the Fa and practicing the exercises have been an important part of her life. She expressed her sincere gratitude to benevolent Master and wishes Master a Happy Birthday.