(Minghui.org) May 13 was the 28th anniversary of Falun Dafa’s public introduction and the 21st World Falun Dafa Day. Mayor Kim Norton of the City of Rochester, Minnesota proclaims the week of May 13, 2020, as Falun Dafa Week in the city honoring Truth-Compassion-Tolerance. 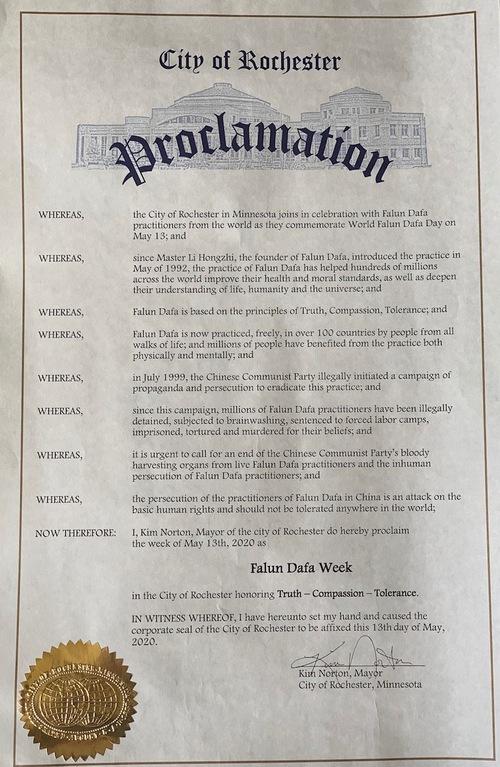 Proclamation from Mayor Kim Norton of the City of Rochester

“Falun Dafa is now practiced, freely, in over 100 countries by people from all walks of life;” the Proclamation reads, “and millions of people have benefited from the practice both physically and mentally.”

“In July 1999, the Chinese Communist Party illegally initiated a campaign of propaganda and persecution to eradicate this practice;”

“Since this campaign, millions of Falun Dafa practitioners have been illegally detained, subjected to brainwashing, sentenced to forced labor camps, imprisoned, tortured and murdered for their beliefs.”

“The persecution of the practitioners of Falun Dafa in China is an attack on basic human rights and should not be tolerated anywhere in the world.”