Sweden: Grateful for a Second Chance

(Minghui.org) Ms. Elisabeth Ek said, “It has been so many years. I never thought of beginning to cultivate again. I even believed it to be impossible. It seemed like I already missed the last train … I felt unworthy of returning to cultivation.”

She continued, “After I left Falun Dafa, also called Falun Gong, cultivation more than 10 years ago, I returned to cultivation.”

She is grateful that Master Li Hongzhi (the founder) had not given up on her. She hopes that her story can awaken people’s conscience, begin to treasure Falun Dafa, and not to be deceived by the lies from the Chinese Communist Party (CCP). 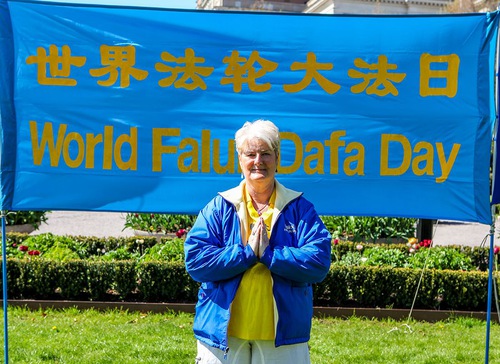 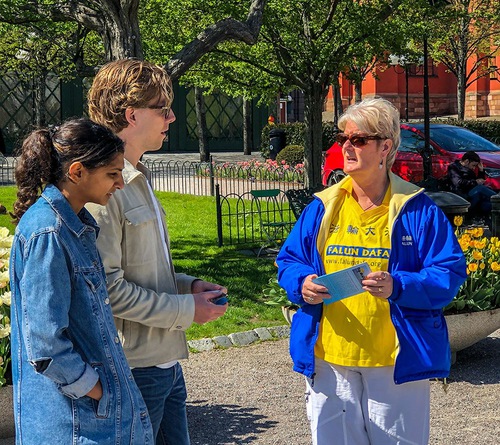 Ms. Ek participated in the seven-day Falun Dafa workshop that was also taught by Master Li in Gothenburg, Sweden in 1996.

As Ms. Ek recalled her emotions at the time, she smiled: “It was wonderful! The amazing feeling was deeply embedded in my memory. I won't ever forget it. Dafa is a pure land. This is the path I have been looking for.”

Unfortunately, five years into practicing Falun Dafa, issues at home interfered with Ms. Ek’s cultivation. She could not align her actions with the Fa. Cultivation became difficult to the point that she had to stop practicing.

“It was not Dafa’s fault,” she said. “I deviated from Dafa, which made it difficult to be motivated. Especially after the CCP started persecuting Falun Gong in 1999, the expectation of practitioners went up. I knew the great responsibility we had to shoulder. However, I saw myself as a not-so-good practitioner, and I was unable to sort out my internal struggle of wanting to do something, but could not. The easiest solution was not to cultivate. I told myself that having Dafa in my memory was good enough.”

She continued, “Actually, my heart was never at ease after I left Dafa. I always knew that it was precious. My true self wanted Dafa. I was ashamed to give it up so easily. My heart never left Dafa … I thought about it almost every day. Whenever I met my friend who is a practitioner, I would bring up the topic of Falun Dafa.”

Master Always Watched Over Me

Ms. Ek and her good friend saw the Shen Yun Performing Arts show in London in 2018. She was quite shaken from the moment the curtain was drawn. Her body felt cleansed.

Ms. Ek also found out about Master’s new introductory article, “On Dafa”. She could not stop crying as she read it.

Her friend said to her: “Let’s start again.”

Those words touched Ms. Ek’s heart. She had been wanting to go back to cultivation, to be a Dafa practitioner again.

Ms. Ek brought up this conversation later with her friend. Her friend had no recollection of saying those words.

“I finally knew, Master Li has always been watching over me. He was waiting for my return.”

Back Pain Went Away

Ms. Ek went on a ski trip to France a few months later. She had been suffering from nerve pain, and had a herniated disk for a few years. Laying on her side or sitting could cause unbearable pain.

During the trip, Ms. Ek was unable to sit on the ski lift. So, instead of skiing, she decided to do the Falun Dafa exercises at the hotel.

“I did the fifth set of exercise leaning on the edge of the bed, I wasn’t able to sit crossed-legged anymore.”

Holding back tears, Ms. Ek recollected. “Amazingly, after I finished the exercise, all the pain in my body had disappeared! I was sleeping on both of my sides that night, and took the ski lift the next day. I experienced Master’s compassion and power again in my own body.”

Being a Diligent Practitioner

Life changed after Ms. Ek returned to cultivation. She is reading Zhuan Falun, the guiding book of Falun Dafa again, and does the exercises daily.

Ms. Ek joined her local Fa-study group, and is involved in activities that spread the goodness of Dafa. With her fellow practitioners, she demonstrates the Falun Dafa exercises, and informs the public about the persecution of this cultivation practice in China

“Master Li’s words sometimes appeared to me like pictures. Those images are beyond what words can express. They help me pick out the thoughts that are not from my true self. The thought of shame and unworthiness are things in the past. Even though I am not always perfect, but, I will keep on going forward. I am grateful that Master had not given up on me, and grateful to Dafa. I will treasure Dafa evermore, and live up to what Master has given us.” 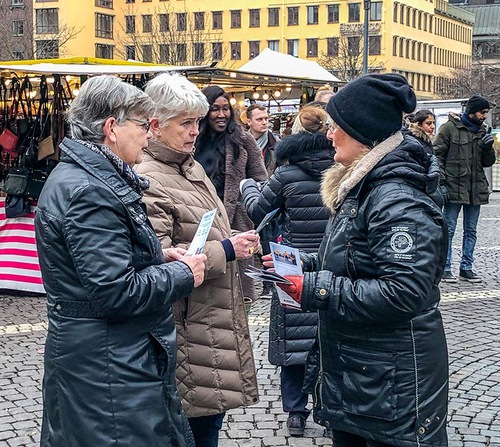 Ms. Ek (first on the right) talking about the persecution of Falun Dafa in China 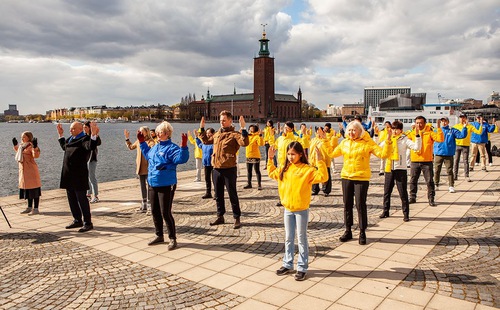