(Minghui.org) Twenty-one years ago, on April 25, 1999, over ten thousand Falun Gong practitioners gathered in Beijing for a peaceful appeal. The sheer number of those gathered, and the calmness and dignity that they displayed moved the entire world. That spirit of peace and rationality has inspired many people to start practicing Falun Gong and is also reflected in practitioners’ continuous efforts to help others understand Falun Gong and the ongoing persecution in China.

The Peaceful, Rational Appeal Brought Many Taiwanese to Falun Gong

When the practitioners left, there was not a single scrap of paper left on the ground. Even the cigarette butts that the police officers had thrown away were picked up, placed in trash bags that practitioners brought with them, and taken away. Pointing at the clean street, a police officer said to some bystanders, “What is virtue? This is virtue!” 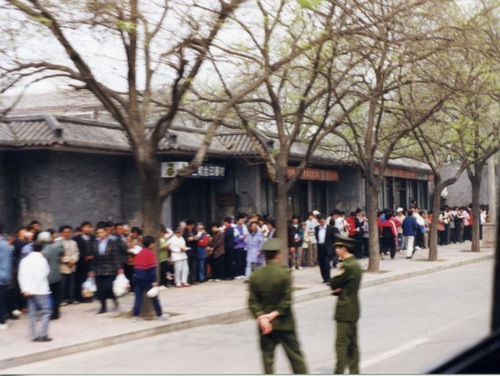 Over ten thousand Falun Gong practitioners gathered on April 25, 1999, to peacefully appeal to the Chinese government.

The event made many people curious about Falun Gong and some even took up the practice themselves.

Ms. Guan Yuzhen, then 48, of Pingdong City, Taiwan, was one of them. After watching the morning news on TV, she wondered, “How could so many people just stand on the sidewalk so quietly, some doing exercises and some reading books? How could they be so calm and peaceful?” The next day she picked up her phone and called a Falun Gong practitioner, who volunteered to teach the exercises. She then started practicing Falun Gong.

The April 25 appeal had put Falun Gong on the international stage. Many others in Taiwan learned about Falun Gong that day and started to practice it not long after.

Telling People the Truth about Falun Gong Peacefully and Rationally

However, the Chinese Communist Party (CCP), under then-leader Jiang Zemin, launched a persecution of Falun Gong just a few months after the group appeal, on July 20, 1999. The persecution is still going on today.

But Falun Gong practitioners have not given up their belief. Instead, inspired by the spirit of the April 25 appeal, they have found many ways to calmly and rationally tell people the facts about Falun Gong and the CCP.

Mr. Wan Yunlin of Taoyuan City, Taiwan, has practiced Falun Gong for over 21 years. He used to play the stock market and ended up with digestive problems, body aches, and breathing difficulty while he slept. After practicing Falun Gong, all his ailments were gone. He completely changed his attitude about how to deal with people, and he lives by Falun Gong's principles of Truthfulness, Compassion, and Forbearance. His family supports his practice wholeheartedly.

Mr. Wan has telephoned many people in China to tell them about Falun Gong and urge them to cut their ties with the CCP.

He once called a man in Xinjiang who agreed to quit the CCP. The man then asked for his phone number. Two days later, the man called Mr. Wan—he had gathered the names of about 20 of his friends, all of whom wanted to quit the CCP.

After listening to Mr. Wan, the manager of a village asked him to call back in an hour. During that hour, the manager called a village meeting and told everyone what he’d heard. When Mr. Wan called back, over 200 people wanted to quit the CCP and its affiliated organizations.

Vietnamese Practitioner Learned Chinese to Explain the Truth to Chinese

A’xiu is from Vietnam. She has an MBA degree and a good job, but suffered from stress. In 2015, her friend sent her a link to the Vietnamese version of Zhuan Falun, the main teaching of Falun Gong. “I just kept reading it all that day,” A’xiu said. “It felt so good!” She started practicing Falun Gong.

She moved to Taiwan in 2019 to study Chinese, so that she could better understand Falun Gong and to escape her old environment, which was filled with Communist Party culture.

Wanting to call people in China, she asked Taiwanese practitioners to write scripts for her and she wrote Vietnamese phonetics next to the Chinese characters. Then she practiced speaking the Chinese.

On her calls to China, A’xiu says slowly in Chinese, “Hello! I’m Lishixiu, a foreigner learning Chinese. Would you please talk to me for a few minutes?”

Most people who pick up agree.

Then she brings up the coronavirus and asks if the person is okay before explaining that the pandemic is not just a natural disaster, that the CCP is behind it. She encourages the listener to quit the CCP and seek Heaven’s protection. The person usually agrees.

A’xiu has helped three people quit the CCP in just a few days.