(Minghui.org) Falun Dafa practitioners in southern Taiwan celebrated the upcoming 21st World Falun Dafa Day, and their Master’s 69th birthday, which is on May 13, 2020. They demonstrated the five sets of health-improving exercises in Kaohsiung Park, and the National Kaohsiung Center for the Arts, on March 3, 2020. After the exercise demonstrations, the practitioners posed for photographs to wish the founder of Falun Dafa, Master Li Hongzhi, a happy birthday.

Falun Dafa, is a mind and body improvement cultivation system based on the principles of Truthfulness, Compassion, Forbearance. It was first taught in China in 1992 and later gained popularity throughout the world. The communist regime launched the persecution of this spiritual practice in July 1999, causing many deaths and imprisonments of practitioners in China. 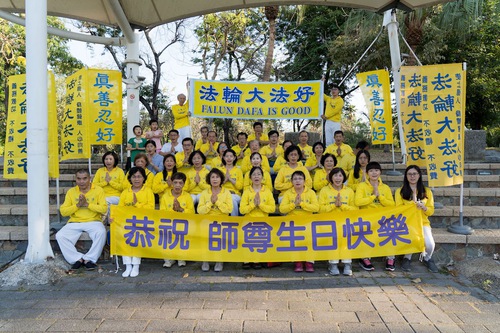 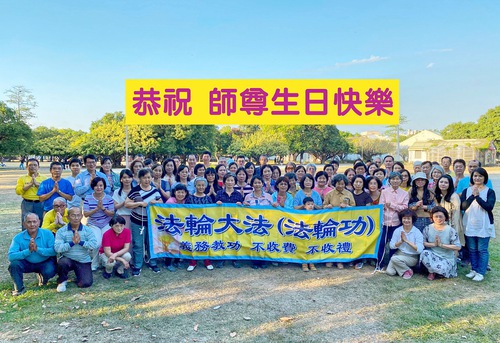 Falun Dafa practitioners in Kaohsiung wish Master Li Hongzhi a happy birthday at Kaohsiung Park and the National Kaohsiung Center for the Arts, on March 3, 2020.

The relaxing music and practitioners doing the exercises drew the attention of many passersby. Many of them learned about the health benefits of the practice and the ongoing persecution of it in China. 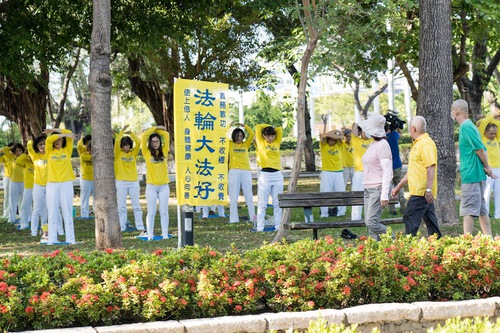 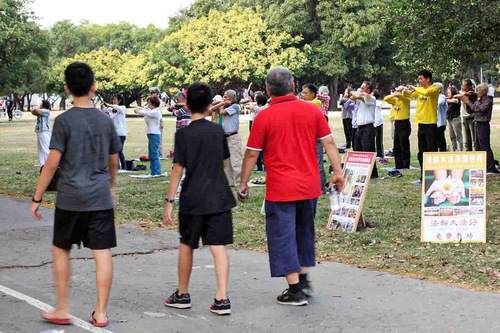 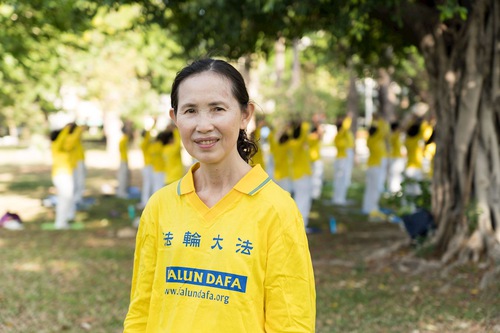 Ms. Hsiao is a retired government employee. She became healthy and optimistic after studying and following the teachings of Falun Dafa.

Ms. Hsiao retired from working at a public school. Years ago her health deteriorated because of her heavy workload. She had to wake up at 4:00 a.m. to operate a breakfast shop before heading to school and teach. After work, she rushed home to cook and do house chores.

Her nasal congestion had prevented her from sleeping well, as the medicine that doctors prescribed didn’t help.

“My sister-in-law had insomnia and dark circles around her eyes. They disappeared suddenly. After that, she introduced Falun Dafa to me,” said Ms. Hsiao.

As she read the main book of the teachings, Zhuan Falun, her nasal problems gradually disappeared, and she could sleep well. She became healthy, energetic, and had a smile on her face. Her coworkers joked, “You have taken a magic pill!”

Ms. Hsiao also became optimistic and was able to let go of many things that brought her misery. Following the teachings in Zhuan Falun, she said, “I was able to look for my own problems and be considerate of others.”

One time her neighbor talked to her about temporarily taking up some of her space on her property during construction, and she quickly agreed. Her mother-in-law felt disrespected and offended because she did not consult with her. “I realized that I had done something wrong because of my attachments. I talked to my mother-in-law about it, and she smiled as if nothing had happened,” said Ms. Hsiao. Their relationship has improved since. 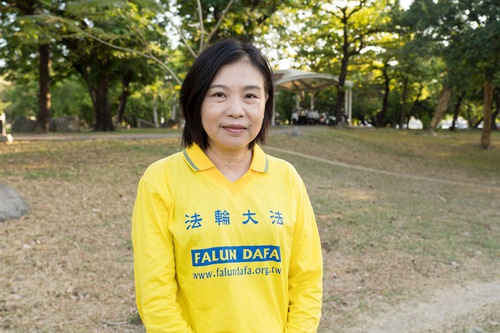 After Fengchen had children, she came down with all sorts of gynecological diseases. Her menstrual pain was so severe that she had to take a lot of painkillers. She decided to practice Falun Dafa, after which she experienced less pain. For a while she continued on painkillers. The pain sometimes came back. She later remembered the teachings regarding illnesses and stopped taking the painkillers. Her menstrual pain never recurred again 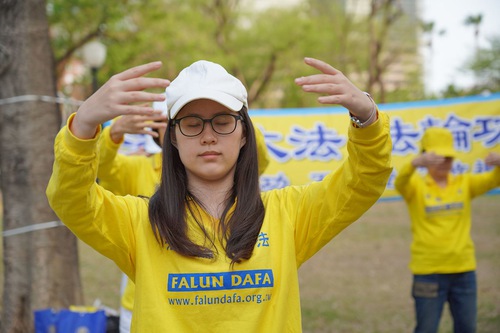 Lingyu practiced Falun Dafa with her mother from when she was four years old. “I wasn’t quite sure what cultivation was at the time. I just knew that I had to be a good person by following the principles of Truthfulness-Compassion-Forbearance. I got along with everyone,” she said. Once in high school, when she met other practitioners her age, she realized that she had to improve on her cultivation path.

Lingyu joined the Falun Dafa Club and improved her character after studying the teachings diligently during her four years in college. After she got her degree in electrical engineering, she accepted a job as an engineer in an international shipping company. It was too much work for her, stressing her out constantly. She realized that she had slacked off in her cultivation. As she started to diligently study the teachings and did the exercises, she found herself becoming more energetic, efficient and no longer found her work challenging.

Huiling worked at a cosmetics company. She sought a spiritual belief years ago after a family tragedy. A coworker introduced Falun Dafa to her. Having to take care of her children by herself, she practiced at home alone after she attended the Falun Dafa introductory classes. One day she forgot the movements of the exercises and decided to attend the introductory classes again. She then found that she had not made the progress as she had hoped. From then on she regularly exercised and studied the Dafa teachings with other practitioners.

Huiling became a positive-thinker after she picked up Falun Dafa. Her children told her, “You are often in a good mood now. We support your practice.” She liked to share her improvement stories in the practice with friends and relatives.

“Cultivation Experience of a Young Practitioner Born in the 90s”