(Minghui.org) The State Council Information Office in China released a white paper titled “Development of China’s Public Health as an Essential Element of Human Rights” on September 29, 2017. The white paper stated, “China set up the world’s largest online direct reporting system of notifiable epidemics and public health emergencies in 2015, and the average reporting time has been shortened from five days before the introduction of the system to four hours.”

This begs the question of why the ongoing coronavirus pandemic wasn't publicly acknowledged by the Chinese Communist Party's top leaders until more than a month after it broke out in Wuhan late last year. Interestingly, two epidemic response drills were held shortly before the outbreak, in July 2019 and September 2019, respectively, with the second drill taking place in Wuhan.

Why did the direct reporting system and drills fail to achieve their purpose of quickly alerting people to public health crises? One of the reasons is that many of the things done by the CCP are just to put on a political show. As such, when crises actually strike, CCP officials are often ordered to prioritize the CCP’s political agenda over the well-being of the Chinese people. In order to maintain its power, the Party turns to censorship and deceit.

A recent document received by Minghui.org reveals that China’s National Health Commission had issued orders to destroy coronavirus samples and prohibited related discussions during the crisis. 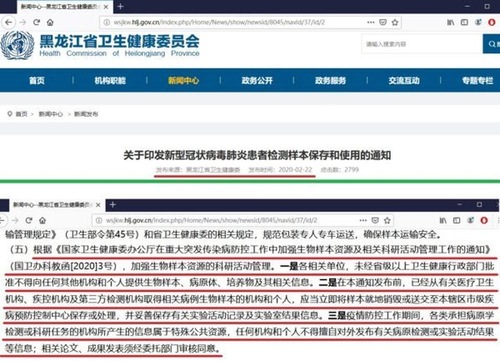 The above announcement issued by the Heilongjiang Province Health Commission cited a notice from the National Health Commission (Document 2020 No. 3), which said biological samples should be managed in the following way:

1) No institutions are allowed to provide biological samples, pathogens, cultures or related information to any organizations or individuals unless it is authorized by provincial-level or higher health commissions.

2) Institutions or individuals who had obtained biological samples from medical facilities or local CDC agencies prior to this announcement should immediately destroy the samples or submit them to city-level CDC offices.

These three points were consistent with how Wuhan and Hubei officials covered up coronavirus cases, suggesting that they are part of a nationwide policy from top CCP leaders disseminated through all levels of health departments. Based on these requirements, diagnosis and reporting of the coronavirus cases require provincial-level approval.

The abovementioned policy helps explain why the numbers of confirmed cases and deaths are relatively low in China. There have also been reports that coronavirus patients were either recategorized as having other illnesses or simply unreported.

Differentiating the Communist Party from the Country of China

China is ruled by the CCP, which penetrates all levels of government agencies and state-owned enterprises. The official coronavirus data are gathered and reported by CCP officials at every government level.

At each level, the Party secretary ranks higher than the administrative head at that level. Therefore, the CCP has the final say over public health and many other critical policy issues. In the case of the coronavirus pandemic, the CCP is most concerned about maintaining its own power and reputation.

The atheist CCP thrives on violence and deception. In no way does its ideology represent the traditional Chinese culture that has defined China for over 5,000 years. As a result of the CCP's decades of indoctrination, however, many Chinese people often mistakenly equate the CCP to China.

CCP: A Wolf in Sheep's Clothing

As the pandemic unfolded in the past few months, many people have learned how the CCP covered up the outbreak. But these tactics are not new. In fact, the regime has been deceiving people since it came to power several decades ago—claiming to serve the people but harming whoever interacts with it.

Such practices go back to the origin of the communist party. Scholars have found that communism was derived from the Illuminati, a secret satanic society launched in 1776 in present-day Germany. Its associated organization, the Fabian Society, had a logo of a wolf in sheep's clothing.

The CCP's deceptive nature is similar to a story depicted in ancient Chinese literature. “The Painted Skin” is a story written in Liaozhai Zhiji (Strange Tales from a Chinese Studio) by Pu Songling.

The story was about a young scholar named Wang Sheng who met a beautiful young woman. Wang took her home and lived with her. One day, Wang found her door locked, so he peeked through the window. Inside the room, a ghost was painting a human skin; upon finishing, she put it on and changed back into the woman. Later on, the ghost killed the scholar and ate his heart.

“How silly it is!” Pu wrote at the end of the story. “People sometimes mistake a ghost for a beauty and dismiss wisdom as nonsense... The cause-effect relation exists throughout history—just some people are too foolish to know it.”

After suffering so much from the coronavirus pandemic, I hope many people will learn the lesson and not be fooled by the CCP again.