(Minghui.org) On April 25, 1999, a peaceful appeal in Beijing surprised the Chinese leadership and the international community, when 10,000 Falun Gong practitioners gathered near the State Council Appeals Office to request the release of fellow practitioners who had been illegally arrested for their belief.

The CCP is still persecuting Falun Gong practitioners 21 years later. Yet, Falun Gong practitioners are not the only victims of the CCP's suppression of freedom of belief and freedom of speech in its attempt to rid whatever the Party perceives as threats and to maintain power. The CCP's cover-up of coronavirus information has seen whistleblowers punished and has resulted in nearly 3 million people infected and close to 200,000 deaths worldwide.

On the 21st anniversary of the April 25th Peaceful Appeal, it is important to realize that only by distancing ourselves from the CCP can we have our human rights restored and stay safe in the face of disasters.

Two days before the April 25th appeal, dozens of Falun Gong practitioners were arrested in Tianjin, a provincial-level city near Beijing, for voicing their opinions against propaganda defaming Falun Gong. As more practitioners went to request their release, they were told to go to Beijing since the order to arrest came from the central government. 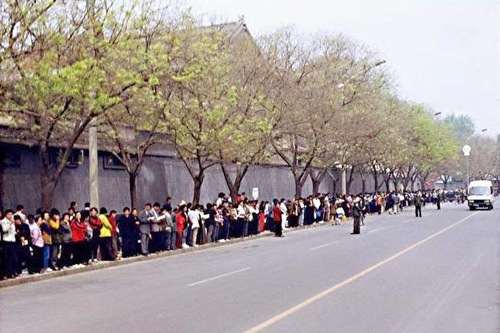 Peaceful appeal by Falun Gong practitioners in Beijing on April 25, 1999

To help higher officials understand the facts of Falun Gong, about 10,000 practitioners voluntarily gathered outside the State Council Appeals Office in Beijing on April 25, 1999. They raised three requests: release the detained Tianjin practitioners, restore practitioners' freedom to practice Falun Gong without intervention or repercussions, and lift the ban on publication of Falun Gong books.

The then Chinese premier met with representatives of practitioners and approved all of the requests—in fact, each of the requests were basic rights guaranteed by the Chinese Constitution.

Three months later, however, Jiang Zemin ordered the persecution of Falun Gong. Since then, tens of millions practitioners have been targeted for upholding their faith. Many of them have been detained, imprisoned, and tortured for their belief.

Some people have attributed the persecution to the peaceful appeal on April 25, 1999, but the real reason was that Falun Gong’s principles of Truthfulness-Compassion-Forbearance fundamentally contradict the CCP’s atheism and ideology of struggle. Even before the appeal, Jiang’s followers had been investigating Falun Gong hoping to find excuses to suppress the peaceful practice. Without the April 25th Appeal, Jiang and the CCP would still have found excuses to persecute Falun Gong. The arrests of the Tianjin practitioners and the ban of Falun Gong books before the appeal attested to Jiang's intent to persecute Falun Gong.

The CCP's persecution of Falun Gong is not the only example of its suppression of freedom of belief and freedom of speech. The ongoing coronavirus pandemic has further shown Chinese people and the rest of the world how the CCP's censoring of information and speech has turned an epidemic into a global crisis.

While there were a few whistleblowers who tried to expose the CCP's cover-up of the outbreak, their voice was soon drowned out by the government propaganda and many people remained silent in the face of the CCP's tyranny.

Falun Gong practitioners, on the other hand, have never stopped their efforts to raise awareness of the persecution of their faith over the past 21 years. After the coronavirus broke out, practitioners have also been working hard to inform the public that the CCP has been using the same cover-up and deceit tactics all along, from its cover-up of the 2003 SARS epidemic and the ongoing pandemic to its persecution of Falun Gong.

The CCP will do everything to maintain its power, and it does not care about people. It is safe to say that the system of the CCP itself is the root cause of the disasters it propagates.

After the CCP covered up the SARS epidemic in 2003, a series of policies were put in place to prevent similar crises. In 2017, China claimed it has established the largest integrated public health emergency reporting system, which would reduce the reporting time from four days to four hours.

In July 2019, a rehearsal was conducted with over 8,200 participants from 31 provinces and provincial-level cities. The purpose was to practice how to handle a virus outbreak some time in 2020.

Three months later, on December 18, Wuhan Central Hospital admitted its first coronavirus patient. Several days later, medical professionals identified the coronavirus epidemic. But their efforts to report the emergency were blocked. When they had no choice but to raise awareness of the growing epidemic through social media, they were punished by the authorities.

More than 40,000 people from about 10,000 families in Wuhan attended a mandatory Chinese New Year banquet on January 18, 2020, despite calls from some residents to cancel the event upon learning of the epidemic. As a result, Baibuting community, where the feast took place, became one of the hardest-hit areas in Wuhan.

It is apparent that the public health emergency reporting system and the drills were just paying lip service to organization when the CCP deemed it more important to create the illusion that everything was under control, especially around sensitive dates such as national holidays. As more and more people became infected after the Baibuting community banquet, the CCP put the entire city of Wuhan under lockdown on January 23.

Time to Distance from the CCP

One would think the CCP would learn lessons from one man-made disaster to another, but time and again it repeats the same mistakes in its handling of various crises. When politics overrides science and when political agendas supersede conscience, nothing will ever prevent the CCP from causing calamities again.

The CCP has caused more than 100 million unnatural deaths in China since it took power several decades ago. Each time a political movement ends, the CCP finds an excuse or scapegoat to deflect blame. People then continue their wishful thinking, only to be struck by harsh reality again and again.

Falun Gong practitioners appealed to the government 21 years ago for freedom of belief and speech. They are still standing strong today, calling for an end to the persecution. As China and the rest of the world are suffering tremendous damage from the CCP's cover-up of the coronavirus outbreak, it is imperative to have information transparency. To that end, we may want to take a cue from Falun Gong practitioners who have never stopped their quest for freedom of belief and freedom of speech. And now is the time to distance from the CCP in order to ensure our future safety.