(Minghui.org) Falun Gong practitioners in Yilan, Taiwan gathered on April 19, 2020 to celebrate the benefits of this mind and body cultivation practice, and commemorate the peaceful protest in China 21 years ago.

The practitioners had experienced the healing effects of Falun Gong, and wanted to promote the practice. Thus, they demonstrated the five sets of health-promoting exercises in front of the Yilan Cultural Center. 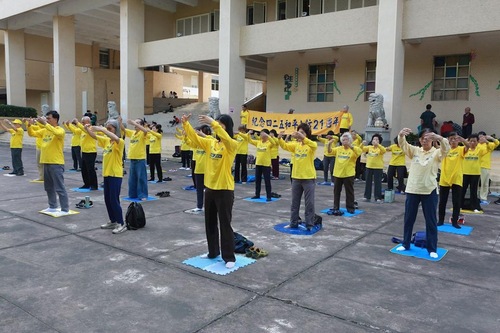 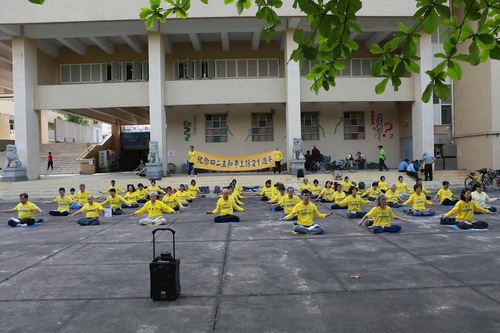 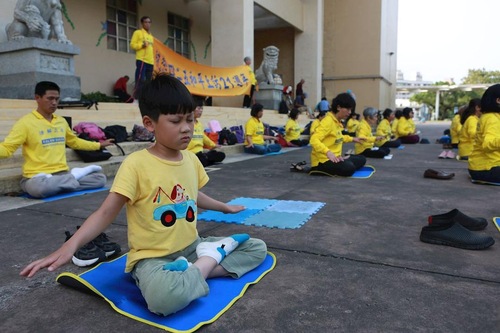 Falun Gong practitioners exercise in front of the Cultural Center on April 19, 2020.

Falun Gong practitioners from around the globe hold commemorative events to remember a Falun Gong historic incident every year around April 25.

Two days before that fateful day in 1999, about 40 Falun Gong practitioners in Tianjin were beaten and arrested by local security forces. This unprecedented violence against the peaceful practice shocked practitioners.

About 10,000 practitioners journeyed from across the country to the Central Appeals Office to make their case on April 25, 1999, and petition for the right to practice Falun Gong. Eventually the then Chinese premier promised to release the practitioners, and ensure a safe environment for them to practice. The practitioners quietly left, leaving the streets and sidewalks where they had stood free of litter, and even cleaned up the cigarette butts left behind by police officers.

Ms. He Laiqin recalled how the practice cured her decade-long migraine. “For 27 years I could barely sleep because of severe headaches. Not a single doctor I consulted could help me. A relative in China suggested that I partake in Master Li's Hongzhi’s lecture in Jinan City in 1994, which I did. Within just a few days the chronic illnesses I had disappeared, and I felt as if I was reborn.”

Mr. Lin Chongqi owns a plastic bag factory. He suffered from insomnia, depression, constipation, and nervous exhaustion. Practicing Falun Gong cured all of his ailments, and his entire family of nine began to cultivate after witnessing the power of Falun Gong.

After becoming a practitioner, Ms. Li Suxing, a dentist, witnessed the healing power of Falun Gong after practitioners recovered from their illnesses. “Many of them no longer showed asthma symptoms, had headaches, kidney disease, heart disease, or bronchitis,” she said, “Not only were they physically well, their personalities and moral levels also improved. They put the needs of their families and work colleagues before their own needs.”

Dr. Chen Guofeng talked about the persecution of Falun Gong in China and asked the public to support their efforts to end the brutality. “In less than three months after the peaceful protest, then Chinese leader Jiang Zemin launched a persecution of the practitioners on July 20, 1999. The authorities detained, brainwashed, and tortured practitioners. At least 4,000 practitioners died as a result of the communists persecution,” he said.

“My Recollection of the April 25th Appeal”