Commemorating April 25: Contrasting Attitudes Toward Falun Gong on Both Sides of the Taiwan Strait

(Minghui.org) Falun Gong, also known as Falun Dafa, was first publicly taught in China in May 1992. Many who took up the practice became much healthier, their moral values improved, and Falun Gong quickly spread all over China by word of mouth.

On April 25, 1999, tens of thousands of practitioners rushed to the State Council's appeals office located near Zhongnanhai on Fuyou Street after learning riot police in Tianjin had beaten and arrested practitioners. Practitioners from all over China came to peacefully appeal for the release of the 45 practitioners who were detained in Tianjin. The premier at that time received a group of practitioners and resolved the matter favorably. The incident ended that night and was later known as the April 25th peaceful appeal. 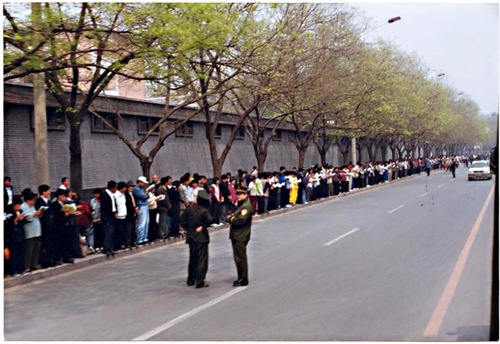 Tens of thousands of Falun Gong practitioners peacefully appeal in Beijing for the release of practitioners detained in Tianjin on April 25, 1999.

The whole process was peaceful. No one shouted any slogans. People went there purely to explain to the government the facts about Falun Gong with the hope that they could secure a safe environment to practice the meditation, and that certain government departments would stop mistreating practitioners. No one made a ruckus nor obstructed traffic. Practitioners stood on the pedestrian paths either reading Falun Dafa books or doing the exercises. After practitioners left, the street was very clean without even a piece of paper left behind. Many people who witnessed the appeal praised the group for their high moral values and saw hope for the future of China.

The next day, newspapers in Taiwan reported the incident extensively. Many people began to search for Falun Gong practice sites in Taiwan. The logic for many Taiwanese people was “if the Chinese Communist Party says it is bad, then this must be good.” Like bamboo shoots emerging after the rain in spring, a lot of people came to practice Falun Gong. Nine-day introductory classes were held all over Taiwan with an average of 70 attendees per class. According to those who volunteered at that time, two televisions were needed in each class to play the lectures. 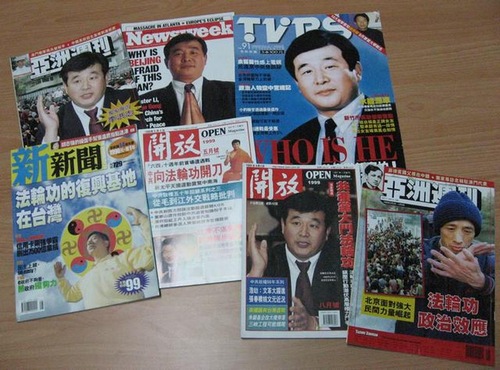 Many people overseas learned about Falun Gong through the April 25 appeal. The power of practitioners' faith and demeanor left a lasting impression on many. Large numbers of people came to the practice and laid the foundation for Falun Gong in Taiwan. 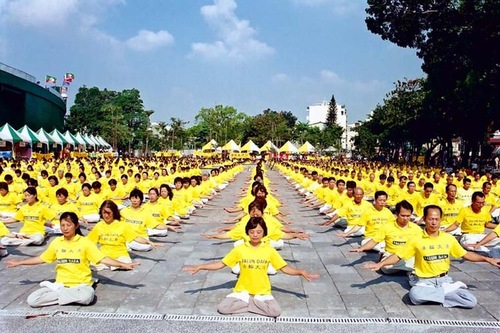 The Tainan City sports committee invited local practitioners for a “thousand people exercise demonstration” during the opening program for a sports festival held on September 25, 2004.

The significant health benefits and improvement of moral values brought about through practicing Falun Gong attracted many people in Taiwan. Falun Gong became a household name just by word of mouth, and 1000 practice sites were established in more than 300 towns and villages on the main island, and on other islands such as Penghu, Jinmen and Matsu. The number of Falun Gong practitioners in Taiwan is now estimated to be in the hundreds of thousands, and Taiwan is home to the world's second largest population of Falun Gong practitioners, after China. 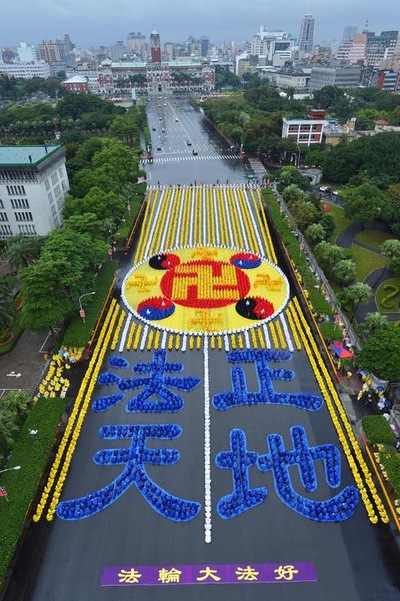 Six thousand practitioners gathered outside the Taiwan Presidential Building on November 17, 2012, to form the characters “Fa Rectifies Heaven and Earth” and the image of a Falun.

The teachings of Falun Gong require practitioners to follow the principles of “Truthfulness-Compassion-Forbearance,” reflect on personal shortcomings in conflicts with others and be considerate towards others at all times. Consequently, there are many examples of practitioners becoming better people at work, experiencing improved relationships at home and getting along harmoniously with their neighbors. 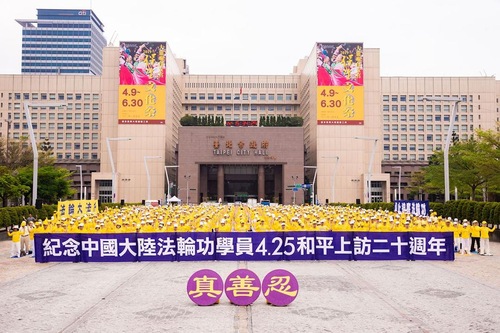 Practitioners in Northern Taiwan held a press conference and did the exercises at the Taipei City Hall Square to commemorate the 20th anniversary of the April 25 appeal on April 21, 2019.

After experiencing the benefits of the practice, many practitioners established Falun Dafa clubs at their workplaces. The Falun Gong society at the Taiwan Superior Court was initiated and approved in mid October 2009. The Taiwan Superior Court joined other Taiwanese government agencies, such as the Bureau of Foreign Trade, Taiwan Customs, the Taoyuan District Prosecutor's Office, and the Keelung City Police Bureau, in having a Falun Gong Society.

Practitioners also often introduce the practice at teachers' workshops, and hundreds of teaching staff attend such workshops. Many principals, education inspectors, supervisors and teachers have become practitioners through these workshops. Falun Gong was selected as one of the health practices to promote in 31 townships and cities throughout the county at the annual Tainan County Health Fitness and Improvement Conference held on March 26, 2009. It was the first plan in Taiwan to promote Falun Gong by a county government and it received much attention. 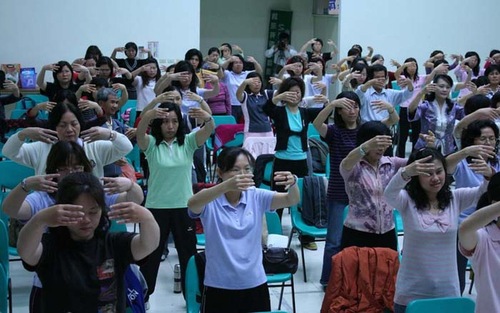 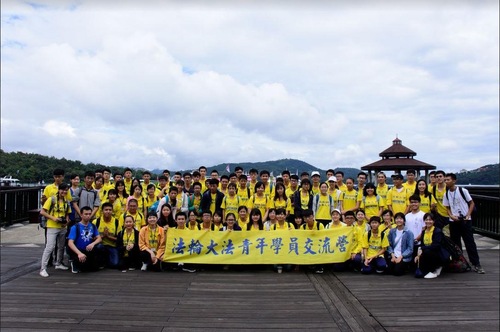 The Falun Dafa youth summer camp was held at the National Chung Cheng University from August 23 to 26, 2018. Participants were from Falun Dafa clubs in more than 20 universities.

Jealous of its popularity, former CCP head Jiang Zemin gave orders for the persecution of Falun Gong in July 1999. The regime concocted lies, such as the self-immolation on Tiananmen Square, to demonize the practice. Practitioners were tortured in many ways including detention, brainwashing, beatings, electric shocks, injected with nerve-damaging drugs, and had their organs removed while they were conscious. To date, at least 4300 deaths have been confirmed, while countless more have been arrested and detained in prisons, labor camps, brainwashing centers, and mental institutions. The brutal suppression has left many paralyzed, forced people to quit school, be fired from their jobs, and forced them to leave home to avoid persecution, resulting in many broken homes. 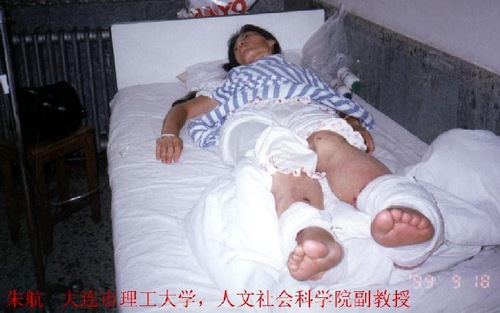 Associate professor Zhu Hang of Dalian Polytechnic University became paralyzed and deranged after he was tortured for practicing Falun Gong. 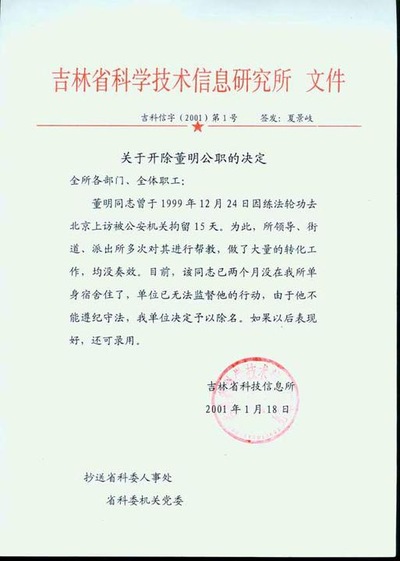 Falun Gong practitioner Dong Ming was fired for refusing to give up Falun Gong. The photo shows an official document from his employer, the Jilin Province Institute of Scientific and Technological Information, notifying him that his wages were being withheld, his employment was terminated, and he had been evicted from the residence provided by his employers.

It is a different scenario for Falun Gong practitioners across the strait in Taiwan who share the same ancestry and culture as China. People from all walks of life–doctors, lawyers, teachers, government officials, students, policemen, businessmen, housewives, and so on have taken up the practice. Falun Dafa is highly respected by all levels of government in Taiwan and supported by local communities. 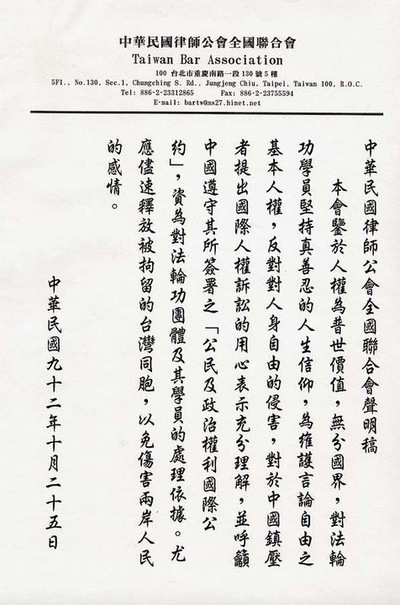 The Taiwan Bar Association issued a statement on October 25, 2003, supporting the lawsuit against Jiang Zemin. 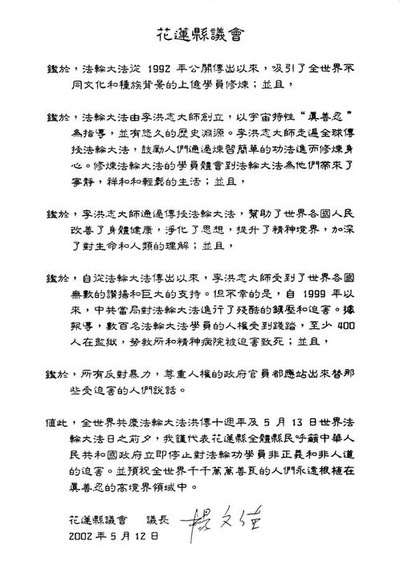 The Hualian County Council issued a statement on May 12, 2002, to congratulate practitioners on the 10th Anniversary of Falun Dafa's introduction to the public.

Falun Gong continues to be persecuted in China. In contrast, the practice caught the attention of Taiwan residents after the April 25 appeal and continues to gain popularity all over the island. The attitude towards the meditation practice is vastly different on both sides of the strait. What they hold in common is that good people on both sides of the strait sincerely hope that the persecution will end soon and hope that people in China will be able to practice Falun Dafa freely.

“Master Is Protecting Disciples at all Times”