(Minghui.org) Falun Gong practitioners have gone to Cultural Park in Chiayi, Taiwan, to do the exercises every Saturday and Sunday for the last few years. After the coronavirus epidemic erupted in China at the end of 2019, practitioners decided to start an additional exercise site at the Renyitan Reservoir in the city's outer suburbs to bring peace and well being to the local people. 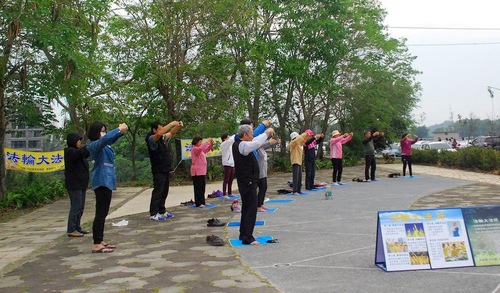 Taiwan has not been greatly affected by the Wuhan coronavirus, despite its geographical proximity to China. Only six people have died from coronavirus in Taiwan to date.

Ms. Lin was giving out Falun Gong flyers beside a group of practitioners who were doing the exercises. She has been practicing Falun Gong for more than 20 years and said the practice had resolved her chronic health issues, including nasal allergies and constipation. It also improved her character.

“I used to have a bad temper. I would get angry when my child didn't listen to me. But after I practiced Falun Gong, I learned to take a step back, go outside to breathe and calm down, and think about where I had not done well in my self-cultivation,” she said.

“Although self-cultivation is not easy, after I accepted the challenge I really had a sense of accomplishment. I came to understand that these situations arise to test my character,” she said.

Ms. Lin said a lot of people had expressed interest in learning Falun Gong recently, but because of the coronavirus epidemic, most of them had been doing the exercises and reading the books at home. However, a woman in her 80s has been coming to the park every Saturday morning to learn the exercises from practitioners. Ms. Lin said the woman has picked up the movements really quickly.

Mr. Lin said he used to have recurring stomach ulcers. After practicing Falun Gong, he started to understand what was truly important in life and adjusted his hectic work schedule. His stomach problem disappeared.

“Practicing Falun Gong improved my immune system. Learning the benefits of Falun Gong and casting aside the CCP will help people choose to stand alongside the righteous and survive this pandemic,” he said.

Mrs. Luo is a retired high-school teacher who practices Falun Gong. She believes there is a connection between epidemics and degenerated morality.

“We come here to tell people that practicing Falun Gong can uplift morality and give you peace of mind during this pandemic,” she said. “The world would be safe and peaceful if all people improved their character.”

Falun Gong practitioner Mr. He said that Taiwan had remained largely unscathed because it never trusted the Chinese Communist Party's (CCP) phony statistics. The world later learned that the CCP had intentionally concealed the severity of the outbreak.

Mr. He said that the CCP has brutally persecuted Falun Gong practitioners in China for the last 21 years. “Understanding the evil nature of the CCP and keeping a distance from it will help keep compassionate people safe during this pandemic,” Mr. He said.

“Verdict Against Liaoning Woman for Her Faith Upheld”