(Minghui.org) Professor Chang Mei-Ying remembers wondering as a child, “Where do we come from, and what's our purpose in life?” She later realized she could seek answers to her questions in books, and her father realized that the best gift to give her was books. Mei-Ying read countless books about everything, from the mysteries of the pyramids and the Bermuda Triangle to literary masterpieces, but each book just increased her curiosity about life and its meaning.

Mei-Ying felt more confused as she conducted scientific research during her university studies.

“It turns out that the elements from the periodic table can be predicted, and there are infinite dimensions in the nano system. This made me think that many things actually exist and there must be a Creator who created everything in the world. But who is he?” Mei-Ying said.

She continued to seek answers through books. Her journey of inquiry took her to America, where she obtained her PhD in chemistry from New York University Tandon School of Engineering. But her questions were still left unanswered. She gradually buried these pursuits in her heart.

In November 2009, Mei-Ying decided to read Zhuan Falun, the main book of Falun Dafa. Her neighbor had suggested she read the book two years before, but Mei-Ying had simply put the book on her bookshelf. After she finally started to read it, she regretted not picking it up sooner. “I spent several hours reading it from cover to cover. All of my questions were answered, and I was amazed,” she recalled.

After reading Zhuan Falun, Mei-Ying's view of life and the world changed. All of her doubts about quantum mechanics were resolved, and she felt as if she understood everything. 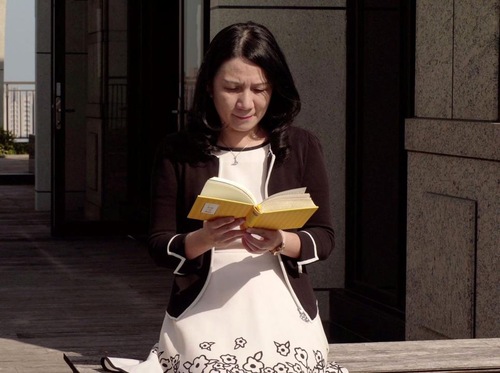 The book Zhuan Falun answered all of the questions Mei-Ying had puzzled over from a young age.

Mei-Ying had studied for several decades and had obtained a doctorate degree, but she felt that these achievements paled in comparison to just a small part of this book. She used to have a habit of buying a pile of books every month and reading them at night until she fell asleep, but for the first time in her life, she was not interested in reading any other books. “In fact, from that day onwards, I never stopped reading Zhuan Falun.”

Zhuan Falun revealed the principles of the universe and the heavenly secrets of cultivation. Mei-Ying was amazed that she had found Falun Dafa. “I had been searching everywhere and then all of a sudden I got it without any effort. I wondered if I was virtuous enough to obtain the teachings. As I closed the book and thought about what was happening, I saw the three characters for “Zhuan Falun” spinning nonstop on the book cover. I thought that my eyes were tired after reading for so long, but when I shut my eyes and opened them again, the characters continued to spin. It was extraordinary!”

Feeling like an elementary school student holding tightly onto a book of heavenly secrets, Mei-Ying put her whole heart into practicing Falun Dafa. She did the exercises and read the teachings diligently. She had many extraordinary experiences.

“In the beginning, I saw many intriguing scenes (in other dimensions), such as practitioners flying up into the sky while doing the sitting meditation. I also felt significant improvement in my health. For instance, every time I sat down to do the meditation, when my arms were stretched out, I could feel a warm sensation beneath my palms, as if a small heater was turned on. In the past my hands and legs were often ice cold. This condition disappeared.”

Other health problems, such as stomach and shoulder pain, also vanished. “While studying for my PhD, my poor posture meant I could only raise my arms up to my shoulders. After returning to Taiwan, the problem worsened and the pain in my shoulders extended to my temples. Even weekly acupuncture sessions did not alleviate the pain, and it affected my work and life. I often wondered if anything could alleviate the pain. But after doing the second set of exercises, Falun Standing Stance, a few times, I could lift my arms above my head. I also used to suffer from terrible stomach pain every once in a while, and I had no choice but to take medication to ease the pain. Soon after I began to practice Falun Dafa, my mother asked why I had not been taking my medication lately. I realized that the problems that had plagued me for so many years had disappeared.” 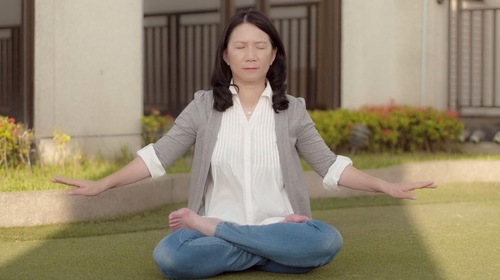 Mei-Ying's body and mind changed tremendously after she took up Falun Dafa.

Practicing Falun Dafa also gave Mei-Ying an improved sense of clarity and increased her wisdom at work. As a professor in the Department of Photonics of National Sun Yat-sen University, she has had remarkable achievements in her scientific research and in industry-university collaborations.

“I submitted many plans to the industry over the years. When I was an associate professor, I once handed in three proposals costing NT$6 million altogether [~USD $200,000]. Unexpectedly, all three proposals were accepted. My co-worker asked in bewilderment, 'Why do you trust Mei-Ying so much?' She was told it was because I say things for the benefit of others and so people trust me.”

Applying the principles of Falun Dafa – Truthfulness, Compassion, and Forbearance – in her attitude toward her work, Mei-Ying works hard and with a sense of responsibility. She is kind and sincere with her students. Her words and behavior have inspired her students to study diligently, and her co-workers to work hard on their projects. Over the years, she has won an outstanding teaching award, an excellent tutor award, and multiple industry and academic achievement awards. She has also registered more than 10 invention patents.

“Falun Dafa has taught me to be selfless and considerate of others. Perhaps I was paid a lot of money to do certain work, but my focus was not on the money. Instead I pay attention to the needs of the other party and even after the partnership is over, I will continue to provide many services for free. I often tell my students, don't worry about fame and personal gain.

“What's interesting is, my co-workers used to tell me I should concentrate on advancing in my career rather than practicing cultivation. But later on, they felt they should learn Falun Dafa with me so they could better guide their students in developing new innovations.”

Mei-Ying and her husband were very impressed by Shen Yun after seeing the performance for the first time. They decided to help promote the performing arts group on a voluntary basis so more people in Taiwan would see the spectacular, inspiring performance.

A week before the first promotional event they were organizing, Mei-Ying's husband suddenly passed away. Her husband had been her university classmate, and they had pursued their post-graduate studies in America together. Recalling everything they had been through over the years, Mei-Ying was overwhelmed by grief. Just as she was on the brink of a breakdown, she recalled Master's words:

“Some students experience all sorts of hardships after taking up Dafa. If you didn't cultivate, those tribulations would lead to your destruction. But precisely because you do cultivate in Dafa, even though the pressure you face is great when the hardships come at you earlier than they would have, and the tests of your xinxing are tough to pass--and sometimes the tests may be huge--when all is said and done, those hardships are all things you need to overcome, they are accounts you need to settle, tabs that you need to pay. (Audience laughs) Aren't they great things, then? So whether it is good things or bad things you run into, so long as you cultivate in Dafa, they are all positive, to be sure.” (“Teaching the Fa in San Francisco, 2005”)

She became determined to look at her situation positively and step out of her grief.

Though she was making funeral arrangements for her husband, she did not stop preparing for the event for Shen Yun. When a coworker asked her how she could find time for such things at such a time, she told him sincerely, “This is very important. My husband and I planned these events together because we hoped that in today's world, where disasters happen with increased regularity, more people could learn to appreciate traditional values and find hope through Shen Yun's performances.” Her coworker was moved by her words and bought tickets to see Shen Yun.

Her husband's body was cremated the night before their first event to promote Shen Yun. Mei-Ying returned home from her day exhausted, but after her family went to sleep, she watched the Shen Yun promotional video repeatedly. She suddenly saw scenes of practitioners reincarnating. In that instant she felt she understood her purpose in life. A thick layer of sentimentality that she had towards her husband was stripped away, and she felt an unprecedented sense of peace. 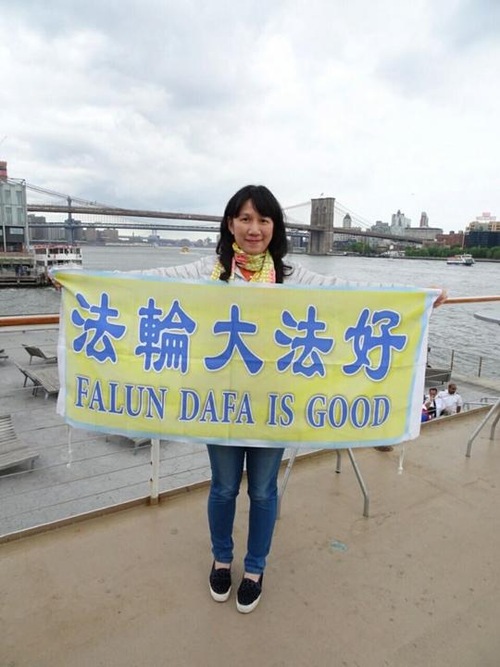 Mei-Ying hopes everyone will realize how wonderful Falun Dafa is.

The event to promote Shen Yun went ahead as planned the next day and it was a success. Mei-Ying wholeheartedly told the guests, “Every one of you came to this world with a mission. Do you know what yours is? When you face unbearable challenges, when you encounter the greatest misfortune in life, you are not defeated. You turn grief into courage and use the strength of life to exert greater strength to help more people.” Her kind words touched everyone and many people bought tickets to see Shen Yun.

“In the past, I had everything people envied in the world: the title of professor, a husband who takes good care of our family, and wonderful children. But when I encountered great misfortune, my children and I found inner peace from the teachings of Falun Dafa. I think this is true happiness.

“Along the way, I have deeply felt Master's compassionate care. This eternal opportunity has surpassed everything I have in the world. I really cherish it very much. I also hope I can do more to help people experience how amazing Falun Dafa is,” Mei-Ying said.

“A CCP Official Renounces the Party”

“The Importance of Truth-Clarification Materials”