The report, which is also available as a television documentary (“Influence from China”) and on Yle's website (“China’s ‘magic weapon’ is also aimed at Finland”), highlighted the secretive operations of multiple pro-CCP groups disguised as Finnish organizations.

“Yle found organizations in Finland that can be traced back to the control machinery of the Chinese Communist Party. Their activities have a connection with Finnish party politics,” wrote the report. “That means the influence from China is repeated the same way from one country to another.” 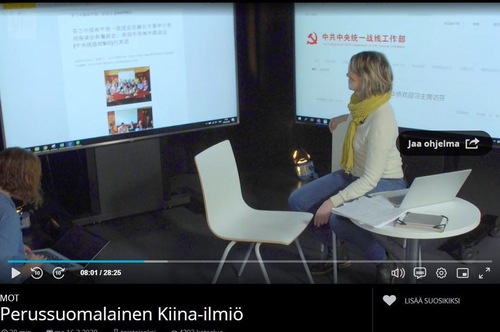 The report said a group of people were often seen meeting at a restaurant in Helsinki, the capital city of Finland. According to information later posted on the website, the discussions this group had are mainly focused on the omnipotence of the Chinese Communist Party (CCP) and their loyalty to it.

This organization is the Finnish Association for the Promotion of Peaceful Reunification of China (FAPPRC), which has about 200 branches worldwide. All of them are strong advocates for the Chinese regime.

“Experts say the organization's goal is to advance China's interests and silence criticism of the emerging superpower,” wrote the report.

Because of their connection with political control in Beijing, Yle investigated the activities of three such organizations and found that two members were also involved in Finnish party politics.

“In fact, these associations affiliated with the Chinese Communist Party often disguise themselves as ordinary NGOs,” states the report.

According to FAPPRC’s website, members of the group gathered to “study [Xi Jinping's speeches] in depth” to keep Chinese ethnicity “strong and prosperous forever” – they also “want the reunification to take place as soon as possible.” One of these members is Jenni Chen-Ye, vice-chairperson and one of the founders

Chen-Ye is also a City Councilor of Vantaa, through which is she is associated with the National Coalition Party. Chen-Ye has not disclosed her association activities in the statutory declaration of interest because she had considered them “irrelevant”.

But Kristiina Kokko, secretary of the National Coalition Party, was surprised by Chen-Ye’s union activities.

“This type of commitment should have been disclosed to us proactively [on Chen-Ye's part],” said Kokko.

135 Fuyou Street in Beijing is the headquarters of China’s United Front Work Department, which operates under the Politburo, the supreme leadership of the CCP. Its importance can be traced back to the era of Mao Zedong, who swore by three “magic weapons”: the United Front, the Red Army, and the CCP itself.

Current leader Xi Jinping has returned to Mao's strategy while trying to further the same mission.

“[The CCP] must establish relations with the world outside of itself and make it work in a manner favorable to China. The means are a mix of networking and propaganda, but in some cases, information leakage to Chinese intelligence,” wrote the Yle report.

In the countries that have been infiltrated by China, the Chinese powerhouse operates in a vast gray area. Yle was able to find out how three such organizations operate in Finland. 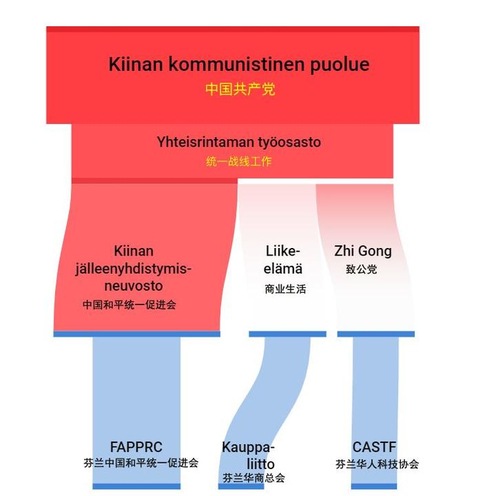 Under the Chinese Communist Party (Kiinan kommunistinen puolue) is the United Front Work Department (Yhteisrintaman työosasto), which has 12 branches. In Finland, FAPPRC belongs to the China Council for the Promotion of Peaceful Reunification (Kiinan jälleenyhdistymis-neuvosto, CCPPR), the Finnish Chinese Business Council reports to the business (Liike-elämä) function, while CASTF (Chinese Science and Technology Association) is connected to Nordic Zhi Gong Association.

Numerous other China-adjacent agencies, such educational organizations and cultural associations, have been found in various countries. The article goes into detail about the activities of these groups in response to opinions unfavorable to Beijing.

“United Front players are not merely seeking to market China in a positive light. Some activists also try to silence those who criticize authoritarian power.”

National Coalition Commissioner Chen-Ye also attended a Chinese-led demonstration in Helsinki on August 17, 2019. The irony in having the bourgeois party of the Finnish government involved in the activities of the Communist Chinese-led organization was lost on her.

“The organization oversees peace outside China,” she added.

The Yle article goes on to say that this “model seems to come from the same Chinese playbook.”

“[Stopping] protests are one of the core tasks of unity associations and many other Chinese organizations around the world, in countries such as Finland, Canada and New Zealand.”

In New Zealand, for example, the Unity Association there has mobilized its members after Chinese leadership has visited the country. The purpose is to drown out the protests of Chinese critics.

“Not only that, associations from different countries have the opportunity to exchange information on their activities at major international events. The leading figures of the Finnish Unity Association have also participated in this exchange,” the article explains.

Erlin Yang was a candidate for the municipal elections in 2017 in Helsinki. He has also formed a multi-faceted association and business group that collaborates with Aalto University, the cities, the Parliamentary Friendship Group of China and the Communist Party of China.

China-based Tekway, a Yang-led company, provides consulting and translation services to companies seeking to enter China. He also brings groups of Chinese visitors to Finland and provides access to the Finnish Parliament for some groups. Yang brought his own group, for example, to the China Day event organized by the Parliamentary Friendship Group of China in 2018. The Friendship Group was headed by MP Mika Niikko at the time.

The Chairman of the Foreign Affairs Committee, Niikko, has been in the spotlight many times this year because of his close contact with China. Yang is not only a co-worker of Niiko and Vähämäki but also a political partner to them. They in turn attend events organized by Yang. In 2018, Niikko was a speaker at Yang's Investment Seminar. In 2019, the opening speech at Yang's seminar was given by Tom Packalén, a Finnish MP and member of the Foreign Affairs Committee.

Yang also cooperates with the Commonwealth of China. He hosted a joint front visit to Helsinki last year and signed an agreement with his visitors. The meeting was organized by the Finland China Trade Association, founded by Yang. An agreement between the United Front delegation from Xian City signed the agreement with Yang, which made the Yang Trade Union Association a "focal point" of contact between the United Front’s Foreign Chinese Association and Finland.

“Information about the cooperation agreement has been published on the website of China-led Tekway, a company run by Yang. However, information on the establishment of a focal point has been deleted from the text in February,” wrote the Yle report.

Science and Technology: “The Front Line of the United Front Was Clear”

Australian researcher Alex Joske, a China expert, has also noted another issue from Finland and the other Nordic countries: Chinese Science and Technology Associations.

They too are linked to the Communist Party's control mechanism, he says, “The common front is intended to bring advanced technology to China, in addition to political efforts.”

In a similar way, the Finnish Security Police has also noticed this. Earlier this year, it told Suomen Kuvalehti (The Finnish Magazine) that China may have used influential organizations, such as various science and technology associations, for its intelligence operations. This manipulation is often done under the guise of something else, such as research.

At least one science association operating in Finland of Chinese origin has a connection to the Chinese control apparatus. The Chinese Association of Science and Technology (CASTF) has been active in infiltration activities, according to a report by the High School, in a way that is also seen in other countries.

“The link [to the CCP] can be found through the Chinese Zhi Gong Party, one of China's eight official small parties,” wrote the article. “It is not an independent entity, like how the West understands a political party, but a tool of the Communist Party to reach the intellectuals.”

One of the party's tasks is to make well-educated Chinese work towards the CCP's goals. It is under the direct authority of the United Front, and it also happens to have its own Nordic association in Stockholm. The event is also reported by the American magazine The Atlantic, which stated that “the front line of the United Front was clear” at the event.

Chen-Ye, the Coalition Commissioner for the City, had attended the CCP's festivities for the People's Republic's 70th anniversary in Beijing. The ceremony at Tiananmen was not accessible to anyone, but was reserved only for invited guests.

Chen-Ye says she attended the ceremony “at the invitation of Beijing”. Zhang Hongbo, Chairman of the Finnish Science and Technology Association (CASTF), was also present with her.

A local online publication tells of how the “Qingtian Girl” has been promoted to City Council in Finland. In the pictures, she appears in various events at the Coalition. In one photo, Chen-Ye poses with a Chinese flag in hand to welcome President Xi Jinping to Finland.

“I am first and foremost a Chinese person. I want to protect the Chinese people both in China and abroad,” Chen-Ye said in the story, which was copied to several other Chinese websites.

Similar infiltration attempts also exist in other countries, according to the report. Swedish citizen Gui Minhai disappeared in Thailand in 2015 and was later found arrested in China. Gui had set up a bookstore in Hong Kong that sold books that criticized the Chinese government. China sentenced Gui to ten years in prison in late February 2020.

Relations have been further cooled by China's hard-line ambassador to Sweden, who has accused the Swedish media of several “vicious attacks” against the Chinese Communist Party and the state. Sweden has also studied the operation of the Chinese influence machine within its own borders. As a result, a Swedish Christian Democrat who joined the United Front had to resign.

In Australia, a Chinese billionaire had donated millions of dollars to various parties in the country. In another case, the CCP reportedly sought to bribe a man of Chinese origin to become a candidate for the Liberal Party. The man was found dead in a hotel room after he told the Australian Security Service of the bribe.

“[China] is not just trying to influence policy making. It seeks to reshape our reality so that it is perfectly normal for a politician to work with the Chinese Communist Party,” said Joske in the Yle article.