(Minghui.org) China has a huge internet army to control public opinion and push its agenda. Often known as the “50-cent army,” the internet army consists of ordinary citizens who are usually hired by marketing companies or propaganda departments and paid 50 cents for each post.

As more and more countries are stepping up their criticisms of the Chinese Communist Party (CCP)’s cover-up of the coronavirus epidemic, the CCP’s internet army is also becoming ever more active in promoting its propaganda in attempts to whitewash the CCP’s lies and culpability.

According to an investigation by Taiwan’s Ministry of Justice Investigation Bureau, there has been a surge of fake news since late February regarding the coronavirus pandemic, with 70% of the news coming from China.

Another report by The Epoch Times, titled “Revealing the Operations of China’s Official Troll Army System,” indicated that the Chinese internet troll includes “a ‘professional army,’ a ‘local army,’ and ‘internet commentators’” and that “[all armies] must make sure to cooperate with each other well… have meetings regularly to discuss the hot internet topics and direct public opinion. Each member must have his or her goal…and complete their missions.”

It was reported that the Chinese regime is planning to hire nearly 10 million trolls, including 4 million from colleges and another 6.23 million from society at large, to ramp up its information war in the coronavirus pandemic age.

Taiwan’s Central News Agency zeroed in on one specific example of such fake news. On a Facebook page, a person named Sun Xiaochuan, posted the following message, “The military has taken control of Taipei. Tsai's administration is burning people who have contracted the disease.” He also included a poorly photoshopped image of a fire in front of the Presidential Office Building with the post.

Another Twitter account also with the name of “Sun Xiaochuan” posted more fake photos of deceased coronavirus patients, claiming that the epidemic in the southern city of Tainan was so dire that there were corpses floating in the river.

On WeChat, a message about the U.S. was posted on a study group of “Selected Works of Mao Zedong.” 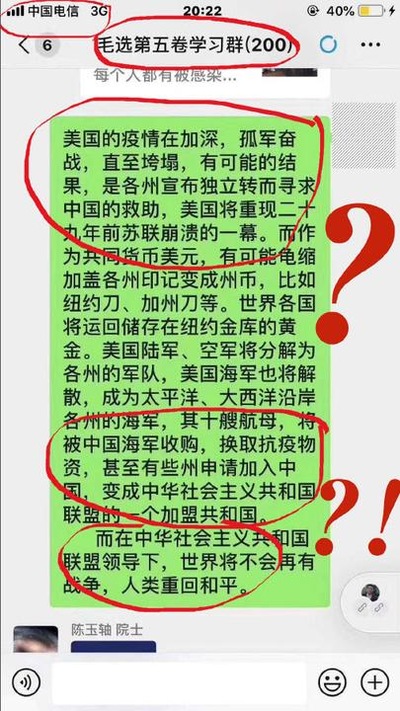 The top of the message says “Selected Works of Mao Zedong (200),” while the main text in the green box was translated below.

The message said, “The epidemic in the U.S. is worsening. Each state is fighting the coronavirus on their own and they are running out of resources. The most likely outcome is that each state secedes from the federation and seeks help from China. The collapse of the Soviet Union 29 years ago will happen again in the US.”

It went on to say, “This means that each state might put their seal on the US dollars and make that their state currency, such as New York dollar or California dollar. Other countries will take back the gold they are saving in New York. The U.S. Army and Air Force will be decomposed into the army of each state. The U.S. Navy will also be disbanded and become the navy of the states along the Pacific and Atlantic coasts. The ten aircraft carriers owned by the U.S. will be acquired by the Chinese Navy in exchange for supplies to fight the epidemic. In addition, some states will apply to join China, becoming a member of the Chinese Socialist Republic. Under the leadership of the Chinese Socialist Republic, the world will no longer have any war and humankind will return to peace.”

Some other social media posts with similar sentiment of Chinese nationalism claimed that people of Chinese descent in India, Vietnam, Kazakhstan, Myanmar, and throughout the Middle East are eager to return to China.

One such post was titled “Why Kazakhstan is eager to return to China” and published on privately-owned Chinese website sohu.com. Kazakhstan’s foreign ministry summoned the Chinese ambassador to protest the post, which was eventually taken down from sohu.com.

Document Reveals CCP’s Guidelines on Propaganda Targeting the Coronavirus in the U.S.

Despite Censorship and Massive Propaganda, Chinese Citizens Fight to Voice Their Opinions on the Pandemic