When we got to our hotel, our eyes fell on a poster of a beautiful, towering mountain. An employee said it was one of the highest in China and very dangerous—Mount Hua Shan. We knew it was our next destination. I was a little hesitant because my funds were diminishing rapidly. I questioned whether we were going there out of an attachment to escape the pollution and crowds of the city, but the brothers were firm about wanting to go.

On the way there, our van broke down, and I thought it was a hint from Master that we shouldn’t be going. The seats were soaking wet. I wondered why on earth someone would wash a van like that unless they were trying to clean up blood. Was the van used to carry practitioners? My imagination ran wild. When I caught a glimpse of the driver’s eyes, I saw that they were yellow. He always looked at us sideways and with displeasure. As my suspicion mounted, I was ready to take the bus back to Xi’an. Just then, the van was fixed and we were told to get back in.

Once we got to the mountain, I knew why we went. I stood at the bottom in awe. It seemed as though the whole mountain was made of solid tranquility (ding). I had been to high mountains before, but this one was somehow different. Mt. Hua Shan seemed to be teaching me about being in tranquility.

We started to climb the steps that were carved out of the rock. We climbed for over an hour and did not feel tired or hungry although we had little to eat. We found a small bridge and decided to practice the Dafa exercises. That was the first time we could do the exercises out in the open since we entered China. It was as if the whole mountain was asking us to close our eyes and practice. Having any thoughts was almost painful to my brain.

Mt. Hua Shan was the most profound experience of the whole trip for me. My brain seemed to remember it as Mt. Fa Shen because it seemed to be full of Master’s presence.

“Are You Falun Dafa Practitioners?”

Back at the hotel that night, my travel companions were asked, “Are you Falun Dafa practitioners?” They said yes. The person who asked was a practitioner from Xi’an who had also lived in Sydney. Just that afternoon, she and her husband had seen a photo in a Hong Kong newspaper showing the two brothers practicing the exercises during the conference. They were surprised to see us in Xi’an. We knew that it was not a coincidence and saw the perfection of Master’s arrangements.

In fact, the only people who asked the question for which we had tried to prepare were friendly, smiling practitioners. 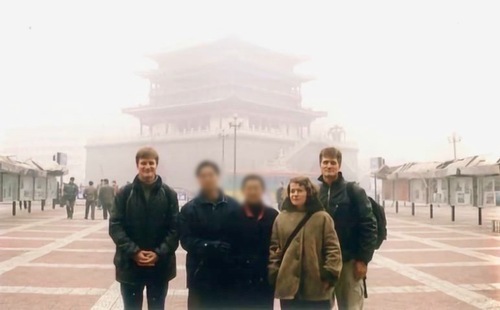 The three of us with two practitioners in Xi’an

We decided to organize a small experience sharing meeting and invite other practitioners from Xi’an. The next day, we went to a tea house with private rooms and talked for more than half a day. However, no other practitioners came except for her and her husband. She told us that Xi’an practitioners had lost contact with one another after the crackdown started. Many stopped practicing, and those who continued did so in secret. They did not make efforts to appeal to the government.

We talked about all the tests we had faced in Australia when promoting Dafa and asking for the Australian government’s help. We talked about our tests in China and told her how wonderful it was to visit Mt. Hua Shan. She then told us that Master Li had actually been there when he was starting to teach the Fa publicly, and how he met with cultivators who had cultivated on that mountain for hundreds of years.

When she said this, I recalled how the stairs we started to climb became a vertical wall, forcing us to stop and turn back. But when we were at the bottom contemplating how to climb the mountain, I saw in the corner of my eye a skinny man in Daoist robes with his hair in a small bun on top of his head. His eyes seemed totally devoid of human sentimentality.

“How Does China Compare to Democratic Countries in Its Handling of Coronavirus Crisis?”