Overseas Chinese Flee to China for Safety, Only to Face Accusations of Poisoning Their Homeland

(Minghuir.org) The deadly coronavirus swept China earlier this year and then the world. As infection cases explode in Western countries, the Chinese Communist Party (CCP) has reported few new cases since the beginning of March, creating the impression that the epidemic is over in China. Many pieces of information provided by medical staff in China, however, point to a different reality.

In Beijing, hospitals have stopped performing blood tests for coronavirus so that new cases wouldn’t be confirmed. One medical worker in Wuhan also revealed that none of the patients released from his hospital were tested for the virus, and he estimated that the majority of the patients hadn’t recovered and still carried the pathogen.

Because of the underreporting of infection cases, many Chinese living abroad decided to fly back to China, which claimed itself to be “the safest country in the world” amid the pandemic. But to their shock, instead of being welcomed back by the “motherland,” they faced tough treatment and were accused of “flying back thousands of miles to poison their motherland.”

The CCP likely has two motives to declare victory over the coronavirus. On one hand, it attempted to glorify itself and comfort the Chinese people who had suffered the epidemic. On the other hand, it wanted to portray itself as the world leader in fighting the virus and promote the idea that its totalitarian system is superior to Western countries' democratic system.

“Though the motherland is not that rich yet, at the critical moment, she will spend all she has for her children!” another post claimed.

Seeing such a rosy picture, many overseas Chinese, especially students studying abroad, went back to China.

As soon as they landed in China, however, most people were directly taken to hotels and forced to undergo a 14-day quarantine. Many of them were appalled by the horrible living conditions in the quarantine hotels.

A Twitter user with the name @niuniu__Liu wrote on March 15:

There was a family of three who just returned from Thailand. They came to Caidian District in Wuhan. The community officials took them to a quarantine site using a garbage truck (supposedly disinfected). They had to carry their child on their legs and sat in a place that looked like a public restroom for a whole night. Social workers told them that this site was next to a pop-up hospital and was to hold people who had close contact with infected patients. The staff all wore protective suits, but the family had no protection at all.

A student returning to Shanghai from the U.K. said that he was taken to Pudong Hospital directly from the airport. Not only was he confined there, but he also had to stand in a corridor for 15 hours and given no food or water for two days.

Twitter user @goodgirland1 posted a video on March 18 showing that the room they were taken to had been used by infected patients. The quilt was not changed, and the room was not cleaned, not to mention disinfected. Fruit skins, hair, and pills were seen on the ground.

The stay wasn’t free either, and they had to pay a high price for it.

After experiencing the hard reality themselves, these Chinese warned those who are still in other countries: “Do not come back.”

Even worse, the CCP pitted people in China against the returning Chinese. Some people in China started to blame the latter for bringing trouble to the country and cursed them: “You were not here during the country’s development, but you are the fastest to fly thousands of miles back to poison China.”

Why Did Overseas Chinese Believe the CCP?

One may wonder: why did these Chinese living overseas believe the CCP so easily and rush back to China?

The biggest reason is that although many of them live in Western countries, they didn’t bother to learn the culture and value system of the West. They stuck closely with the Chinese community, read Chinese media, and turned a deaf ear to the free media in the West.

Additionally, with the increased user base and influence of WeChat, the CCP is also using it as a platform to spread misinformation to control public opinion. 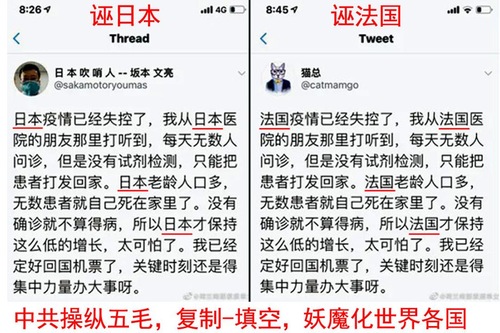 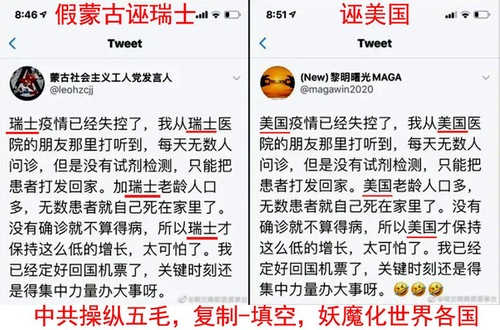 The epidemic in (country name) is out of control now. I heard from a friend working in a hospital in (country name) that countless people come to the hospital every day. But they don’t have the testing kits and have to send the patients home. (country name) has a large aging population, and countless people have died in their own homes. They are not included in confirmed cases if they are never tested. That’s why (country name) has maintained such a low infection rate. It’s just too scary. I’ve booked my return flight to China. At critical times, we have to concentrate our resources on doing big things.

After seeing this type of message, many Chinese rushed back to China, even as one-way ticket prices increased to 180,000 yuan (about 25,000 USD) in some cases.

These overseas Chinese weren’t the first to fall victim to the CCP’s lies. There have been many such cases in modern history.

After the CCP won the civil war against the Kuomintang, a large group of scientists including Ye Qisun, Rao Yutai, and Wang Jiaqi, either returned from the U.S. or Europe to China, or stayed with the CCP after Kuomintang soldiers retreated. However, they were targeted in almost every subsequent CCP political movement and suffered many forms of abuse.

After the Korean War, the United Nations Command captured 21,000 Chinese Prisoners of War (POWs). Among them, 14,000 asked to be sent to Taiwan, expressing that they’d rather die than go back to the CCP’s rule. The CCP sent representatives to try to persuade them one by one, but 90 days later, they only lured 440 soldiers back to mainland China. The remainder were handed over to Taiwan on January 23, 1954 and became truly free. Meanwhile, those who returned to mainland China were isolated, investigated and later targeted in political campaigns.

This time with the coronavirus pandemic, it was because of the CCP’s cover-up that the world missed the golden period of time to prevent the virus from spreading. But instead of reflecting on itself, the CCP attempts to shift the blame to other countries and boasts how it has “successfully defeated” the virus.

The CCP is “waging a massive propaganda campaign to rewrite the history of COVID-19 and whitewash the Party’s lies to the Chinese people and the world,” said U.S. Sen. Ben Sasse and Rep. Mike Gallagher in an open letter to Twitter’s CEO Jack Dorsey urging him to ban CCP officials from the site.

While the CCP tries to depict itself as the savior of the world, the biggest victims in this unprecedented disaster are the Chinese people, whether they’re in China or abroad. The self-serving CCP has proved to the world again and again that they are willing to sacrifice the interests and even lives of the Chinese people to maintain its power in China and achieve its ambition to take over the world.

“With Mother and Wife's Lives Claimed by Persecution of Falun Gong, Shandong Man Sentenced Again for Their Shared Faith”