(Minghui.org) The Wuhan coronavirus has spread to nearly 200 countries and regions in the world, infecting 683,694 people and killing more than 30,000 as of March 29.

The Chinese Communist Party (CCP) has reported 81,439 cases of infection and 3,300 deaths. In Wuhan, the epicenter of the pandemic, a total of 2,531 deaths have been reported by the Chinese National Health Commission on March 25.

By contrast, Italy reported 92,472 cases of infection and 10,023 deaths, and Spain saw 78,797 infection cases and 6,528 deaths. China's low official death toll has raised questions about the accuracy of its data. Many pieces of evidence, such as Wuhan's crematoriums running non-stop, are pointing to a much higher death toll.

In the past few days, the funeral homes in Wuhan have begun to allow families to pick up the ashes of their loved ones who died from the virus. It was reported by the Chinese media Caixin that one funeral home received a total of 5,000 urns in two days and that the figure of 5,000 was already higher than the overall reported deaths in the entire country.

While it may never be possible to get an accurate number of coronavirus-deaths in China, the following two estimates may provide some clues to the scale and severity of the disaster.

There are seven major crematoriums in Wuhan, with a total of 74 furnaces, according to Li Zehua, a former host of China Central TV (CCTV) who investigated the coronavirus outbreak in Wuhan in mid-February.

Interviews with crematorium officials indicated that all crematoriums in Wuhan have been working non-stop since the Chinese New Year (January 25).

On February 3, Huang, a Wuchang Funeral Home employee, revealed to Guyu Lab, a Chinese media platform affiliated with Tencent, that from January 26, the second day of Chinese New Year, employees were required to report to work, no exceptions. “We work 24 hours a day. Our four phone lines are operating 24 hours a day, and the staff is exhausted,” Huang said.

Li Zehua’s visit to Qingshan Funeral Home on February 21 confirmed Huang’s account of the heavy workload in Wuhan’s crematoriums. Li said that, by the time he left around 11 p.m., the furnaces were still running.

Li was arrested not long after his visit to Qingshan Funeral Home.

Wuhan authorities reported an average of 40 coronavirus deaths per day between January 12 and February 19. If the official data was to be believed, it wouldn’t take more than three hours per day for the 74 furnaces to handle the 177 bodies (40 coronavirus deaths plus 137 non-coronavirus-related deaths), which contradicts the data from their 24-hour operations above.

In addition, the authorities also deployed 40 mobile incinerators to Wuhan in mid-February, claiming they were being used to burn animal carcasses and medical waste. Each incinerator can burn up to 5,000 kg of waste per day. Assuming an average weight of 65 kg per person, one incinerator could burn approximately 77 (=5,000/65) bodies each day. If all 40 incinerators worked simultaneously, they were capable of handling 3,080 (=77 x 40) bodies each day. This daily estimate of 3,080 exceeds the reported 2,531 deaths in Wuhan.

2. Massive Shipment and Distribution of Urns 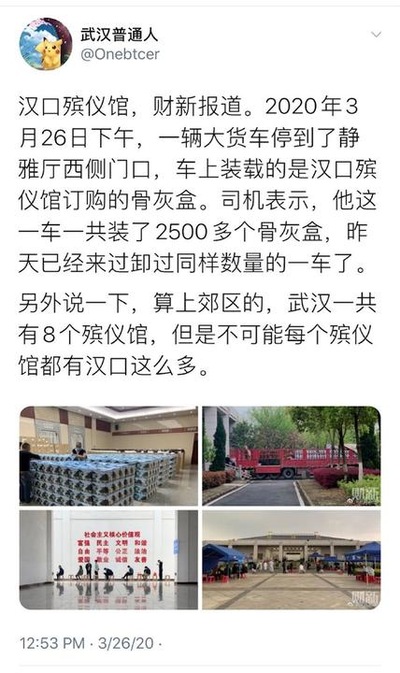 Screenshots from social media of people lining up outside the funeral homes to get their loved ones' ashes.

In Guyu Lab's interview with Huang at the funeral home, Huang said, “Some patients never got to see their family members from the moment they were hospitalized. All funeral services were banned. Family members of the deceased are expected to come and pick up the ashes when the epidemic is over.”

According to Radio Free Asia, beginning March 23, the seven major funeral homes associated with the crematoriums began to distribute 500 urns every day to the families of those who'd died of the coronavirus.

According to the Chinese media outlet Caixin, Hankou Funeral Home received two shipments of 5,000 urns over the course of two days (March 25-26). Those who didn’t make an appointment had to wait in line for five hours to get the ashes.

Wuchang Funeral Home told a local resident that they were hoping to finish distributing the ashes by April 4, the traditional Ching Ming Festival, or tomb sweeping holiday.

Three Months in Review: The Spread of Coronavirus from Wuhan to the Rest of China and Other Countries

The Big Test of the Year of Geng-Zi

“Flushing, NY: Vehicle Procession Calls on Locals to Distance Themselves from the CCP”