(Minghui.org) Today's news from China includes incidents of persecution that took place in 7 cities or counties in 2 provinces, where at least 16 practitioners were recently persecuted for their belief. 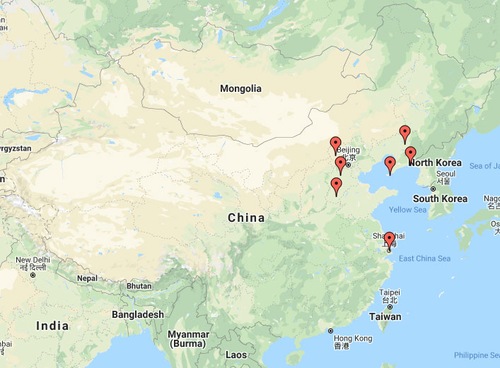 Ms. Zhang Yumei, Ms. Liu Jun, Ms. Cao Yulian, Ms. Xu Yanfei, and another practitioner, from Yangtian Township, Chicheng County, were arrested by officers from the local township government and police station on February 13, 2020, for distributing informational materials about the persecution of Falun Gong. Their non-practitioner driver was also arrested.

The next day, director Wang Jiang and other officers from Yangtian Township Police Station took the five practitioners to Chicheng Police Department. The police ransacked the practitioners’ homes and confiscated computers, printers, materials, and other personal belongings.

Mr. Zhang Yongxiao from Qizhen Village, Nanliyue Township, was arrested by officers from Nanliyue Police Station on February 5, 2020, for posting information about the persecution of Falun Gong.

Mr. Zhang's home was ransacked, and Falun Dafa books, a picture of the founder of Falun Gong, and other personal belongings were confiscated. He was released the following day.

Mr. Zhang's home was ransacked again on February 6 by Li Bin (李彬), the head of Quzhou County Domestic Security Division, and other officers.

Ms. Liu Xuefen, Ms. Wang Gairu, and Mr. Han Fuguo, 76, from Zhaozuo Village, Dongwang Town, were arrested by the town's deputy mayor on February 11, 2020, for distributing information about the persecution of Falun Gong. They were taken to Dongwang Police Station.

Mr. Han was interrogated and had his fingerprints taken. He was released later that night.

Ms. Liu and Ms. Wang were held in the police station overnight. They were taken to Dingzhou City Police Department the next day and interrogated.

They were then taken to a hospital for a physical and transferred to Dingzhou Detention Center. However, the detention center refused to accept them because they had high blood pressure.

They were taken back to Dongwang Police Station and only released after their families were forced to write guarantee statements for them.

Ms. Xiao Caiju and her sister, Ms. Xiao Caiyun, were reported to the police on February 15, 2020, for talking to people about the persecution of Falun Gong. Ms. Xiao Caiyun managed to escape.

Their home was ransacked by officers from the local police station and Yuhong Police Department that evening.

Mr. Gu Hua from the Pudongxin District was arrested at home by Gaoxing Police Station officers on February 12, 2020. His home was ransacked. He was taken to Zhangjiang Detention Center.

Ms. Zhu Weijun is incarcerated in the 12th Ward of Liaoning Province Women's Prison. She is not allowed access to her funds to buy daily necessities in the prison shop, because she refuses to renounce her faith.

Mr. Qu Xiaohui was arrested on June 3, 2019, for talking to people about the persecution of Falun Gong. He was sentenced to three years in prison with four years probation and fined 10,000 yuan by the Zhenan District Court on September 25, 2019.

Ms. Wang Fuhua was arrested on June 6, 2019, and sentenced to a one-year prison term by the Zhenan District Court on October 25. She is incarcerated in Liaoning Women's Prison.

“Our Calendars Help Us to Clarify the Truth”