Both U.S. President Donald Trump and Secretary of State Mike Pompeo have called out the Chinese Communist Party (CCP) for covering up the situation in China and allowing the outbreak to evolve into a pandemic.

In the coronavirus task force press briefing on March 21, President Trump said “China was very secretive,” and he wished China “could have told us earlier about what was going on inside.”

During an interview by the Washington Watch radio program on March 24, Secretary Pompeo emphasized that the CCP's cover-up of coronavirus information not only harmed the Chinese people, especially those in the epicenter of Wuhan, but also put the entire world at unnecessary risk.

Pompeo had repeatedly expressed his frustration over the CCP's mishandling of the outbreak. During a March 18 interview with Fox News, he pointed out that the CCP did not do the work to suppress the virus; instead, it covered up what was happening and “put countless lives at risk.”

Addressing a Chinese diplomat's claim that the U.S. military may have brought the coronavirus to Wuhan, Pompeo said, “This disinformation campaign, which began when we began to call out this risk that was created not only for the Chinese people, but now we can see people all across the world where the Chinese government knew about this risk, had identified it.” “They were the first to know, and they wasted valuable days at the front end, allowing hundreds of thousands of people to leave Wuhan to go to places like Italy that’s now suffering so badly.”

Pompeo also said in the White House press briefing on March 20, “When you see a delay in information flowing from the Chinese Communist Party to the technical people who we wanted to get into China immediately to assist in this, every moment of delay connected to being able to identify the risk vectors, creates risk to people all around the world.”

Pompeo said that the U.S. was clearly aware of China, Russia, and Iran's coordinated efforts to disparage what America was doing and urged these countries “to knock it off.”

“There are a handful of other things we’re engaged in to make sure that the right information is out there and accurate information is given,” Pompeo said.

In an interview with Fox News on March 20, Mark Esper, U.S. Secretary of Defense, said it was “completely absurd” for China to blame the U.S. military for the coronavirus.

“If the Chinese government had been more transparent early on — we are talking late fall, December at least — we would all, all of us, all the nations of the world, would have been able to get our arms around this and contain it in China where it began,” said Esper.

Chinese People Most Harmed by Misinformation 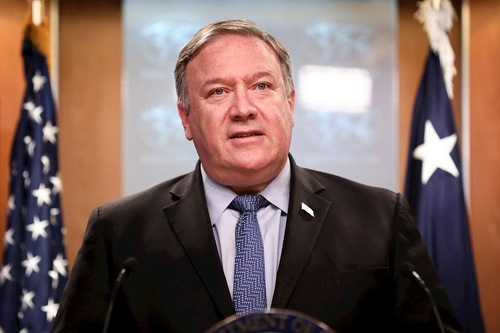 Pompeo: “The people most harmed by Chinese disinformation, the fact that they covered this up early, were the people of Wuhan and Hubei, China.”

In his interview with Washington Watch on March 24, Pompeo reiterated the origin of the outbreak: “This virus began in Wuhan, China. There’s no doubt about where it began. Indeed, the Chinese Communist Party itself acknowledged that that’s where the virus began. The timeline on this is quite clear that they sat on this for over a month, and even then continued to deny that there was human-to-human transmittal of this disease.”

Pompeo pointed out that the CCP “sat on this information and didn’t do the right thing, and instead punished doctors who were attempting to alert the world about what was taking place there in Wuhan.”

Pompeo is concerned that the disinformation “is still denying the world the information it needs so that we can prevent further cases or something like this from recurring again.” He worries that the CCP's cover-up will “have implications for a future health crisis that the world may face.”

He said that while the CCP disinformation was to mislead the public and “try to shift the focus and anger toward America away from themselves,” “The people most harmed by the absence of transparency and good governance are the people of their own country.

“The people most harmed by Chinese disinformation, the fact that they covered this up early, were the people of Wuhan and Hubei, China,” he reiterated.

While condemning the CCP for covering up information, Pompeo said that the U.S. wants “the Chinese people to be successful.” He expressed sadness “by all of the deaths that took place in China.”

He noted that every life is precious: “We’re going to treat every human being with the dignity and respect that they deserve because of the fact that they are God-made, those are things that fundamentally separate us from regimes like that in the Islamic Republic of Iran and the Chinese Communist Party,” he said.

National Post: Good People of China Have to Cure Themselves of CCP

In the past few days, the CCP has reported nearly zero new local infection cases, including in the epicenter, Wuhan. But many are questioning whether the regime continues to cover up information about the epidemic to deceive the world.

“The situation in China is unbelievable, the virus outbreak everywhere in this world except China, looks like the virus has a deal with the Communist Party,” China researcher Zhang Jian told NTDTV. “The virus first appeared in China, now the CCP blames other countries and calls all new cases ‘imported infections.’ It doesn't make any sense.”

According to an internal testing report from the Wuhan health commission obtained by The Epoch Times, 91 new patients tested positive for the coronavirus on March 14, but the official numbers of newly confirmed cases in Wuhan were only 4, 4, and 1 for March 14, 15, and 16, respectively.

“It would be optimistic to think Beijing isn’t continuing its deceit,” said Kevin Libin in an article titled “Beijing's communist regime is the biggest ‘China virus’ threatening our survival” published by the National Post on March 23.

Libin said at the end of the article, “This pandemic has cost our economies billions, if not yet trillions, and will cost us far more yet. Its human toll will be staggering and permanent. We will likely persevere, but what the world can no longer afford is the threat to our collective health and well-being that is the Chinese communist regime. As it desperately tries to salvage its legitimacy, let’s at least refrain from helping with that. This isn’t the first deadly viral epidemic to emerge from their country and it probably won’t be the last. The good people of China will have to cure themselves of this communist government if we all hope to survive the next one.”

“Podcast (Cultivation): “Clarifying the Truth in Our Family Businesses””