Melbourne, Australia: Sharing the Beauty of Falun Dafa at the 2 Worlds Festival

(Minghui.org) Falun Dafa practitioners in Melbourne, Australia's second most populous city participated in the 2 Worlds Festival on March 14, 2020. The event aims to promote indigenous culture and connect with other cultures in Australia. Practitioners joined the festival to share the beauty of Falun Dafa with the local community. 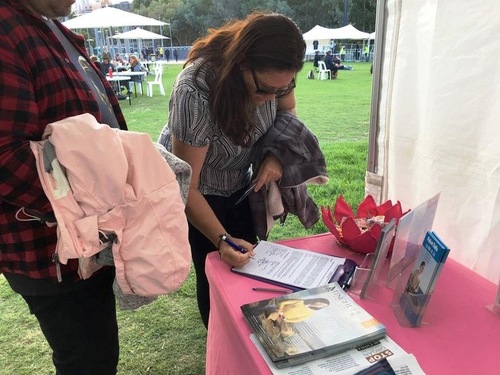 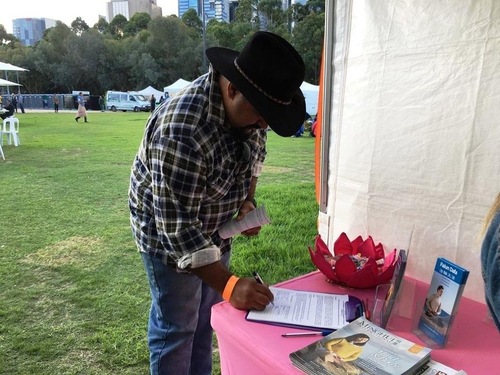 Festival attendees sign the petition calling to stop the persecution of Falun Dafa in China.

Many festival attendees were astonished to hear that the Chinese Communist Party's (CCP) has brutally persecuted practitioners for the past 20 years. Many were also impressed by the practitioners’ courage to step forward during such an overwhelming campaign of suppression. Cam Begg, founder of the event, was among those who praised the practitioners’ efforts. 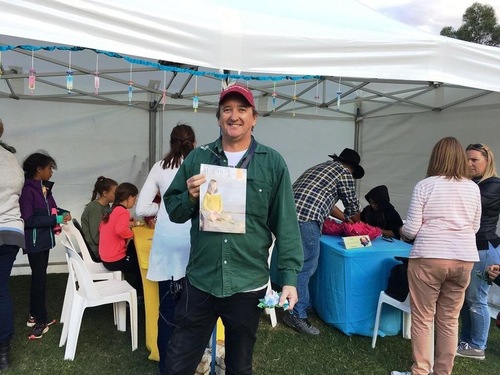 Cam Begg, founder of the 2 Worlds Festival, thanks practitioners for their help.

“I Won’t Believe Any Regime That Persecutes People”

Adriana showed great interest in Falun Dafa from the moment she saw the practitioners’ tent. While learning how to make hand-made lotus flowers, she asked practitioners about Falun Dafa and what has been happening in China.

After hearing that Falun Dafa practitioners in China are illegally detained and imprisoned for their belief, Adriana signed a petition urging the Australian Government to help stop the regime's crimes. “Thank you for telling me all of this,” she said, “It’s hard to imagine something so terrible has lasted over 20 years—from now on, I won’t believe any regime that persecutes people.”

She was also delighted to hear that the practice has improved practitioners’ health and moral character. “It’s great to find something like this to reduce stress, anxiety, and negative thoughts. I have been struggling with these problems for a long time,” she said.

Adriana wanted to start practicing Falun Dafa and asked where the practice sites are in Melbourne and how she could obtain a copy of the main book Zhuan Falun. She was happy to hear that all of the materials related to the practice are available for free at FalunDafa.org.

“You know, the world is kind of chaotic and everyone seems so selfish,” she said, “I like the principles of Truthfulness-Compassion-Forbearance—they are the universal values that our society is missing.”

Ben is the owner of a landscaping company. He was at the festival with his family. His two children were eager to learn how to make the lotus flowers, so he chatted with practitioners for a long time. 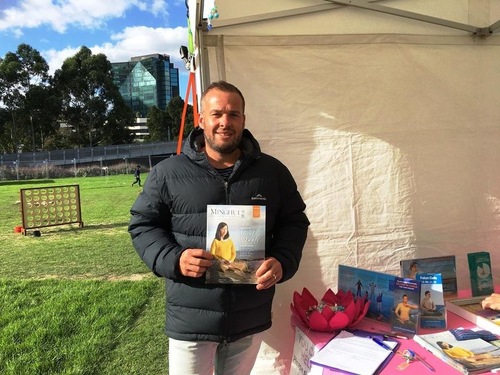 Ben watched the peaceful Falun Gong exercises and said the meditation looks great. He told practitioners that Truthfulness-Compassion-Forbearance are the principles that should serve as the basis for society.

“Now I understand why practitioners are so determined with their faith even when facing such a terrible persecution,” he said, as he signed a petition calling to end the forced organ harvesting from practitioners in China.

Vicki-Anne is now retired. She used to be the manager of an apparel factory in the State of Victoria and had been to China numerous times to purchase raw materials for her company. She said that every year, when she went on vacation in Queensland, she would see practitioners at events and had signed their petitions to show her support.

“The general public in Australia still knows little about what’s going in China,” she said, “When I stayed in southern China, I saw how ordinary people were mistreated—some have a miserable life, and some just disappeared with no clue. It was indeed scary.”

Vicki-Anne also said she appreciated the practitioners' hard work to raise awareness about the human rights violations against practitioners in China. Whenever she goes to Brisbane, she always sees practitioners informing the public about this important matter in the city center.

“I am looking forward to more information booths like this, because it is very important,” Vicki-Anne said, adding, “Please keep it up. We definitely need Truthfulness-Compassion-Forbearance in this society.” 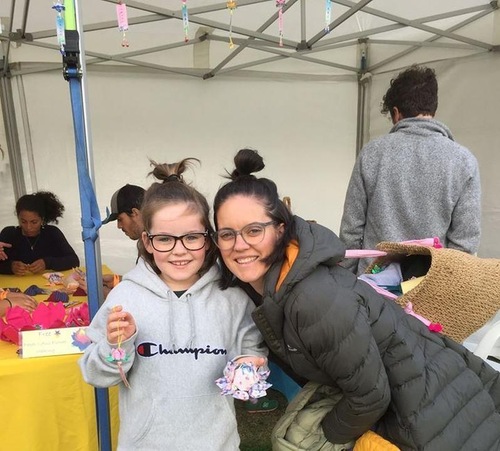 Mother and daughter are happy about making paper lotus flowers.

A Sense of Security

Sofia, a practitioner from Greece, recalled how she felt before she started to practice Falun Dafa: lost in the earthly world, like a boat without sail. She said the main book of Falun Dafa Zhuan Falun changed all of this for her.

“When reading the book [Zhuan Falun] for the first time, the profound meaning gave me a sense of security, since every sentence makes so much sense,” she said, “I was excited to find a way to perfect myself through the principles of Truthfulness-Compassion-Forbearance.”

Sophia said before she took up Falun Gong she did not care very much about others. After she started to practice, her mother commented that she had become friendlier and better behaved. As time passed, Sophia quit video games, regained her health, and reconnected with her family members. Because she changed so much, everyone in her family was grateful for Falun Dafa.

“Falun Dafa is a diamond in this secular world, extremely precious,” she explained.

Sophia left Greece eight years ago and lived in the United Kingdom before moving to Melbourne. She said she has found opportunities to share the beauty of the practice wherever she goes. The ongoing coronavirus pandemic has also made her think a lot. “The virus became a pandemic because of the CCP,” she said, “If all of us could embrace traditional values and move towards becoming better people—like Falun Dafa practitioners do––plus say no to the CCP regime, we would be blessed.”

“Clarifying the Facts to the Police in Beijing”