Young Entrepreneur: “If Not for Zhuan Falun, I Would Not Be Alive Today”

(Minghui.org) A Chinese book that has been translated into more than 40 languages has been read by millions of people around the world. A Polish youth found this book at a time when he had lost all hope and wanted to end his life. Not only did this book save him, it also revitalized his life.

Fabian's parents separated and started new families of their own soon after he was born. He was brought up by his grandparents. He never saw his parents smile at him lovingly, nor does he remember any warm hugs. “I became very miserable as I grew older because my classmates had parents, but I didn't. My grandparents were my parents.”

He always felt lonely. His grandparents took him to church, hoping he would believe in God, but Fabian found that some of the congregation did not practice what they preached. This made him decide to not believe in anything.

Fabian grew into an intelligent boy, and when he was a teenager he buried himself in books in search of knowledge. Teachers who taught him were intimidated by his intellect.

“I didn't like to attend classes, as I already knew what was being taught. It was too easy for me. When I asked my teachers questions, they would tell me that's how it's written in the textbooks. When I disagreed with my teachers' viewpoints, other students would jeer at the teachers. Consequently, my teachers disliked me,” he recalled.

Not happy with school, Fabian and several friends became hackers. They stole confidential information and data and sold it to companies, amassing a huge fortune. However, his conscience told him this would lead him to a dead end.

“I told my friends we should do the right thing, but they refused to listen. On top of that, my grandparents were getting on in age. I often worried what would happen to me if they were to die one day. I wanted to break free from this mire and leave this group of friends. I wanted to prove to my grandparents that I could support myself through my own efforts.”

Fabian left Poland and went to Germany. Because the money he had was earned through illegal means, he did not take a single cent. He had no money to stay in hotels and had to sleep on the streets, surviving on simple food. While pondering how he could manage, he met an old man in a bar.

“He told me he had a small business in Frankfurt that replaced lost or stolen locks. He was planning to start a similar business in Berlin. I shared with him many professional marketing ideas and he said to me, 'You are my employee now.'”

With Fabian's assistance, the company's customers and sales increased tremendously. He earned a lot of money and was promoted to a managerial level. He was able to buy gifts for his grandparents. But a phone call in 2016 shattered his world.

“I received a phone call from my grandmother while I was holidaying in Spain. She was crying at the other end. She told me my grandpa had passed away. The news was like a bolt out of the blue. Devastated, I started to think about who I was, what was I going to do from now on, what could I do, was the world really like that, should I keep making money?”

“Gradually, I began to think that money was not the most important thing, because it cannot buy time, nor was there a way to bring my grandfather back to life. I felt the people around me were no longer interesting and life was increasingly boring. I was immersed in painful emotions. When I saw a car while I was walking, a thought would suddenly come to mind, 'It wouldn't be a bad idea to get hit by the car.'”

Given a New Life

Fabian realized his thoughts were very dangerous. He posted a plea for help on the Internet: “Do you feel happy after making money? How do you find real happiness in life?” He received many replies very quickly. A few of the replies ridiculed him but most of them recommended good books.

He started to read the books suggested by netizens. There were more than 20 of them, including books on Christianity, Islamism, Buddhism, Confucius teachings and Zhuan Falun.

“I bought and read the books in the order they were recommended. When I opened the 15th book on my list, Zhuan Falun, and read the first chapter, I knew this was what I had been searching for,” he said.

As Fabian started to read Zhuan Falun, he discovered that he would gain new understandings every time he read it. “Sometimes I would ponder Master's teachings for a long time. Parts I didn't understand in the beginning, when I read them again I would gain a totally different perspective. It was really interesting.” 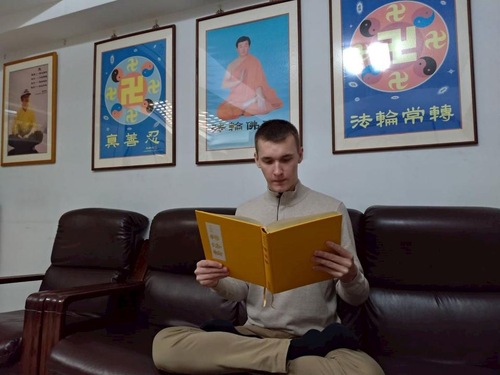 Fabian feels he would not be alive today if not for Zhuan Falun.

He shared another experience he gained through reading the book.

“In the past, I felt as if I was walking while holding a giant rock. It was so difficult to walk and breathe. Life was not worth living at all. My whole world was dark. By the time I read the first four lectures of Zhuan Falun, my body felt light as if I was flying. A light was switched on and my whole world became bright. I also experienced huge changes physically. I used to suffer from headaches and nosebleeds frequently. I kept seeing doctors and taking lots of medicine. Now I don't have to deal with these issues,” he said.

Although he faces the same people and things in life, Fabian sees everything from a new perspective. “I know that as long as I follow the principles of Truthfulness-Compassion-Forbearance taught by Falun Dafa, I won't be lost. No matter how hard it is, there is a solution for it. I would say that if not for Zhuan Falun, I would not be alive today.”

Realizing the Importance of Telling Others About the Persecution

Fabian visited China in March 2017 with a sense of gratitude.

“Zhuan Falun is such an amazing book and Master is from China, so I wanted to visit the country. But after arriving in Beijing, I saw anti-Falun Dafa propaganda everywhere. I was shocked. I quickly left Beijing and went to Guangzhou. When I asked locals what they thought of Falun Dafa, I saw fear on their faces. I was able to go to the Minghui website through software that helped me circumvent China's internet blockade. I read Master's lectures and learned about the Communist regime's brutal torture of Falun Gong practitioners.”

Upon returning to Germany, Fabian longed to tell people how wonderful Falun Dafa is and the unjust treatment faced by practitioners in China. He went to tourist attractions every day to do the exercises and hand out information. With other practitioners, he told German officials about the persecution in China and gained the officials' support. One day he asked a practitioner: “Why do you allow me, a new practitioner, to participate in raising awareness about the persecution? Aren't you afraid that I am a Communist Party member? The practitioner replied that if I was a spy, they hoped I would know the truth about Falun Dafa and stop being involved in the killing. I was extremely moved. It made me realize the importance and urgency of telling people about the persecution.” 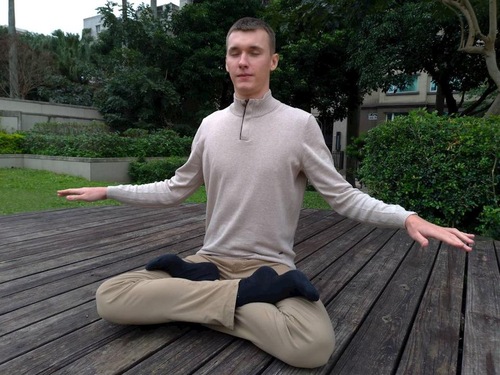 Fabian does the fifth Falun Dafa exercise – the sitting meditation.

Fabian started to do the exercises at his workplace so that his co-workers would have the opportunity to be introduced to the practice. At the same time, he became aware that the company's operations were unethical. When customers asked them to help break open locks, employees would take advantage of the situation to charge a high price. The company would even get staff to damage the locks while fixing the problem so they could sell expensive products to the customers. When Fabian tried to tell his co-workers it was not right to do such things they refused to listen because they were paid more for doing things like that. In the end, some of his staff lodged a complaint to the government that he was an incompetent boss who stopped them from earning money. The court even ruled against Fabian.

Unable to do things against his conscience and not able to get his co-workers to see things from his perspective, Fabian was caught in a dilemma. He knew he would be able to find a solution through Falun Dafa. He did the exercises in parks with practitioners and distributed brochures every day. He spent a lot of time with practitioners. Then one day, he knew what he should do. “I handed over the computer, keys and important information about the business to my partner. I then said goodbye to every co-worker and wished them a bright future.”

After letting go of his attachment to personal gain and giving up the business he had worked on for many years, Fabian felt at peace. He knew he had made the right choice.

One day in May 2018, Fabian was talking to a Chinese tourist about Falun Dafa in Munich when he received a phone call. “A friend told me my grandmother was seriously ill and in the hospital. I rushed to the hospital, but she passed away before I got there. Although I was very sad, I picked myself up within a day because I have Dafa in my heart. I already understand many things and I'm sure she has gone to a wonderful place.”

In 2020, at the age of 27, Fabian has a company in Portugal and Germany. He plans to start a third company in Taiwan. Meanwhile, he has reached out to his parents and their children, after not seeing them for a long time. The teachings of Falun Dafa have changed him. He stopped resenting his parents a long time ago. Fabian now treats everyone like his loved ones and hopes to tell them personally how Falun Dafa changed his life for the better.