(Minghui.org) For thousands of years, Chinese people have believed in traditional culture and acting in the interest of the common good. But this all changed after the Chinese Communist Party (CCP) took power decades ago. The situation worsened as the regime began to suppress Falun Dafa in July 1999, persecuting practitioners for their belief in Truthfulness-Compassion-Forbearance.

Through the consistent efforts of Falun Dafa practitioners to debunk the negative propaganda from the CCP, more and more people have learned the facts and chosen to break away from the regime and stand with the innocent. Their righteous actions, ranging from directly supporting practitioners to reciting the phrase “Falun Dafa Hao” (translated as “Falun Dafa is good”), have in turn brought them miracles and blessings.

One practitioner in Liaoning Province met an elderly woman, who lived in a rural village. Through a bit of conversation, the elderly woman learned about Falun Dafa and how practitioners have been punished for upholding their beliefs. Upon learning that the CCP had harmed a large number of Chinese people in its numerous political campaigns–including the persecution of Falun Dafa–she agreed to renounce the CCP organizations.

“You know, my husband has gastric cancer and has been in therapy for over six months,” the woman said, “But there’s no progress. I'm getting really worried.”

The practitioner went with the woman to her home, where her husband was bedridden–emaciated and unable to eat.

She told the woman's husband about Falun Dafa as well, from the health benefits it provides practitioners to moral elevation to its acceptance in over 100 countries.

After hearing her speak, the man agreed to renounce the CCP organizations and to recite the phrases “Falun Dafa Hao” and “Truthfulness-Compassion-Forbearance is good.”

When visiting them two weeks later, the practitioner found the man with a good appetite and the ability to walk around his yard. He sincerely thanked Falun Dafa and Mr. Li Hongzhi, the founder of the practice, for helping him recover. The couple said many village residents had heard about their story and were impressed by the miraculous effects of Falun Dafa. 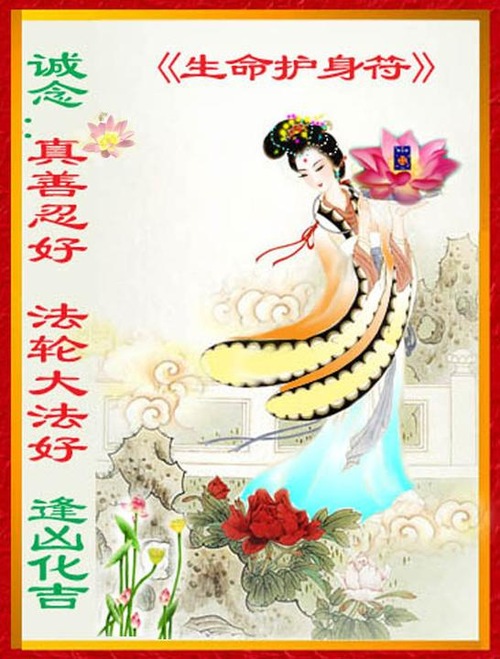 The woman also asked the practitioner for amulets thats carry the words “Falun Dafa Hao” and “Truthfulness-Compassion-Forbearance is good.” She said that she would give them to her children and relatives, so that they too would be blessed.

When a practitioner in Hebei Province walked by a river one day, he saw an old man sitting under the shade of a tree. The practitioner decided to talk with him.

Noticing the old man’s hands shaking, the practitioner asked, “Are you all right? What’s wrong with your hands?”

The man said he had Parkinson's Disease.

“I had been to the hospital, but the doctors could not do anything with it,” he said. “I heard that Deng Xiaoping [former CCP leader] also had this illness, but he died of it. He had all the best medical support and even he couldn’t survive, so I don’t expect much.”

The practitioner told him the facts of Falun Dafa and reminded him to recite “Falun Dafa Hao” as well as “Truthfulness-Compassion-Forbearance is good.” The man nodded.

When they met the following day, the man said he felt much better. He then quit the CCP organizations after they spoke further.

After a few days, the practitioner met the old man on the street again.

“Look at my hands—they’re perfect now and don’t shake at all. I don’t know how to thank you for everything.” The man's eyes were wet as he spoke.

The practitioner explained that it was actually Master Li who had helped him.

“Because Falun Dafa and Truthfulness-Compassion-Forbearance are righteous, you will be blessed when you choose to support them during this harsh persecution,” he explained to the man.

“34 Years after the Chernobyl Disaster, History Repeats Itself in the New Coronavirus Epidemic”